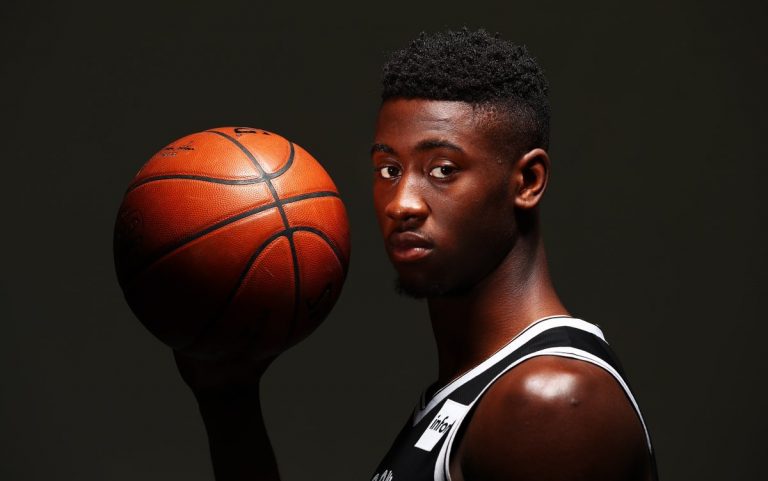 The Brooklyn Nets are 8-30 on the year, Jeremy Lin has been injured for almost the entire season, and there is no semblance of a defensive scheme. The season has long been declared a developmental one but the games are getting hard to watch, unless you know what to look for.

Caris LeVert has been one of the few bright spots on the dismal and depressing season for Nets fans. Since being activated on December 7th, his development and success have been one of the few things people can turn to and feel good about. In his debut game against the Denver Nuggets, LeVert went 0-3 from the floor but became the first Net since Chris Childs to post three steals in his debut.

Atkinson was slow to work him in, given his foot injury, but it seems like his minutes restrictions have been lifted. So far, he has risen to every challenge and looked better than expected against some of the NBA’s top competition.

On January 5th, he was tasked with the assignment of Paul George of the Indiana Pacers. In 21 minutes played, LeVert scored six points, dished out one assist, pulled down two rebounds, and swiped one steal. At first glance, it looks like a pretty pedestrian stat line, but LeVert held his own against one of the best wings in the world in George. He shot two of three from deep, which were his only attempts of the game.

George finished the game with 26 points on 10 of 18 shooting overall. LeVert was on him for most of his 21 minutes and was able to bother him with his length and athleticism. George was able to still score on him, but LeVert made him really work for it and put out a lot of effort on offense. Despite it not showing up in the box score, LeVert’s efforts didn’t go unnoticed.

His next game was maybe his most impressive since being put into a larger role; it came against LeBron James and the defending champion Cleveland Cavaliers. Despite losing 116-108, the Nets were able to keep things relatively close until the dreaded third quarter. LeVert played 27 minutes and finished with 19 points, five assists, and four rebounds while only turning it over once. When matched up against James, he didn’t look completely outmatched.

Great move by LeVert to find space vs LeBron in transition. If he can hit this consistently, he’s going to be valuable to Atkinson #Nets pic.twitter.com/1U1zW5iBjH

Impressive move by LeVert on DeAndre Liggins. Great job on the crossover to create space to drive, then stops on the dime for the fake #Nets pic.twitter.com/L5ISYmYzUC

If this doesn’t get you excited, idk what will. LeVert does a great job running the floor in transition and finishing through contact #Nets pic.twitter.com/AoXxezS18l

Love LeVert’s jumper, such perfect form. If this can become the norm for him, he will start making an impact, especially when Lin returns pic.twitter.com/aLa61UN5eL

On defense, he was able to disrupt his shot at times and clog passing lanes with his 6’10” wingspan. LeBron ended up having another MVP-esque performance, but LeVert was the only player in a Nets uniform that could even hang with him on defense. Lord only knows how LeBron would’ve gone off if Sean Kilpatrick or Bojan Bogdanovic on him all night long.

Against the Philadelphia 76ers on Sunday, LeVert had another game where he didn’t contribute much statistically, but his impact was felt. In 21 minutes he scored six points to go with two assists and three rebounds. He was the only Brooklyn player to post higher than a plus five in plus/minus. For scale, Bogdanovic was -14, Trevor Booker was -1, Spencer Dinwiddie was -17, Rondae Hollis-Jefferson was -19, and Kilpatrick was -12.

His primary defensive assignment was Gerald Henderson and Robert Covington, who were a combined 8 of 19 on the day. Covington was able to have some success against LeVert given his strong frame, but against Henderson LeVert shined. He was so good at closing out on shot attempts and eliminating as much space between him and the shooter as possible.

LeVert’s worst game since the increase in minutes came against the Atlanta Hawks, despite the impressive stat line of 11 points, two assists, and three rebounds in 23 minutes, he was a team worst -17 on the night. He faced Taurean Prince, Kent Bazemore, and Thabo Sefolosha for most of the night, and was able to keep them mostly in check. Offensively speaking he was still able to do what he wanted, but the defense as a whole was abysmal.

Taking a look at LeVert’s O from last night. 1st shot came against some incredible D. He does a great job rising up and wasnt phased D pic.twitter.com/dhODtPWlN1

LeVert cut through the Atlanta defense like a hot knife through butter here. Turns the corner, gathers, and contorts his body for the finish pic.twitter.com/7X9S169dnE

Love how unphased LeVert is by tight defense. Bazemore does a great job closing out, but LeVert calmly steps into his shot and hits it #Nets pic.twitter.com/fPYPLnzD9a

Sefolosha gave him the most trouble, but the entire defense was lost in this matchup. Six players scored in double figures for Atlanta on the night while seeing the court for less than 30 minutes, not a great ratio at all. Its tough to hold any one player responsible for something that is clearly not being taught in practice. The defensive scheme is something that will need to be addressed in the post season via a new assistant coach that is a specialist.

Last night against New Orleans, LeVert was matched up against the likes of Soloman Hill. LeVert was able to finish with 11 points, one assist, three rebounds, and two steals on four of eight shooting from the floor. His smooth jumper and smart shot selection were on full display, as he was again one of the few bright spots for the Nets.

LeVert is a natural behind the 3pt line. Notice his footwork, specifically how he steps into the shot to make sure he’s square. So smooth. pic.twitter.com/9dxYGZAFhi

Love LeVert’s handles and vision to find the opening in the defense. He used Brook’s pick to perfection before darting to the hoop #Nets pic.twitter.com/1luQy5rlnZ

One of LeVert’s two steals, this one he just timed the pass perfectly to swipe it away. If it wasn’t for the good foul, he couldve had and-1 pic.twitter.com/yRQ0poi8wn

2nd steal was another perfectly timed swipe, this time it turned into an emphatic dunk in transition. LeVert is a bright spot on the season pic.twitter.com/k0i2fvlwkH

Hill finished the night with 14 points on 50 percent shooting overall from the floor. LeVert’s wingspan and athleticism kept Hill in check. LeVert is so good at using his footwork and wingspan to ensure he is always in front of whoever he is matched up against. His defensive fundamentals are strong and well established. In contrast to Sean Kilpatrick or really anyone on the roster, LeVert usually looks good on defense.

Expect LeVert to average close to 25 minutes per game here on out. As long as he is healthy, Atkinson is planning on keeping him in the rotation. It’ll be exciting to see what he does in crunch time minutes and when Lin returns from another hamstring injury. Hopefully, he can continue to improve each game like he has so far. If he can, then this season won’t be a lost season, but the season Caris LeVert stepped out of the shadow of his injury and became the player everyone anticipated he would become.