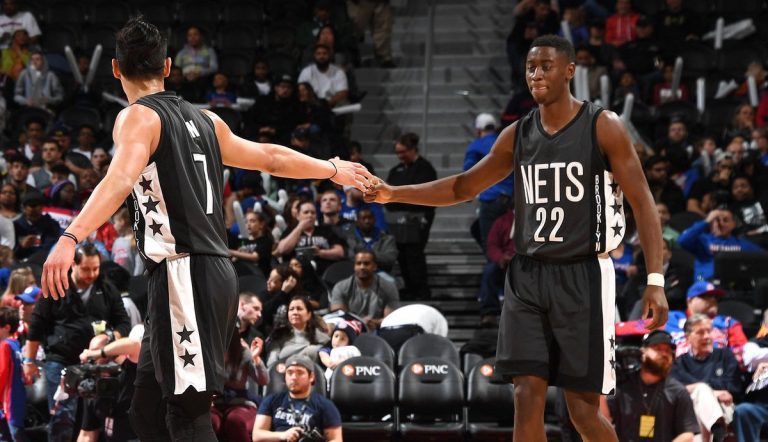 Caris LeVert was one of the most exciting players on the Brooklyn Nets to watch last season. Sean Marks swung for the fences by selecting LeVert 20th overall in 2016 and so far, this gamble has paid off.

LeVert used all four years of his NCAA eligibility playing for the University of Michigan. He had a rocky collegiate career injury wise. There were stints were some analysts projected him as a surefire top-10 pick yet leading up to the draft, Bleacher Report had him projected as the 44th pick. His time in Ann Arbor was plagued by a number of injuries to his lower extremities. Despite this, he did manage to average 16.5 points and 5.3 boards per contest during the Wolverines’ 2015-2016 campaign.

Even with all the questions about LeVert’s health looming around the 2016 NBA Draft, his high character remained consistent. The 6-7 wing penned an open letter through the Players’ Tribune to all 30 NBA franchises discussing the hardships he had sustained and how they made him a better person. This was likely a factor in him being selected dozens of picks ahead of his projected draft position.

Marks then cut a draft day deal to acquire the 20th pick from the Indiana Pacers in exchange for Thaddeus Young. Following this, Brooklyn did not hesitate to select the Ohio native. The Nets likely had LeVert in mind when trading into this spot, as Marks went on to say that he truly embodies an ideal, “Brooklyn Net.”

LeVert went on to become a rookie standout among a weak draft class. He scored more points in his 57 games than several lottery picks did over the course of a full season. Despite this limited number of games, he showed enough to become a regular starter by the end of the season.

On and off the court, there is perhaps no Net that is more likable than LeVert. His calm demeanor is perfect for a rebuilding situation. And of course, his high-upside and two-way potential provide Nets Nation with hope.

In looking at LeVert’s numbers as a whole from last season, they fail to represent his full potential. Putting up 8.2 points in 21 minutes per game on 32% shooting from behind the arc does not exactly scream star potential. Rather, it is small instances that better demonstrate why some believe he will be a star in the NBA someday.

This is just one portion of a small sample size that LeVert has shown of being able to create his own shot. In all of these instances, LeVert has not only demonstrated a fantastic ability to create space but also while doing it smoothly. He has a certain aura about him while pulling off these difficult feats that make them look second nature. This is a trait that cannot be taught and is only seen in some of the most gifted scorers that the NBA has to offer.

LeVert also displayed uber-athleticism in his rookie year. It was reassuring for many fans to see that this aspect of LeVert’s game had not diminished despite his multitude of injuries. Take a look at this highlight, during which the 21-year-old literally extends above the rim to then throw the ball down hard.

His 7-0 wingspan and 8-5 standing reach were displayed numerous times last season. This has particularly been demonstrated by LeVert in disrupting passing lanes, which is usually followed by heading out on the fast break full steam ahead. For all of his faults in isolation situations defensively, LeVert had some impressive moments playing off-ball defense last season. He even ranked in the top five in steals among rookies who played for at least half of the season.

Given the small sample size of LeVert that fans saw last season, it’s difficult to nitpick his positive attributes. However, looking at the bigger picture, LeVert possesses a skillset that is in large part why the Nets are extremely confident in him. Wings that are smart, athletic, can handle the ball, are gifted scorers and at the very least, have the potential to develop prototypical size, are extremely hard to come by in today’s NBA. In looking at NBA perfection, the Golden State Warriors have several players who fit this mold. Almost all of the Warriors’ wings and ball handlers have three very important qualities; athleticism, ability to create and shoot efficiently from behind the arc. They recently picked up two more players who should be able to do all three of these things under Steve Kerr’s leadership for close to nothing, in Nick Young and Omri Casspi.

In short; this type of player is extremely important in today’s NBA. LeVert has or is in the process of developing all these tools. If Kenny Atkinson can maximize them in the coming years, then the Nets have found a diamond in the rough in LeVert.

While some believe that injuries are the most worrisome aspect of LeVert’s future, there is perhaps a deeper problem. LeVert entered his freshmen year at Michigan weighing only 152 pounds. This is on CJ McCollum circa 2009 level of thinness. The only difference is that McCollum bulked up while LeVert currently only weighs in at 203 pounds which is ridiculously light for a player who is 6-7. Among players in the NBA who are 6-7, this makes him one of the eight lightest.

Putting in the time to increase his weight using safe methods will do wonders for LeVert. His diminutive frame may be part of the reason why he has sustained a number of injuries over the past several years. If LeVert fails to put on more muscle soon, then it’s difficult to not become worried about him going up against NBA bodies night after night.

Adding muscle will also help LeVert become a more polished player all-around. Instead of stepping back to create space in one-on-one situations, perhaps he would be able to mix it up by powering his way into the lane.

For example, Kevin Durant (ironically, LeVert was at one point nicknamed “Baby Durant”) couldn’t bench 185 pounds early in his career but he has since bulked up, added a post-game, and is in turn, one of if not the most complete offensive player in the league. Paul George is another swingman who took a vow to put on muscle in order post-up more. In 2014, he ranked dead last in post-up frequency among forwards who participated in at least 50 plays. The former Indiana Pacer has since achieved his goal while becoming a superb facilitator out of the post.

Another aspect of LeVert’s game that can improve as a result bulking up is on ball defense. This is an area that was a struggle in general for him last season. He allowed ball handlers to knock down 47% of shots, and nearly 40% of attempts from behind the arc. With ideal size, wingspan (7-0) and athleticism for a modern NBA wing, there is little reason to believe that LeVert can’t be an above average on ball defender eventually.

All aspects of LeVert’s game will benefit if he adds muscle. Filling out his frame will allow him to truly possess prototypical size for a wing in today’s NBA which will open up many doors for him in the future.

According to a report, D’Angelo Russell and LeVert are the only two untouchables on the Nets currently. This is logical as LeVert showed flashes of ultimately becoming a starting caliber player over time. It would be foolish to trade a player who has the potential to become something special in several years. Marks traded who was then the Nets’ second best player to acquire LeVert, which makes it safe to assume that the organization is invested in him as a long-term project.

Another aspect of deeming LeVert an “untouchable” is continuity. Brooklyn has undergone a number of changes since Marks took over a year and a half ago. Rondae Hollis-Jefferson is currently the longest tenured Net, and the only player remaining from the Billy King regime despite entering his third year in the league. There is certainly a positive aspect of handpicking a young core and allowing them to develop together over time.

Zach Lowe often discusses team timelines on the “Lowe Post” podcast, and Brooklyn appears to be formulating a timeline of their own. RHJ, LeVert, Russell, Isaiah Whitehead, Jarrett Allen and Archie Goodwin are all between the ages of 19 and 22. This presents an interesting four to six-year timeline that in a perfect world, would involve Russell becoming an All-Star and LeVert, Allen and RHJ becoming reliable starters. Since LeVert falls in the sweet spot of that age group and presents one of the highest ceilings, it’s difficult to imagine that he would be on the move anytime soon.

In just a few short years, it will be time for Marks to begin discussing a contract extension with LeVert’s camp. Since Brooklyn selected LeVert in the first-round, his rookie scale contract allows the Nets to potentially keep him around for the next six years.

Given his limited number of games this season, it’s difficult to tell at this point how much LeVert would demand in a possible contract extension. Yet, if his development path continues to trend up, it’s very plausible that he will demand $20 million or more annually come 2020.