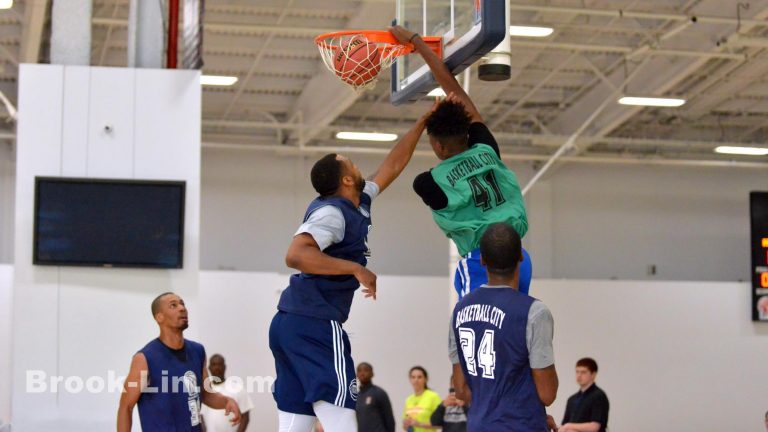 But, for players in the NBA G League, the summer is a time for them to continue to improve their game and showcase their talent in small basketball exhibitions.

“I’ve been working on my body a lot this offseason, just trying to get stronger,” said Zeke Upshaw, a 26-year-old guard who played for the Grand Rapids Drive last season. “[I’m] still just perfecting what I’m good at and my craft.” In 34 games with Grand Rapids, Upshaw averaged 6.5 points, three rebounds and 0.9 assists per game.

Gary Forbes is another player who previously played for the Drive. He cited staying healthy as a priority this summer, while also working on his shooting and ball-handling abilities. The 32-year-old small forward has been in the G League for two seasons, and he most recently played for the Long Island Nets last year. In his brief G League career, Forbes averaged seven points, 2.6 rebounds and 1.3 assists per game.

Upshaw and Forbes were among the NBA hopefuls who participated in the RBA Sports & Technology Showcase last Monday. Though the showcase was a lower-profile event due to an invite-only RSVP and few media members present, the stakes were high for these emerging players, with numerous NBA scouts in attendance.

On the subject of what he hopes scouts take away from his performance, Upshaw brought up multiple facets of his game. “I have a good IQ; I can play the game of basketball,” he said. “I’m a good team player and a versatile guy that can do a little bit of everything.”

Forbes, meanwhile, despite already being 32, felt he still had a lot to offer. At the showcase, he played in two consecutive exhibition games due to its schedule, so it wasn’t surprising that he needed to take a breather prior to being interviewed. But, he hoped scouts saw that he’s healthy and “still young, still getting up there, still getting a lot of shots up.”

With the NBA evolving to further its partnership with the G League, players in the G League have more to gain. Through the NBA’s new Collective Bargaining Agreement, beginning next season, NBA teams will be allowed to have up to two players on two-way contracts. This means that throughout the course of the season, players on two-way contracts can spend up to 45 days with their NBA team, while they spend the rest of the 125 days with their G League team.

“The league is growing,” Forbes said in reference to two-way contracts. “Hopefully a new door opens up.”

Upshaw, despite admitting that he’s not too familiar with the specifics of how two-way deals work, shared similar sentiments. “To see guys going back and forth, I think [two-way contracts] will add a lot to the game [of basketball],” he said.

The 6-foot-6 guard isn’t picky either when it comes to which NBA team he’d like to play for. “Oh man, any team,” Upshaw said with a laugh.

“Any opportunity in the NBA is a dream of mine.”