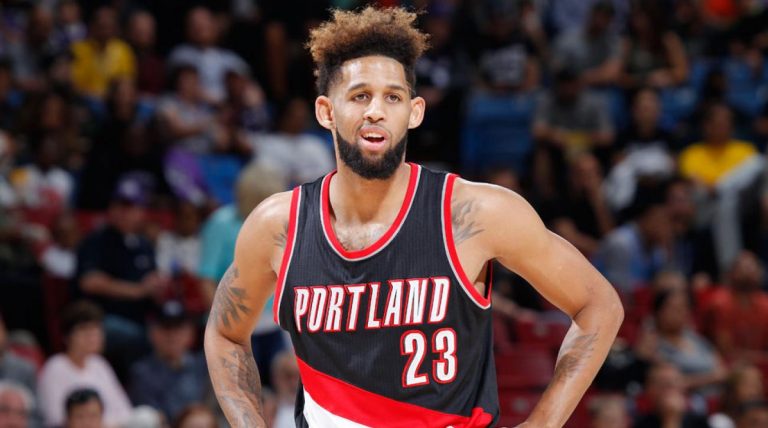 Brooklyn Gets Apple of Its Eye: Allen Crabbe Is Finally A Net

In the late July doldrums of the NBA offseason, Nets general manager Sean Marks decided to throw some candy to the media by finally reeling in his Moby Dick of Allen Crabbe. Marks displayed his fondness for Allen Crabbe’s game last July when he plopped down a hefty 4 year, a $75m offer sheet to the restricted free agent that Portland felt compelled to match. A year later, Marks convinced the Blazers to pry its grip off Crabbe in exchange for Andrew Nicholson.

So why would Marks covet so highly a sixth man who has a career high of 10.7 points per game?

Well, the first place to start with Crabbe’s role as a Net is he can light up the Barclays baskets from downtown. The 25-year-old 6’6” wing finished 2nd out of all qualified players in the NBA in three-point percentage last season with a pyromaniacal 44.4% from beyond the arc. While this mark has a great likelihood of finishing as his career high, Crabbe has a career 41.1% three-point shooting percentage to give an assurance he belongs among the elite shooters in the league.

Crabbe also can expand his shooting prowess into the midrange area and has even shown consistency making pull-ups from that range, unlike his threes that are confined to catch & shoot jump shots. If there is a specific goal on offense coach Atkinson and the rest of the coaching staff will want from Crabbe, it probably will be to expand the dynamics of Crabbe’s shooting ability.

Unlike most elite prolific shooters, Allen Crabbe did not generate more open looks for himself in Portland via off-ball movement. Often, Crabbe relied on the gravity of C.J. McCollum or Damian Lillard to create his space instead and much of his time in the half court was spent rather stationary in spots. Jeremy Lin has made his living on slashing to the rim and passing to open teammates when necessary so Crabbe should suit well next to him. New addition D’Angelo Russell also has the craft to help generate space for his teammates via subtle dribbling and passing angles.

In the Kenny Atkinson designed drive-and-kick offense that led the entire NBA in reliance on spot-up looks, Allen Crabbe could thrive and see a usage spike simply due to increased emphasis on his talents in Brooklyn. However, neither Lin nor Russell will draw quite the number of defenders Lillard and McCollum had in Portland and it will behoove Crabbe to do a bit more work in alleviating the creation responsibilities of the backcourt.

Crabbe should also get more opportunities to attack inside in Atkinson’s offense as the offense encourages attacking hard closeouts from all its players and moving the ball quickly to open teammates on the perimeter if a clear layup is not available. Crabbe has been a rather limited distributor for most of his career, both due to capability and Portland’s lack of necessity for such a skill from him, but that shouldn’t be confused as Crabbe is a selfish teammate. While likely to not generate many assist opportunities when attacking closeouts, Crabbe should be fine keeping the ball movement flowing to the more dynamic creators and also be able to take advantage of open lanes to the rim as a career 68.9% finisher at the hoop.

Defensively, Crabbe will not move the needle too positively, which may give Atkinson pause on Lin, Russell, and Crabbe simultaneously. However, Crabbe does have the height and length to credibly contest most guards and wings in the NBA. Crabbe will make his mental errors and get bullied by stronger players but not to the extent of provoking dire screams echoing through the chambers of the Barclays Center nightly. And, given Crabbe’s skill set, Atkinson could incorporate several lineup combinations mix-and-matching Crabbe, Rondae Hollis-Jefferson, Caris LeVert, DeMarre Carroll, and Spencer Dinwiddie that could be well-compensated on both the offensive and defensive ends.

All in all, the Nets now get a 25-year-old Allen Crabbe with a year less on his deal and a cheaper rate onto a Brooklyn roster desperate for a dangerous sharpshooter to fit in the team’s new shooting revolution. Having even a single player on the court who demands a defender to not help off him for even a second creates abundantly more room for Russell, LeVert, and RHJ to continue their ball handling development and Lin to perhaps have his best ever pro season.