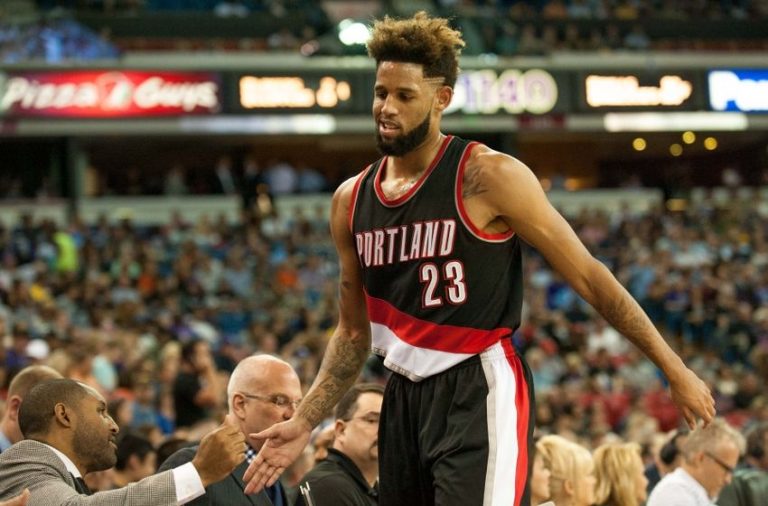 The Brooklyn Nets have traded Andrew Nicholson to the Portland Trail Blazers for Allen Crabbe, according to ESPN‘s Adrian Wojnarowski. This news comes in light of a slow week for the Nets last week, during which no offseason moves were completed.

Wojnarowski expanded on the deal in another tweet, stating the Blazers plan on waiving Nicholson by using the stretch provision tied to his contract. Nicholson joined the Nets this February through the Bojan Bogdanovic trade, but was not used by head coach Kenny Atkinson that often. In 10 games with the Nets last year, Nicholson averaged three points, 2.7 rebounds and 0.3 assists in 11.1 minutes per game.

On the other end of the trade, Crabbe finished his fourth season with the Blazers and once again served as a rotational piece in Portland’s playoff run. Through 79 regular season games, the 6-foot-6 wing posted 10.7 points, 2.9 rebounds and 1.2 assists in 28.5 minutes per game. More notably, as it pertains to the Nets, Crabbe shot a career-best 44.4 percent from behind the arc.

Brooklyn first targeted Crabbe last offseason after the guard hit the market as a restricted free agent. Nets general manager Sean Marks tossed a maximum four-year, $75 million contract at the 25-year-old, but his plans were foiled once the Blazers matched the offer sheet. However, Portland doing so certainly put the team in an unfortunate cap situation, as re-signing Crabbe accounted for nearly 14 percent of its cap space, according to Spotrac. Dropping Crabbe will put Portland only $4.4 million in the luxury tax, as opposed to $48.3 million, as reported by ESPN‘s Bobby Marks.

The Nets must see something to develop in Crabbe by taking a chance on him again this offseason, especially with such a high contract tied to his name. Crabbe is the third hefty contract Brooklyn has tacked onto its bill this summer, with Timofey Mozgov and DeMarre Carroll (also acquired through trades) coming before him. It’s unclear how Crabbe will fit into the Nets’ rotation — especially with the fact that Brooklyn has now added yet another wing — and perhaps there are only more questions than answers pertaining to who will start at small forward.

With this move, the Nets have about $3.7 million in cap space remaining, but could potentially free up more by renouncing the rights to free agent Randy Foye.