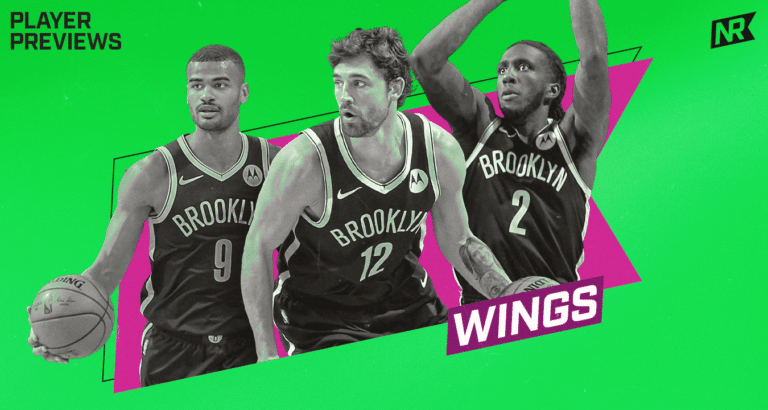 In the second installment of our “Brooklyn Nets 2020-21 Player Previews,” let’s take a gander at the wings!

We’ve done the bigs, the team’s seemingly endless collection of guards is still to come, now, in what’s likely to the shortest edition of this series — mainly due to the Brooklyn Nets’ paucity at the position — let’s look at some wings. (Not to be confused with drums or flats).

Quick disclaimer: Though some two-guards on this roster are likely to spend time at the small forward position, I only mentioned those who are going to spend the vast majority of their minutes at the three.

Given a shiny new four-year, $75 million contract this offseason, Joe Harris enters his fifth season in Brooklyn in a completely different set of circumstances — especially financially — relative to that in 2016. He’s proved to be quite the bargain thus far in his tenure with the organization. Now he has to live up to his lucrative extension.

The perfect complementary player alongside two high-usage stars, Kevin Durant and Kyrie Irving, Joe’s going to be in his element. Open looks galore, which for a marksman of his magnitude is going to be borderline comical for this coaching staff, compounded with an ever-increasing bag of tricks if teams do run him off the line will only augment this team’s dynamic.

A smart player whose malleability cannot be overstated, Harris’s unrelenting work ethic will likely pay dividends for a roster in the business of contending for a championship. He was the perfect fit for the Brooklyn Nets in 2016 as a team looking to find an identity. And he’s the perfect fit now for a team knocking on Larry O’Brien’s door. Expect Joe to be Joe. Which, at this point, should be expected.

Thus far, and by that, I quite literally mean a two-game sample size … in the preseason, it appears that Taurean Prince has slid down to his more natural position at the three. Rejoice! No longer are the days of Prince banging down low with brutes at the four. Which I’d think he’d be happy with too. I mean, we were running Prince, all 6-foot-7 and 218 pounds of him, in the frontcourt against teams like the Lakers last season. Not ideal!

One of my hot takes is that Prince is going to flourish with a reduced role this season. Which, admittedly, has cooled down due to similar sentiments shared amongst Nets faithful on Twitter.

This season — and some might say thankfully — he will not be asked to consistently be a secondary creator or three-level scorer. That green light has turned yellow. Now, all that will essentially be asked of him is to play within the Nets’ machinations on the defensive end and prove viable as a catch and shoot threat on offense — something most are confident he can do. If he plays organically within the flow of the offense and proves disruptive on the other end, a valuable rotation piece Prince can prove to be this year.

Trying to calibrate exactly what “TLC” is going to be for this team is challenging. In terms of minutes, nothing is guaranteed, especially for tail-end depth pieces on a team looking to contend. There is no need for subtlety here.

If TLC’s three-point shot from the Orlando “bubble” carries into this season, expect Nash and the Nets’ coaching staff to find minutes for him in the rotation. However, if he struggles to find his footing on a team with legitimate expectations, blows defensive coverages, or proves overzealous on that end and commits one too many fouls (which he has a history with), he’ll struggle to find consistent minutes in the rotation.

He’s going to play hard. We know that. Look, he’s no scrub … oh that was so forced but I have no shame. However, this Nets team is loaded with talent. There are only so many minutes to be allocated.

Ultimately, consistency and efficacy will need to be shown for TLC to be a roster mainstay. He’s gotten minutes in both the Nets’ preseason games — let’s see if that carries into the regular season.

Traded for by Sean Marks this offseason, sending Dzanan Musa and a 2021 second-round pick (via TOR) and a bottle of Finesse to Troy Weaver and the Detroit Pistons, Bruce Brown is entering a situation vastly different than that of the one in Motor City. His development was glaring on a team sans any expectations. Now he has to prove it on a team looking for play once regular season exhibitions come to a close.

A stifling on-ball defender and underrated playmaker, there definitely is room for someone like Brown. However, to reiterate, if two preseason games have shown anything, this Nets team is deeeeeeeeppppp. He has struggled to find minutes, even in garbage time scenarios.

However, there is good news for the ever-growing Bruce Brown stan community. The Brooklyn Nets aren’t exactly filled with good-to-great individual defenders on paper. Possessing a disruptor, someone that can run amok and frustrate opposing perimeter players has worth in and of itself. That’s where Brown can prove fruitful. Just as Nwaba did last season.