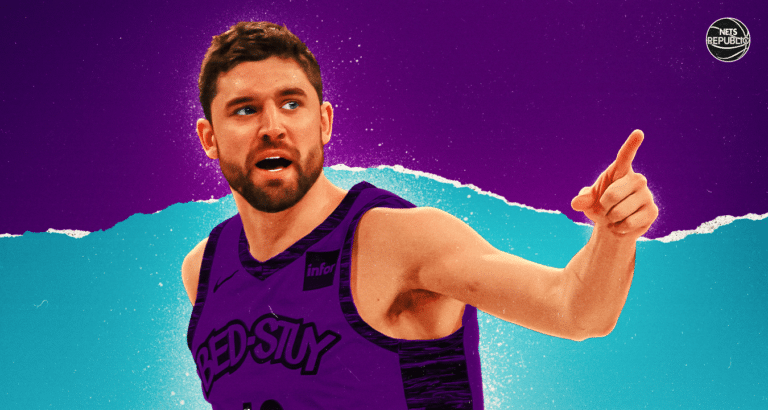 Before the Nets can address anything else this offseason, they have to “decide” how to handle the impending, unrestricted free agency of Joe Harris. That decision has likely already been made, and barring an unforeseen calamity, Harris will be back in Brooklyn next season. All sides involved are saying what you want to hear if you’re a Nets fan. “Definitely. Why wouldn’t you?” was Harris’ response when asked if he wanted to run it back with the Nets in 2021. General Manager Sean Marks has acknowledged re-signing the U of Virginia product as “priority number one,” this offseason. And according to Joey Buckets himself, rookie Head Coach Steve Nash has already told Harris he “wanted me to come back and be in Brooklyn.” So what’s there to discuss?

Predictably, money. Following the 2018 season, the Nets signed Joe Harris to a 2 year, $16 million deal. During which, he solidified himself as one of the NBA’s elite three-point shooters, while the other parts of his game, most notably attacking the basket, improved as well. All of which has led NBA people to speculate that he could “double his money” this offseason. Brooklyn should have no problems signing Harris to that type of deal, which should end up in the 2-3 year, $14-$17 million range. The Nets hold Joey’s Bird Rights, meaning that they can dip into the luxury tax to retain his services.

Luckily, Brooklyn basketball is the property of Joe Tsai. The Chinese e-commerce tycoon’s ghastly (even by owner standards) riches have insulated the Nets from the worries of COVID-induced decrease in NBA revenue. He’s conveyed on multiple occasions he is “absolutely comfortable” paying the luxury tax. General Manager Sean Marks has already acknowledged the Nets are “married to” being a tax team. No time to save pennies when you’re competing for a championship. Especially not when dealing with a hand-in-glove role player like Joe Harris.

One of the fundamental NBA laws the last decade has proved is the need to surround offensive centerpieces with three-point threats. Just ask Brooklyn’s own Kevin Durant, whose OKC teams never wore the crown in large part due to their lack of spacing come playoff time. Andre Roberson and Russell Westbrook weren’t exactly pulling defenders into orbit. It’s no secret that, whether standing still or sprinting around screens, Joe Harris is a truly lethal off-ball threat.

Additionally, the most consistent positive of Brooklyn’s 2020 season may have been Harris’ ability to create offense in the paint. A career-high 29% of his attempts came at the rim last season. You can already imagine the chaotic scrambles Kyrie and KD will send defenses into next year. Joe Harris has become a player that ensures no sloppy closeout, no turned head goes unpunished. When he’s going downhill with a defender on his hip, attacking a 2-on-1 or a 3-on-2 situation, you can rest assured Brooklyn will get a good shot. Many people, including myself, have discussed Harris’ importance to Brooklyn, and rightfully so. But the reverse is worth considering – I can’t imagine a much better situation than the 2021 Nets for Beef Jerky Joe’s talent.

These type of opportunities should come in abundance next year for Harris. We know about the three-point shooting, the way Harris will warp the floor playing alongside hall of fame offensive talent. But, Joey Buckets should see plenty of the above opportunities next year. And all the clichés are true, now, about his off-the-bounce game. He’s decisive, under control, playing within himself, etc. Harris is either rising up for three or getting all the way to the rim and finishing through or around contact – nearly 80% of Joey’s attempts last year were from beyond or within ten feet, a career high.

Joe Harris isn’t going to start many possessions initiating offense, trying to break his man down. The Nets have to artificially generate advantages for him like they do in the clips above. But with the personnel Steve Nash will have at his disposal with the ’21 Nets, curling Joe off a couple screens or finding him out of dribble penetration should be no Herculean task. Harris’ counting stats may take a hit next year, but he could have a shot at 50-40-90 shooting percentages.

There’s also the specter of Kyrie and Joe Harris forming the deadliest shooting backcourt in the NBA next year, outside of San Francisco. Over the Trump administration, Irving did not shoot below 40% on catch and shoot threes in a single season. Joe Harris’ low water mark over the same timespan was 39%. Depending on what happens to Caris LeVert and Spencer Dinwiddie in the offseason, there haven’t been too many teams in recent history to match the abundance of bLL-handling talent the Nets could have on their roster next year. We saw it some last year, but with Kyrie and Harris floating around the perimeter, any sort of penetration is that much more dangerous. This possession didn’t even feature great spacing from the Brooklyn guards, but it doesn’t matter with this type of shooting:

Additionally, many have speculated Kevin Durant’s post game could become more of a crutch for him, post-Achilles injury. If KD’s explosive movements seem to have taken a hit, and his ability to separate off the dribble follows, a steady diet of post-ups could be the remedy. His 6’11 frame and lofty release point don’t make this option sound too bad. It’s also engendered some Dirk comparisons, from an NBA community eager to see how a post-Warriors KD could look. Running more offense from the post, though, gives Brooklyn a chance to capitalize on the shooting exploits of their backcourt even further. It could mirror a revolutionary staple of Steve Kerr’s Golden State offense.

Those pre-KD Dubs often used Andrew Bogut and Draymond Green working in the post to free up the Splash Bros from three. It’s a tactic I would love to see Steve Nash add into the offense, in some capacity. Firstly, running offense through KD at the high or low post opens up a method of attack the Nets simply haven’t seen since Brook Lopez left town. But Durant has the length and vision to create passing windows most other players simply don’t have access to. Not to mention the skillset to force consistent doubling down to the block area.

Here are two examples of the offense you can run with two deadly marksmen and a plus-passer from the post. Just simple interaction between Klay and Steph is enough to open the defense up for back-cuts or open threes. Two 40+% three-point shooters roaming the perimeter at once is pushing the limits of what a defense can handle. The Warriors proved this, and it could be something Brooklyn capitalizes on in 2021. When the offense slows down and potentially revolves around KD playing 1-on-1 (never a poor option), Kyrie Irving and Joe Harris have the shooting chops to implode defenses around him.

Re-signing an elite shooter has never been a bad thing. But even qualifying Joe Harris as just that would be underestimating his value to this team. It would be a shame if the revamped 2021 Nets hinder Harris’ ball-handling opportunities, or his ceaseless off-ball movement. But there’s no reason the think a coaching staff steered by the likes of Steve Nash and Mike D’Antoni are going to struggle to fit someone of Joey Buckets’ talent into an explosive offense. Especially when Harris has proven himself to be more than merely reliable on the defensive end of the floor. His 0.91 points per possession defending in isolation situations was actually tied with noted stalwart Khris Middleton last year. This isn’t to say his defense is quite on par with that of the Bucks’ standout wing, but by no means did teams feel they could prey on Harris.

When the Nets back the brinks trucks up to Joe Harris’ house this offseason, they’ll be paying for the full package. No amount of stardom on the court should take away from the offensive abilities he’s cultivated throughout his Brooklyn tenure. And there’s no reason it should. Re-signing Joe Harris only increases Brooklyn’s chances of building a diverse portfolio around what should be a star-driven offense. A star-driven offense doesn’t have to be a monotonous one, and with the 2019 three-point champion back in the fold, it won’t be. As soon as Brooklyn takes care of the first and most important order of offseason business, the real fun begins. But until then, there’s no room to skip steps.