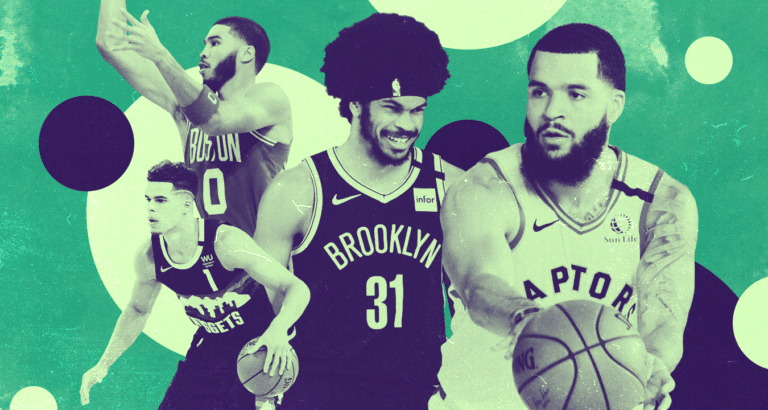 The Brooklyn Nets Missed Their Chance, and Other Takeaways From Day 3 of the NBA Playoffs

The Brooklyn Nets played really well on Wednesday afternoon vs. Toronto. They must have been inspired by watching the Houston Rockets demolish OKC on their day off, because the intensity Brooklyn brought on defense gave the Raptors fits throughout Game 2.

I mentioned it briefly on Twitter, but the Rockets defense moved with a synchronous ferocity in Game 1. It was a sight to behold. Emboldened by playing center-less ball, Houston was free to switch on every action the Thunder ran. Every inch of space OKC’s trio of slippery ball-handlers found was earned, not granted to them by way of a Steven Adams screen, and the Thunder offense devolved into plenty of standing around. Stagnant 1-on-1 possessions had all five Rockets staring at the ball, ready to spring into action if need be.

Game 2 of Brooklyn-Toronto started as a mirror image. Jacque Vaughn went with the all-switching scheme early, and stuck to it once Toronto took the bait. The Raptors offense that sliced, diced, and found open shooters to the tune of 134 points in Game 1 was suddenly in slow motion. Pascal Siakam huffed and puffed his way into contested jumpers. Before Kyle Lowry and Fred VanVleet even got into the lane, waves of upright help defenders had arrived early to the rendezvous point. And when Raptors guards swung the rock, the Nets closeouts struck the right balance of aggression and discipline.

The lion’s share of admiration, though, has to go to Jarrett Allen. He played 41 minutes of exhaustive basketball, chasing pests a foot shorter than him around the perimeter. Brooklyn’s impoverished depth chart was always going to breed big minutes for him, but he earned all of them. Yes, Allen continued to rebound tenaciously and protect the rim emphatically. But most importantly, he held his own when switched out on the perimeter. There were a couple seductive pump fakes he couldn’t resist, sure, but Jarrett Allen largely allowed his teammates to have his back; he stayed afloat in uncharted waters. If he’s a turnstile, the Raptors blow the whole scheme to pieces.

Unfortunately, as he always does, Nick Nurse figured it out. By the end of the third quarter, the Raptors had gone to a five-out offense, compromising the amount of help Brooklyn’s defenders could offer. Marc Gasol barely saw the floor in the second half, as the combination of Norman Powell and Serge Ibaka, with a sprinkling of Matt Thomas, ate all his minutes. It led to 30 fourth-quarter points from Toronto, their highest scoring period of the afternoon. Norman Powell was the greatest beneficiary, able to shoot 10-11 from inside the arc.

We can see the difference here. In the first clip, Jarrett Allen keeps Fred Vanvleet at bay. Once FVV dumps it off to Marc Gasol, Brooklyn is quick to double and force the ball back outside. Caris LeVert commits a wanton foul, but it’s an otherwise excellent bite of team defense.

With the five-out offense, as shown in the second clip, Allen has a much more uncomfortable assignment; you can see him twitching focus between the ball and Norman Powell in the corner. As Powell attacks off the catch immediately, Allen has no chance to recover (Although, the lack of help defense from the weak side isn’t great either). It’s one thing to ask a big man to guard 1-on-1, especially for someone the Fro, who uses his wingspan to help make up for subpar foot speed. It’s another to ask him to move like a guard in help, dashing from block to corner, trying to closeout under control.

The five-out offense created a cavernous environment for Powell, an excellent, instinctual athlete, to simply find and attack the open space. And while it helped to scheme Marc Gasol off the floor, Toronto’s bottomless pit of brainy defenders softened that blow. However, Game 2 still could have been Brooklyn’s. They just didn’t do enough housekeeping to ensure a victory, even while holding Toronto to just 44% from the field, and 26% on threes.

Losing the turnover battle 17 to 8 won’t beat a team like Toronto. And 34% from deep with 70% from the line aren’t horrendous marks either, but they’re just simply not good enough to overcome the existing talent gap. Lastly, the inconsistency of Caris LeVert’s outside jumper chose an awful time to rear its ugly head. Toronto defenders did a fantastic job impeding his progress to the rim, and LeVert simply didn’t have the chops to beat them from the outside. If he does better than, yikes, 5-22 from the field, Game 2 may wind up in Brooklyn’s hands.

Without Joe Harris, and in a 2-0 hole, the competitive portion of the series for Brooklyn is probably over. Expect the wizard Nick Nurse to have an even greater counter for Brooklyn’s switchy defense in Game 3. And while there’s no question the Nets will play hard from here on out, letting Game 2 slip through their hands was likely the fatal dagger to their season’s heart.

Please Try Something Else, Brett Brown

The Sixers came out firing on all cylinders vs. Boston in Game 2, taking an early 27-14 lead. Yay! They got outscored from that point on, 114-74. Bad! There’s no shortage of culprits for this quickly deteriorating Philly team. Ben Simmons’ health, front office ineptitude, the general aura of defeat and apathy the team as a whole emits; take your pick. But it would be nice for everyone to give the playoffs the ol’ college try. Especially head coach Brett Brown, whose ass must be covered in third-degree burns after eons on the hot seat.

I guess he’s numb to the pain by now. His refusal to adjust Philly’s drop pick and roll coverage allowed the Celtics to turn a competitive affair into a walk in the park by halftime. If you’ll remember, dropping against the pick and roll vs. Boston almost robbed Nets fans of our moment of the year, Caris LeVert’s late-game explosion in TD Garden. As Brooklyn was mounting that comeback, Kemba Walker nearly put the contest out of reach several times. As DeAndre Jordan sat in the paint, Kemba came off high screens and waltzed into pull-up threes. Kenny Atkinson, a true zealot of drop coverage, refused to adjust. Probably because the math shows the offense is going to go cold on pull-up jumpers eventually.

But what if it’s the playoffs, and the ball keeps going through the net? According to Brett Brown, you stay the course, regardless of Jayson Tatum and Kemba Walker dropping bombs on your head. Shaq even stopped interrupting Charles Barkley during the halftime show to let Chuck express his disgust at Philly’s overall defensive intensity, but especially that scheme. Kenny Smith provided some valuable insight on the big board too, but all you need to know is this:

That’s too much space for an NBA shooter. After the game, Joel Embiid was asked about his role as couch potato in drop coverage: “They want me to stay back… but we’ve got to make adjustments. Something’s got to change. It feels too easy.” Yikes.

Michael Porter Jr. and Bol Bol are terrifying basketball players. Because, so far, they actually look like the players their high school mixtapes promised us they were. Bol Bol is pinning shots on one end, handling the ball and pulling up for three. Michael Porter Jr. looks, at times, like he is sleepwalking into getting buckets from all three levels. And they’re doing that against NBA players, not vs. kids sleepwalking into the gym after chemistry tutoring! Scary stuff.

Michael Porter Jr. is flashing those skills in meaningful, playoff minutes. There is nobody that comes to mind other than Kevin Durant when watching a lanky seven(ish)-footer stroll into pull-up threes. That comparison is a testament to KD’s singularity, but also to Michael Porter Jr.’s growing repertoire. He loves that lefty hang dribble into a pull-up three, which is straight out of the EasyMoneySniper starter kit. Give him any airspace, and MPJ has the release point to evaporate the defender into dust. Show too hard, and he’s keeping the dribble alive, steaming into the lane. It’s what he does when he gets there that’s the next evolutionary step.

It all unfolds in the above video. In the first clip, MPJ calmly squares up against poor Georges Niang, rocks him to sleep, and hang dribbles into three points. The friendly pat on Niang’s back after putting one in his eye, just to congratulate his feeble effort is perfect, too.

In the second clip, Porter Jr. catches Joe Ingles flat-footed on the perimeter, and easily scoots right on by. Utah’s defense completes a standard rotation; the big meets Porter, the weak side wing plants himself in front of Mason Plumlee. The obvious pass here is to Monte Morris in the right corner for a wide open three. That…doesn’t happen.

Michael Porter Jr. hasn’t developed that sixth sense of anticipating where defensive help is yet. He’ll probably get there at some point; he’s only played 57 professional games after 3 NCAA ones. But that lack of awareness shows up in his stupefyingly low 0.7 assists per game. Right now he’s scoring because he’s just so damn talented. If MPJ ever becomes a true, star-level number one option, it’ll be because he develops that awareness to get others involved.

Reggie Jackson, for Better or Worse

The Clippers don’t have a floor general. Kawhi Leonard, their best offensive player, is not a creator for teammates. Paul George, with all the talent in the world, is in constant score-mode as a number two option. It’s probably the right mindset. Their best ball-handler, in the traditional sense, is Lou Williams. Lou-Will was a shoot-first, pass-second lead guard last year. He is now a shoot-first, shoot-second playmaker as the clear-cut third or fourth option in 2020. Patrick Beverley, when he returns, will do what he can to bark out orders for the offense, but isn’t going to facilitate the action. All of which is to say, the Clippers probably don’t have a single above-average passer in their lineup. Reggie Jackson included.

Signed just before the NBA’s stoppage, Reggie Jackson is now the LA’s starting point guard. It’s an interesting dynamic. When the Clippers offense is running cold and stagnant, as it was against the Mavericks on Wednesday, he can inject some life. In a three-minute span in the second quarter, Jackson helped the Clippers nearly erase a 15-point deficit by making 3 three-pointers. All three shots were of the “No, No…Yes!” variety, contested, or after little to no ball movement. Yet, all of a sudden, the Clippers had closed the gap heading into halftime.

Los Angeles faced a similar situation again in the fourth quarter, down 13. This was now make-or-break time, with only a few minutes of even average basketball separating Dallas from tying up the series at 1. I’m sure they were thrilled when Reggie Jackson, on two consecutive possessions, brought the ball up and hoisted an immediate brick from deep, and then missed another contested one off the catch with 16 seconds left on the shot clock. That kept the Dallas lead at 15, as Kawhi and Paul George combined for one touch on those possessions.

The Clippers will do this from time to time. They have all season. Without anybody setting the table consistently, their big-game hunters are left to scrounge for themselves, and the offense slows to a snails pace. Reggie Jackson, who never met a defender he thought could check him, doesn’t alleviate that equation. He merely adds to the chaos. Welcome to the Reggie Jackson experience. Positive or negative, and often both but never neither, he’s going to make an impact while he’s on the floor.