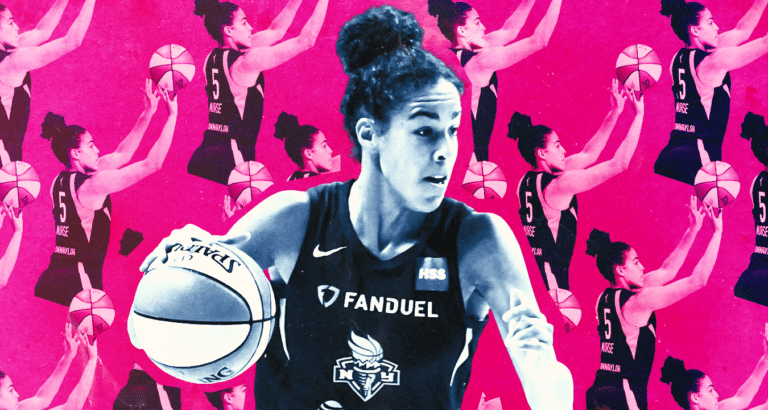 Is It Time To Talk About Kia Nurse’s Efficiency?

On Tuesday night, New York Liberty guard Kia Nurse was 6-for-12 from the floor against the Seattle Storm, scoring 21 points and shooting 50 percent from three. Despite the team result, it was a good game from Nurse.

But it was also the first time this season that Nurse had shot over 40 percent from the field, and the first time she had shot over 30 percent from three in a game. Nurse’s shot has struggled to fall all season, and of the 32 players to average at least 10 shot attempts per game, Nurse’s 22.9 percent mark from the floor is the worst by a wide margin, with Satou Sabally’s 35.8 percent coming in as the second-worst.

Her three-point efficiency numbers are also bad — 23.8 percent for the year — though not quite as bad by comparison to the other high-usage players. Take off the three players — A’ja Wilson, Alyssa Thomas, and Brittney Griner — who haven’t made one because they don’t shoot them, and of the 29 high-usage players left, Nurse is 24th in three-point field goal percentage, ahead of Tiffany Mitchell, Chelsea Gray, and a few others.

These numbers factor in Nurse’s strong game from Tuesday, which helps to underline even more how bad her numbers were coming into that game.

So, what’s going on? Why has Nurse been the league’s least-efficient high-volume player? Let’s turn to some film to try figuring it out.

Nurse was an All-Star in 2019, thanks in large part to her taking a major leap in her second WNBA season.

The former UConn product averaged 13.7 points per game on 39.3 percent shooting, hitting 35.3 percent of her 5.4 threes per game while adding 2.5 rebounds and 2.3 assist per game.

Without even getting into the advanced stats, we can see there’s a notable change in what Nurse has been able to do. Why? What’s changed?

I think the answer lies in the changes made this offseason to the Liberty. This is a very different team than the one New York put out last year, and Nurse has had to step in as the first option offensively, whereas last year she had Tina Charles in the middle to take pressure off of her.

Per Synergy, here’s a comparison of the amount of time the Liberty used different play types last year vs. this year.

The two notable things here? A big uptick in spot up attempts and a huge drop off in post ups. Taken together, those things back up the whole idea that this offense is radically different than last year’s, putting more pressure on the perimeter players to create and score. That’s what happens when you trade away a player like Tina Charles and don’t invest in a post-big to replace her: the guards have to do more.

So, what’s behind the struggles from Nurse?

Let’s start by looking at her shot chart vs. league average:

As you can see, the problems for Nurse aren’t just in one part of the court. The three-pointer isn’t falling. The midrange isn’t fall. The shots in the paint aren’t falling.

Nurse has struggled on catch-and-shoot looks when guarded and unguarded, but the guarded looks have been particularly rough, as her 12 possessions have produced 0.5 points per possession, which ranks in the sixth percentile.

As you can see on this play, the defense does a good job of sticking to Nurse, and when Amanda Zahui B sets a screen to try to open up space for Nurse, the defender just plows right through it, and Nurse fires up an off-balance shot with a player in her face. Air ball.

This year, the catch and shoot number is down to 42.4 percent, and just 10.1% of her possessions come off screens. She’s spotting up more, and it just doesn’t seem like she’s able to generate the same kind of quality shots off these plays.

I think we can probably attribute some of these struggles to things outside of Nurse’s control. She dealt with an ankle injury early in the year which threw her off, she’s having to take on an oversized portion of this offense with Sabrina Ionescu hurt, and she’s had to learn an entirely new system this year. It’s tough.

And Tuesday’s game did give us some positives. I don’t want this whole piece to be read as a hit piece on Nurse, who’s a talented player and would be in a much better spot as a second or third option.

Here, for instance, we see that Nurse is still capable of making a defense pay if they give her the space to shoot. Breanna Stewart is just inside the arc and doesn’t really attempt to challenge Nurse on this shot attempt, and Nurse is able to take the Zahui B pass and turn it into three points.

On this play, Nurse brings the ball up the floor, comes around the right side, and takes off towards the basket, slipping around a little once she’s in the paint and squeezing the layup in.

What these two plays have in common is that they came in transition. New York didn’t set up their half-court offense, which didn’t lead to intense defensive pressure on Nurse.

Nurse is scoring in the 11th percentile in the half court, but in 27 transition possessions is scoring 1.111 points per possession, which ranks in the 58th percentile, which is a huge improvement.

For Nurse to stay effective like she was against Seattle, the ball needs to be in her hands when the team is running up and down the floor. She’s not built to withstand the brunt of the defense as a first option in the half court, but she does have the mix of ball-handling, vision, and open shot making to be a strong transition player for this team.

And when the future arrives and the Liberty have Ionescu and Asia Durr and a 2021 lottery pick in the fold, Nurse will be able to play in a role in the half court that better suits her.

2020 is a learning year for New York. And maybe one thing they’ll learn is that Kia Nurse won’t be able to do it all for them. But that doesn’t mean she’s a bad offensive player — it just means that the role she’s playing this year is a little too tall a task.

So, yes, the efficiency issues are pretty apparent. They can’t be ignored. But as long as the team doesn’t try to force Nurse into the the exact same role next year that she was in this year, I don’t feel too much concern about these issues down the road, though I do believe the team should try spreading attempts in the half-court around a little more over the remainder of this season.