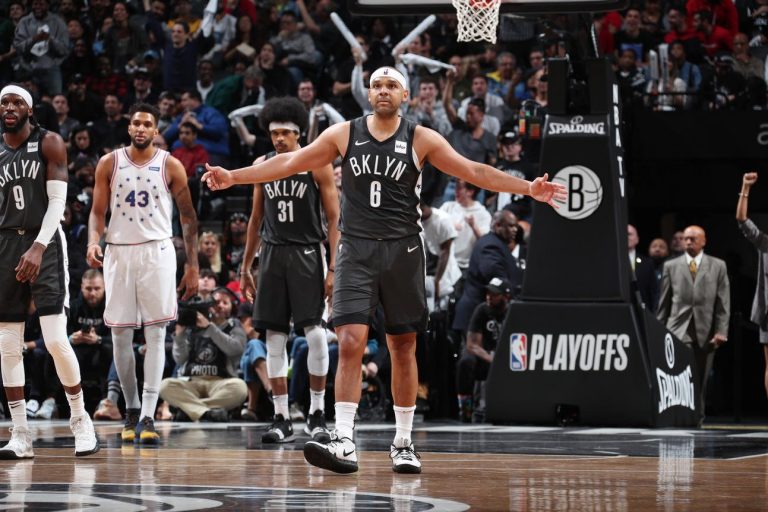 BROOKLYN, NY - APRIL 20: Jared Dudley #6 of the Brooklyn Nets reacts against the Philadelphia 76ers during Game Four of Round One of the 2019 NBA Playoffs on April 20, 2019 at Barclays Center in Brooklyn, New York. NOTE TO USER: User expressly acknowledges and agrees that, by downloading and or using this Photograph, user is consenting to the terms and conditions of the Getty Images License Agreement. Mandatory Copyright Notice: Copyright 2019 NBAE (Photo by Nathaniel S. Butler/NBAE via Getty Images)
Home
Brooklyn Nets
Gotham's Reckoning

In what may have been the best game of the NBA playoffs thus far, Brooklyn dropped Game 4 of their series with Philadelphia 112-108. The 76ers now have a 3-1 lead in the series as it heads back to Philadelphia for game five. The Nets had a 101-94 lead with 5:20 left in the fourth quarter after Caris LeVert made one of two free throws. Joel Embiid immediately responded with a solo eight point run to the 76ers the lead.

Following several lead changes, including a Mike Scott corner three to give the 76ers a 110-108 advantage, the Nets got the ball back with 18.6 seconds left and a chance to tie or take the lead. D’Angelo Russell fed the ball to Jarrett Allen rolling to the basket, but he was swarmed by three defenders and turned the ball over. It was a disappointing end to a thrilling game for the Nets. Let’s review three things I liked, three things I didn’t like, and three things to look for in Game 5 of the series.

Jared Dudley was in the midst of his ultimate revenge game in the third quarter. The Nets were +12 in the 20 minutes Dudley was on the floor, and he totaled eight points, five assists, one block, and one steal on 3-for-4 shooting (2-for-3 from three). He drilled a three and taunted his nemesis Ben Simmons. A key cog who does all the little things that tend to get overlooked was front and center in the Nets biggest game of the season.

Jared Dudley vs. EVERYBODY pic.twitter.com/FIvi0NOdOJ

The final tally after the scrum, which started with Embiid fouling Allen on a drive, was a flagrant-1 on Embiid and ejections for Dudley and Jimmy Butler for escalating the conflict. Dudley stated after the game if it came to it, he’d do the same thing all over again, and that someone needed to stand up for Allen. Dudley has become almost a cult figure this season for the Nets. His impact on the this team will not be forgotten anytime soon.

Hear from Jared Dudley after his 3rd quarter ejection in Game 4.#NBAPlayoffs pic.twitter.com/eSVpETbxrc

It’s a long season, 82 games over seven months, and recency bias sets in quickly. There were some calling for LeVert to be dropped from the Nets rotation just weeks ago. Gone was the memory of the start of the season, when he was one of the best stories in the NBA. He was the focus of glowing pieces by esteemed writers like Zach Lowe. A gruesome right foot dislocation November 12th derailed his season and led to an (almost miraculously short) absence. When he returned in February, his timing looked off. It was easy to forget he was so recently the Nets best all-around prospect. A wing who could run the offense with defensive upside unmatched by Russell or Spencer Dinwiddie. For the second straight game this series, LeVert captivated the national audience.

Blink and you miss the brilliance of this behind the back pass under the basket, which he makes look easy:

It’s the LeVert show in the first quarter for the #Nets! Slow mo look at this behind the back pass#Nets #WeGoHard pic.twitter.com/UOiuFlqcV2

After the tough loss in game three, coach Kenny Atkinson said he expected to find more playing time for LeVert. With Ed Davis unavailable, and Jared Dudley ejected in the third quarter, Atkinson responded in a big way. LeVert and Dudley were moved into the starting lineup in place of DeMarre Carroll and Rodions Kurucs. At final tally, LeVert played 42 minutes, topping his previous season high of 40 minutes, pre-injury, on October 31, 2018. Russell, Harris, and Allen also played series high minutes.

Brooklyn committed only 14 turnovers compared to 20 turnovers for Philadelphia. However, five of the Nets 14 turnovers came over the last 4:11 of the fourth quarter. That stretch coincided with a three point lead turning into a four point loss.

Joe Harris’ struggles from beyond the arc continued in game four, as he went 0-for-6. Harris is 0-for-12 from 3 in the last three games and 3-for-16 on the series (18.8%). He continued making strong cuts to the basket and competing on defense, including a finish over Embiid to give the Nets the lead with 25 seconds to go.

Harris finished +9 in plus/minus for the game in 35 minutes, after totaling -65 in 85 minutes in the first three games. The NBA’s leader in 3-point percentage (47%) needs to continue to shoot. He is a key cog in this Nets offense, but this just happens to be the worst possible time for a slump. This Nets team is built on high volume shooting from three, and the importance of Harris with their lack of other elite shooters can not be overestimated.

This season the #Nets shot 35.3% from 3, 15th in the league. Remove Joe Harris shooting volume and the rest of the team shot 33.5%, which would have ranked 28th in the league.#NBAPlayoffs #WeGoHard

Kenny Atkinson was furious at the referees after the final buzzer, as Spencer Dinwiddie guided him back towards the Nets bench. Atkinson discussed in the post-game press conference his primary issue with the non-call on Jarrett Allen at the end of the game. The NBA this season placed a focus on cutting down on arm wrap fouls. Tobias Harris wrapped up Allen when he tried to cut, causing him to slip and ruining a clear break to the basket. The delay gave the defense enough time to recover, and Allen turned the ball over in a swarm of defenders.

Allen has seemingly improved each game of the series as he has grown more comfortable. He finished game four with a 21-8-4 stat line on 7-for-11 shooting (7-for-7 from the line) with two steals. He still seems to take a beating, whether being legally pushed around in the post by Embiid, or shoved in back under the basket when he has position with no call. It does not make sense to blame outcomes on officiating. However, it was a tough way for game to end considering the way Allen has taken a beating this series.

Three Things To Look For in Game 5

Expect the boos to be loud and constant for Dudley, as he has become Public Enemy No. 1. The game ending seemingly led to more focus on the fracas than the actual results of the game.

Embiid continued to take shots at Dudley while sitting next to Jimmy Butler in the postgame press conference. Expect game five to be must see television.

The Nets were ready to embrace volatility with only one big man available. They ran out small lineups with Rondae Hollis-Jefferson (RHJ) and Dudley at center. If Ed Davis remains out, the Coach Atkinson will need rely on these lineups even more especially if Allen gets into foul trouble. Attacking the Philadelphia big men with small (non-RHJ) lineups containing five shooters has had some success thus far. These lineups could see even more time if Dudley remains on the floor in game five.

The Nets ended the game +12 in extra possessions (+6 offensive rebounds and +6 turnover differential) in the first quarter when they raced to a 33-24 lead. They finished the game +7, their first positive differential in the series. If their outside shooting continues to suffer, they will need to win this battle in game five to have any chance of sending the series back to Brooklyn.