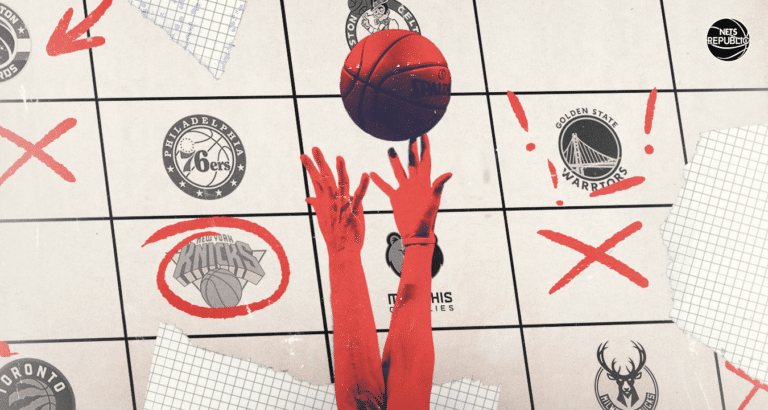 Brooklyn Nets: A Look Ahead at Some Must-See 2020 Matchups

The writers over here at Nets Republic are no different than any other fan of a sports team. We all participate in the long-standing tradition of schedule-peeking. When the NBA released its calendar for the first half of the 2021 season, up until the beginning of March, rest assured we were looking ahead and circling the games that intrigued us most.

Whether it be a crosstown rival or a cross-coast contender, some contests are simply different. And with a Brooklyn squad rich with storylines waiting to be completed, there’s no shortage of eyeball-attracting matchups. Here are the games we’re looking forward to:

The Kevin Durant era truly starts once the Brooklyn Nets kick off their 2020-2021 campaign in a few weeks; immediately, the superstar faces his former team.

While Durant makes his long-awaited debut, Stephen Curry returns after from an injury that shortened his season to just five games last year. Golden State, much like the rest of the world, found its share of surprises in 2020, as the team failed to make the playoffs after a devastating series of injuries.

It’s an immediate test for both teams with championship aspirations, and an exciting return to the hardwood for two of the NBA’s best shooters.

Modern conversations about the Brooklyn Nets can’t be had without at least one mention of either the infamous Sports Illustrated cover featuring Paul Pierce and Kevin Garnett (among others) or the infamous trades that led to their Brooklyn arrival. Christmas Day, a holiday of birth and redemption, could be the perfect time to officially turn the page and forget that perplexing chapter in Nets history.

Despite the one-sided nature at the time … Brooklyn’s Garnett/Pierce gambit failed to net (pun very much intended) a mere trip to the Conference Finals and only set the franchise back further. One could accurately call the Nets and Celtics’ collaborations a wash.

Boston has remained a consistent contender in the Eastern Conference but has struggled to get over the hump to the NBA Finals. A good portion of their success has come from the antics of Jayson Tatum and Jaylen Brown … each of whom was obtained through picks that formerly belonged to the Nets — allowing the Celtics to build a six-year playoff streak (second-best in the East behind Toronto).

Last season, the first campaign free of the LeBron James monopoly since 2002-03, showed that there’s a bit of a power vacuum in the East.

Brooklyn watched mostly from the sidelines, granted a year of consequence-free basketball with Kyrie Irving and Kevin Durant relegated to the injury report. The Miami Heat took advantage, notably topping Boston in the Conference Finals en route to the Disney-based championship.

There’s no better time for Brooklyn to solidify their status as the new managers of the conference than topping one of its most consistent contenders on the NBA’s most prominent regular season stage.

Acknowledging that my counterparts were likely to provide insight into some of the Nets’ marquee matchups, which they’ve done, eloquently I may add as well, I thought I’d mix it up a bit.

Listen, the Memphis Grizzlies and the Brooklyn Nets don’t exactly have a history together. You know, outside of that one time they donned their Vancouver throwbacks and proceeded to 40-ball the Nets at Barclays Centre in March (which as a Nets fan living in Vancouver…was the utmost form of blasphemy). It didn’t help that they also caricatured the team’s 2018-19 bench mob celebration amid a blowout in the fourth quarter—manners, I swear to you they still mean something.

On Dec. 28, the two teams will meet for the first time since that fateful encounter just days before the season was indefinitely suspended last season. It could provide quite the spectacle—aesthetically—if both teams decide to rip out their throwbacks, but I’m mainly interested in vengeance. Personal vendettas, it’s what makes the world go round.

Rest assured, no one is going to be able to watch Kevin Durant’s first season since leaving the Golden State Warriors without thinking about how he arrived in the Bay, how he ultimately emerged as a two-time NBA champion, and one of the NBA’s most polarizing athletes.

The 10-time All-Star’s decision to leave the Oklahoma City Thunder after spending nine seasons as the face of the franchise will follow him until the end of his NBA career, if not beyond. With Russell Westbrook now also in the Eastern Conference, expect to hear the same questions regarding their friendship, and see the same fireworks when they share the floor as we have all been captivated by as fans over the last four (three) seasons.

There will be no better signal to what these matchups are going to look like then when the Nets host Westbrook and the Wizards at Barclays Center on January 3rd. By that time, the NBA will be in just its third week of the 2020-2021 NBA season.

A matchup with an offensive powerhouse like Washington might provide a solid measuring stick for where the Nets stand in comparison to other title-chasing teams around the league. The Brooklyn Nets and Washington Wizards will play just twice in the first half of this season. Provided that Kevin Durant is healthy to the extent that he’s still an elite scorer and defender, and Russell Westbrook is still the electric athlete that demands an audience, it will be must-watch basketball on both occasions; if not again later on in the playoffs.

In what has become the basketball version of the Capulets and Montagues, the claim for who owns New York has become a hot button issue between the Nets and Knicks Twitter factions.

Remember when Knicks fans spent an entire year photoshopping Kevin Durant, Kyrie Irving and Zion Williamson in Knicks jerseys just for Zion to go to New Orleans and KD and Kyrie to land in Brooklyn? And then it became the whole “we never really wanted them anyway.” Pepperidge Farms remembers.

From chest-pounding over ratings and who makes the back page, to parody accounts, the Knicks-Nets rivalry is growing in a unique way even though both franchises are in different places.

For Brooklyn it’s “win now” mode. With Kevin Durant and Kyrie Irving both healthy, the championship window is here. For the Knicks they’re looking toward the future. With RJ Barrett, Mitchell Robinson and new addition Obi Toppin — New York is building for the future.

The January 13th matchup is the first time these two squads will meet this season. Last season the Nets and Knicks faced off early in the season. A game in which Kyrie had his first signature Brooklyn Nets moment, when he hit the go-ahead 3-pointer over RJ Barrett with 21.9 seconds left in the game.

It was the only game Irving played in the rivalry last season as injuries and the tragic death of Kobe Bryant kept him out of the other matchups.

No matter how you look at it this is a statement game for Brooklyn. Whether players care about who owns the city or not, a win in the first meeting of the season would set a precedent. Yes the Knicks aren’t one of the team’s Brooklyn will be competing against on their journey to bring home a title but beating “big brother” is always nice. Plus it would be poetic justice for the two guys Knicks fans photoshopped into Knicks jerseys to put up a dominating performance against them, and wearing Nets jerseys at that.

It’s no secret that sports leagues try to market certain holidays in their favor. The NFL has been part of Thanksgiving traditions for countless amounts of households across the country, and many find themselves turning on the TV to watch a primetime NBA game after opening gifts on Christmas. In recent years, the NBA has been hosting similarly star-studded matchups on Martin Luther King day, which falls on the third Monday of January.

With the additions of Kevin Durant and Kyrie Irving in the famous “Clean Sweep” during 2019 free agency period, the Brooklyn Nets are now poised to be NBA contenders. And with those newfound expectations land a plethora of primetime matchups.

Needless to say, the Milwaukee Bucks are a formidable matchup. The Bucks have finished first in the Eastern Conference in back-to-back years and possess the two-time reigning MVP Giannis Antetkounmpo.

Although they have come up short in each of their past two postseason runs, the Bucks went into “win-now” mode this offseason, parting with five future first-round picks in exchange for former Pelicans Guard Jrue Holiday, who was a heavily-rumored Nets target this offseason. The Bucks also added depth pieces such as Bryn Forbes, Torrey Craig and Bobby Portis.

Let’s not beat around the bush here, there’s one matchup everyone will be tuning in to see: Kevin Durant vs Giannis Antetkounmpo. The Slim Reaper vs The Greek Freak. Two nearly-7-foot forwards, one with freakish athleticism, the other with out-of-this-world skill.

I’d expect to see these two matched up quite a bit, although Durant will have to conserve some energy for the offensive side of the ball. Both players are essentially unguardable, but I took my best crack at breaking down a defense against Giannis here.

The Western Conference still has two Tier 1 contenders for their NBA Finals slot. The reaction to a conference champion that doesn’t claim LA, despite the many teams that improved, would be one of surprise.

Denver’s defense is not respectable enough for this to qualify as Nuggets slander; they exist amidst a collection of exciting Tier 2 rosters full of storylines and MVP candidates. Meanwhile, there’s five teams in the East that I suspect could take the crown: Brooklyn, Milwaukee, Miami, Boston, and Philly (negligible hesitation on Toronto).

Perhaps surprisingly, I think Philadelphia has a strong argument as to being the scariest threat to the Nets. Each of the Sixers star talents represent unique danger to the Nets roster. In three games vs. Brooklyn last season, Ben Simmons averaged 25/8/9 on a hilarious 76% from the floor, with 12 steals + blocks to just eight turnovers.

Forget the jumpshot for a minute, Simmons is a particularly scary matchup nightmare for Brooklyn; he is an overwhelming force against this roster on both ends, and even more so with a spaced-floor offensively. (It’s interesting to note Joel Embiid did not appear in any of the three games.)

Maybe Kevin Durant will this year, but no individual on the Nets last year had a prayer at keeping Simmons out of the paint.He and Matisse Thybulle may be the best defensive counter to KD and Kyrie in the conference. Joel Embiid needs less of a re-introduction to Brooklyn fans, after putting up 39 and 16 in their only confrontation in 2020. The Nets have had hardly any answers for him throughout his career.

By February 7th, we’ll have somewhat more of a feel for these re-tooled rosters; the Sixers added by subtraction in the offseason, but also through outside shooting. More so than Miami and Boston, and perhaps Milwaukee, this is the potential playoff opponent I want to see Brooklyn face before the All-Star Break.

But this is the season Brooklyn fans have been waiting for. Not just since they inked Kyrie Irving and Kevin Durant to max contracts two summers ago, but truly since their move to Brooklyn. Previous ownership wanted the bright lights and brand recognition of a major market franchise.

This regime, led by GM Sean Marks and owner Joe Tsai, now has it. Including games simulcast on NBA TV, over half of Brooklyn’s announced games will be on national TV. The time is now, and there’s no shortage of games to look forward to.