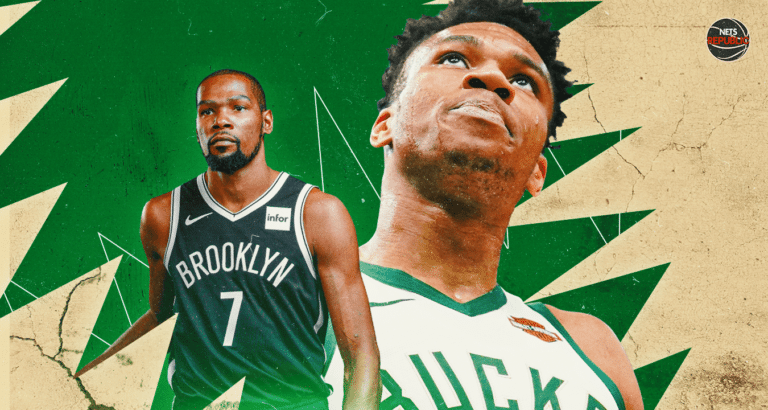 The Giannis Rules: A Nets Guide To Defending The Greek Freak

As the Brooklyn Nets 2019-2020 season gradually comes to a close, fans and the organization alike will look on to next year. It’s is still uncertain whether next will be tipping off in late December, January, February, or even as late as March. Regardless, one thing is certain for the Nets; it’s time to reap the rewards of the 2019 free agency.

That reward is 2x Finals MVP Kevin Durant, and (hopefully) a full season of Kyrie Irving. Offseason moves pending, the Nets are poised to make a deep postseason run with the intention of bringing the franchise’s first ever NBA title.

Brooklyn won’t be the sole team in the Eastern Conference with Finals aspirations, make no mistake. The Toronto Raptors have built an excellent culture and are defending their title with pride, and Boston Celtics are a formidable two-way squad led by breakout Star Jayson Tatum, and the Miami Heat surprised everyone this year on the backs of Jimmy Butler and Bam Adebayo.

Despite a lack of acclaim, it’s clear that the east runs through the first-seeded Milwaukee Bucks and their (soon-to-be) two-time MVP Giannis Antetoukounmpo. The Bucks posted all-time great defensive numbers this past year, holding teams to 102.9 points per 100 possessions and steamrolled opposing defenses with a greek-powered engine.

Giannis doesn’t have a signature stepback, fade away, or hook shot. Instead, the reigning MVP opts for a trademark maneuver that breaks the spirit of any opponent as he uses his god-given length and leaping ability to stride through the paint and deliver a thunderous finish above the rim. He gives the defense fits with his ability to contort his body to finish in a diverse manner of ways.

In order for the Nets to advance in next year’s playoffs, they’ll be tasked with defending Giannis. Luckily, they can look to this year’s playoffs as a guide. The Orlando Magic handily beat the Bucks in an unforeseen Game 1 upset. Let’s take a look at what Orlando did to stop Giannis — even if only for a game — and how the Nets can replicate their tactics.

A staple to contain players like Giannis who are dominant attacking the basket is to employ a defensive strategy known as “building a wall”. In other words, a “wall” is when two defenders one pass away focus on the ballhandler instead of their defensive assignments. The goal is that an increased focus on the ball handler will take away a potential drive to the rim.

In the clip above, Antetokounmpo’s primary defender is Gary Clark. As he winds up his left-to-right dribble and gets ahead of steam towards the rim, Guard DJ Augustin is already there, helping one pass away. Evan Fournier completely leaves his man open on the perimeter, and Markelle Fultz’s attention is completely on the MVP.

All these extra defenders clogs up a driving lane and forces Giannis to travel, turning the ball over.

Ever since Mike Budenholzer took over as head coach for Milwaukee, the offensive game plan has been simple enough: surround a great offensive player driving towards the basket with knockdown shooters. Sounds simple, does it not? Well, easier said than done. The Milwaukee Bucks shoots the fourth most three-points in the league, according to Cleaning The Glass, but convert on only 36% of attempts, which ranks 20th.

This Bucks roster is quietly full of below-average shooters. Five of the six players playing the most minutes per game for the Bucks all shoot below average from deep, with some player’s percentages dropping as low as 31%, according to Cleaning The Glass.

In the modern NBA, rules are bent towards offenses. A defense can only hope to contain an offense and limit certain parts. The Nets — and every other team in the league — will have to sacrifice some open perimeter shots to contain the Greek Freak. Luckily, the Bucks roster is full of players who can be left open to help onto Giannis.

How Does This Apply To The Nets?

With an eventual matchup with Milwaukee in mind, how should Brooklyn build their contending roster to oppose the Bucks? Which players currently on the roster can prove useful in a potential series between the two powerhouses? Which players need to go?

First, let’s look at the wing positions. Milwaukee’s two best players –Antetokounmpo and Khris Middleton are both forwards, so Brooklyn will need size at that position. Luckily for the Nets, they have a 7-foot Forward off of the injured list to begin next season. However, I wouldn’t expect Kevin Durant to take the Giannis assignment every time down the floor considering his immense workload offensively.

In recent years, the Nets have gone small at both forward positions, sliding players down a spot in lineups. Joe Harris has become an small forward, Taurean Prince a power forward, and Timothe Luwawu-Cabbarot has played both SF and PF after being played at shooting guard for many years.

One option for Brooklyn would be to retain Wilson Chandler, who is a body at power forward. I don’t think Taurean Prince has the defensive IQ to handle a complex defensive scheme to defend the Bucks, but Joe Harris would be able smartly contribute to building “the wall”.

As for offseason targets, the Nets won’t have cap space at their disposal becaus eof their major signings last summer, but have a war room full of trade assets and the taxpayer’s MLE. Some defensive wings I would target include Maurice Harkless, Aaron Gordon, Paul Millsap and Jerami Grant.