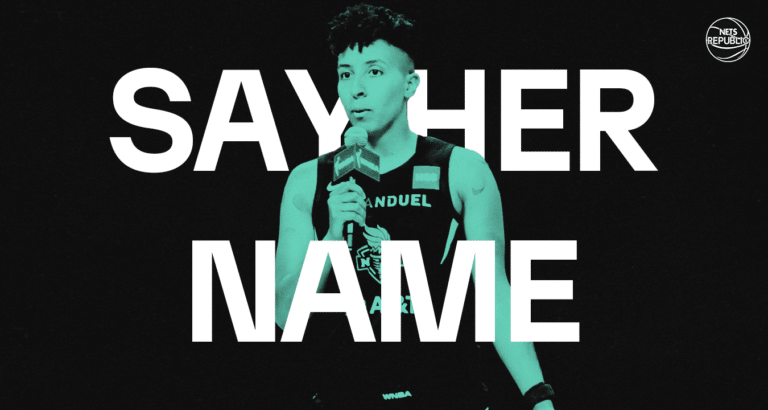 “Our Power is in our Strength, in our Collective Voices”: The New York Liberty Reaffirm “Why We Say Her Name,” and the WNBA Continues to Combat Social Injustice

On Wednesday night, Layshia Clarendon stood before a ring of their WNBA sisters, phone aglow in the darkness. The last six hours had seen a flurry of postponements across sports, starting first with a strike by the NBA’s Milwaukee Bucks before spreading to the other NBA playoff contests. From there, the WNBA postponed its games, as did several teams across the MLB and MLS. The Baltimore Ravens put out a statement detailing their plans for action. After a strong letter of solidarity from tennis star, Naomi Osaka, who said she would withdraw from the currently ongoing Western and Southern Open, the tournament announced it would delay all matches.

Inside the Bradenton bubble, once the day’s media-heavy events had tapered off, the entirety of the league gathered together for a candlelight vigil. Clarendon, flanked by silhouettes united in their actions and rendered indistinguishable by twilight, recited Maya Angelou’s poem, “Still I Rise.”

You may write me down in history

With your bitter, twisted lies,

You may trod me in the very dirt

This was a continuation of the solidarity seen throughout the season dedicated to Breonna Taylor and the “Say Her Name” social justice campaign, which has brought “awareness to the often-invisible names and stories of Black women and girls who have been victimized by racist police violence.”

This cycle of violence is a cycle of trauma, of Black people killed in the streets, or in their beds, or in their cars, of a stream of hashtags that channel tragedy into recurring reminders of the systemic racism deeply forged into America’s foundation. Athletes across the country have used, and continue to use, their platform to fight back.

Just hours earlier, Clarendon had participated in a panel assembled by the New York Liberty as a part of its fourth annual Unity Day. This year’s event, “Stay Loud: Why We Say Her Name,” highlighted the advocacy work of several women. Brittany Packnett Cunningham (activist, educator, and writer) moderated the discussion, deftly steering the conversation through topics including police brutality, the marginalization of Black women and non-binary people, and initiatives that center Black women. Alongside Clarendon (a self-described “walking intersectionality model”), Sharon Cooper (activist and H.R. professional) and Nakisha Lewis (co-convener of Power Rising) rounded out the panel.

In order to have conversations like this, you first need to prioritize conversations such as this Unity Day event organized by the New York Liberty. For rookies like Jocelyn Willoughby, this level of activism is new territory. “It’s been very humbling to see this league—and this organization in particular—put their efforts [into this event] and use this platform,” Willoughby told assembled media on Tuesday. “To be part of it has been amazing… it’s been educational.”

These women and this league have been at the forefront of the movement for years. “What is powerful about sports activism is you’re taking the privilege, the access you have and acting as coconspirators,” Packnett Cunningham said. “[The WNBA is saying], ‘We have the platform, we have the privilege, we have to spend it.’”

The W separates itself from other professional sports leagues in its inclusive messaging. The league is 80 percent Black, and a large number of its players identify as LGBTQ+. At one of the first Liberty press conferences this season, Erica Ayala asked Clarendon about their pronoun preferences. To paraphrase, they said, “She/her or they/them. He/him, too, as long as you’re not trying to misgender me.”

At Wednesday’s panel, she spoke about identity and discrimination. “We know what it feels like to live on the margins even within the sports community. We know what it’s like to fight the sexism and racism,” Clarendon said. “Fighting for Breonna Taylor is fighting for myself, fighting for my sisters. It was a no-brainer, and we knew there was a moment in sports where there were no sports happening. Our power is in our strength, in our collective voices. We were the people who needed to be centered in this moment, because Black women in sports are the leaders in this space.”

The timing of the WNBA’s return to play couldn’t have been better. The league started up a week before the NBA’s restart, boosted to national coverage to fill the sports void that had existed since the pandemic shut everything down in March. Ahead of the season, Las Vegas Aces forward Angel McCoughtry started a petition to add Breonna Taylor’s name to the backs of jerseys. The movement gained momentum in both the W, which adopted the suggestion, and the league’s male counterpart, where players were allowed to select from a list of preapproved social justice messages. Both courts bear the words Black Lives Matter, which should be an apolitical statement of fact. It’s sometimes hard to recognize progress from the trenches, especially in the wake of yet another brutal act of police violence that left Jacob Blake paralyzed after a police officer shot him seven times. Four years ago this week, Colin Kaepernick knelt for the first time. With few exceptions, he took to a knee alone.

For Lewis, creating change means putting the active in activism. “We don’t just win games by playing defense,” Lewis said. “We know our goal. We can defend it, but if you don’t score, you don’t win. For us as a movement, for Black lives, for liberation—the women, the girls, the femmes, the trans people—we cannot win simply by trying to defend our lives day by day. Winning is whole liberation for people determined on their terms. We don’t win unless we have a strategic offensive agenda…Activism is nothing if it is not connected to policy.”

Cooper, whose sister Sandra Bland died in police custody in 2015, has suffered the horrors firsthand that many of us cannot even fathom. For Cooper, each instance of injustice is cumulative. “I intentionally make the decision every day to not be selective in my outrage, but to be collective.”

Each of these role models ended on a note of positivity, encouraged by the swell of support nationwide. Both Clarendon and Cooper pushed people towards understanding, towards humanizing people whose experiences are unlike their own. “Seek out perspectives that are different than yours,” Clarendon said, emphasizing the power of reading. “There’s so much to learn by reading a story about someone else.

Cooper advocated for people to deepen their understanding of these Black victims, to move past the media-slanted headlines towards real substance. “Remember her/she/them in the fullness for who they were,” Cooper urged, “instead of a snippet or portrayal of what the media wants you to believe.”

For Lewis, the message: Get out there and vote. “When I vote as a first generation American,” she said, “I vote for everyone in my family who is unable to do so, but still lives under these laws.”

“Stay loud, keep saying her name, and go get free,” Packnett Cunningham said before signing off. The goal is “to be more free tomorrow than we are today.”

Within hours of the panel, the WNBA players scheduled to play that night had decided collectively not to play that slate of games. The lasting image will be the players of the Washington Mystics, wearing warmups that spelled out Jacob Blake’s name on the front. On the back, each player had drawn a constellation of seven small circles, seven bullet holes.

On Thursday afternoon, WNBPA president Nneka Ogwumike read a statement from its athletes. “It is important to note that this is not a strike,” Ogwumike said. “This is not a boycott. This is affirmatively a day of reflection, a day of informed action and mobilization.”

“The vigil itself was extremely emotional,” Liberty Head Coach Walt Hopkins told reporters ahead of the team’s return to play. “What Layshia said, both in her initial address and in reading her poem — the way she read it, it was beautiful. She was so genuine, she brought that level of authenticity… it helped both uplift and address the gravity of where we are.”

That night, Ogwumike had addressed the players and coaches around her. “It’s important that we’re all gathered here today,” she said. “Outside of playing basketball, but also in finding our voices.”

Leaving behind nights of terror and fear

Into a daybreak that’s wondrously clear

Bringing the gifts that my ancestors gave,

I am the dream and the hope of the slave.