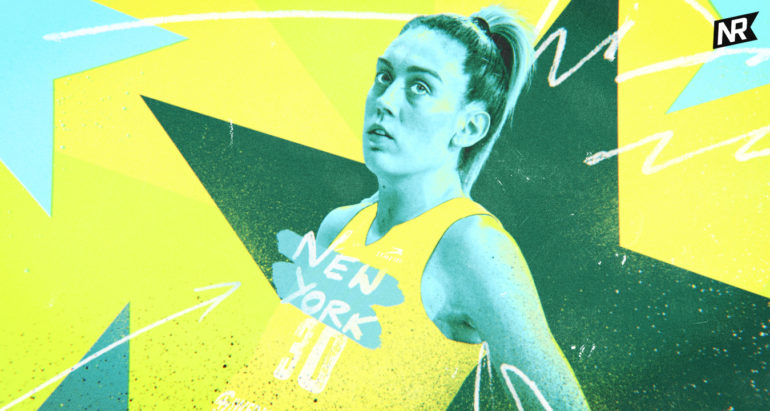 Unrestricted free agent Breanna Stewart is testing the free agency waters. Reports are that Stewart met with Liberty owners Joe and Clara Wu Tsai, new head coach Sandy Brondello and general manager Jonathan Kolb in Los Angeles over the weekend. If the 2018 MVP were to head to New York, Brooklyn could house the the next WNBA dynasty.

Does Stewart fit under the salary cap?

The Seattle Storm did not choose to core Stewart, but instead used the designation on guard Jewell Loyd, leaving Stewart free to negotiate with any teams during this period. Regarded as one of the top players in the WNBA, Stewart is positioned to secure a max deal, worth $197,267. The Liberty are one of the few teams in the league with the available salary cap room to sign Stewart to such a contract. It’s also possible for Stewart to earn more money if she remains in Seattle; there, she’s eligible for the supermax, worth $228,094. Any free agency acquisition could impact whether the Liberty can re-sign Rebecca Allen, and there’s also interest in bringing over Marine Johannès, who turned heads during her rookie stint in 2019 with her flashy play.

Free agents often test the waters, especially a top talent like Stewart. It’s not unheard of for players to visit or meet with other teams just to experience what other teams can offer. Adding Stewart to a relatively young Liberty squad would thrust them immediately into the spotlight as title contenders. Last offseason, New York added Natasha Howard and Sami Whitcomb from Seattle and brought in 2020 Most Improved Player Betnijah Laney from Atlanta. Adding Stewart to a starting lineup boasting those three and Sabrina Ionescu, and suddenly opponents are having nightmares about five scoring threats.

A clear weakness last season was New York’s frontcourt. A late start and an MCL injury limited Howard to just 13 games, while Kiah Stokes only made it halfway through the season before losing her roster spot to Reshanda Gray. Sophomore Kylee Shook saw improvements in year two, but saw her playing time dwindle towards the end of the year. The 2021 Rookie of the Year Michaela Onyenwere also fell off during the team’s late-season freefall in the standings. Putting Onyenwere into a sixth woman role would enhance the Liberty’s rotation off the bench. Drafting a post with their fifth overall pick would further deepen their second unit. The return of former second-overall pick Asia Durr is more potential depth, depending on what direction Brondello wants to go in forming this roster. The Liberty have been silent on Durr’s status, even though she is under contract (non-guaranteed) with them for 2022.

+If Allen or Johannès’ contracts are lower and they keep Richards over Jones, there’s a chance New York could bring back Reshanda Gray on a veteran minimum contract ($72,141) over Kyle Shook.

The possibility of Stewart wanting the supermax would complicate things for New York. Only the Storm, her previous team, can offer it to her. If she wants that type of money, the Liberty would be forced to trade pieces for the former MVP. Whether that makes the Liberty title contenders would depend on who’s being traded away. In all likelihood, a top player like Howard might be forced back to Seattle. The Liberty could also be asked to add in their current first round pick, likely their 2023 first round pick and two of their younger prospects (Durr? Willoughby? Onyenwere?).

Stewart at the supermax could force the Liberty to run with only 11 players for the season. Howard’s big contract going to Seattle would free up space, but then the Liberty run the risk of not being able to pay Rebecca Allen and Marine Johannes what they want. Plus the fact that Natasha Howard signed a four-year contract with New York last season could potentially alter things as well. Howard may not be willing to go back to Seattle and New York might have to get a third team involved, depending on where Howard would prefer to play. The supermax trade appears to be an extreme longshot of happening. In general, Stewart leaving Seattle appears to be a stretch, but the WNBA has seen some crazy offseason trades.

Title contenders or just a pipedream?

An All-Star-studded starting lineup, a healthy Asia Durr and Jocelyn Willoughby, the potential return of Marine Johannès, the fifth overall pick in a deep draft class. All wishful thinking, unless Stewart chooses to turn down the supermax contract that the Storm could offer her.

Would Stewart favor signing with New York to try and win more championships? There is the foreshadowing that Seattle could end up in rebuilding mode with Stewart at the center of it. 2022 is believed to be Sue Bird’s final year. Along with the potential of Jewell Loyd wanting to go back home to Chicago, Stewart could be left in Seattle with some young, fresh pieces to build around. A possible third championship with Seattle wouldn’t seem likely in the near future without Bird and Loyd in the Emerald City. A future in New York with Ionescu, Howard, Laney, and several young pieces could be enough to lure Stewart over to Brooklyn to win several titles.

And finally the Liberty’s first championship.