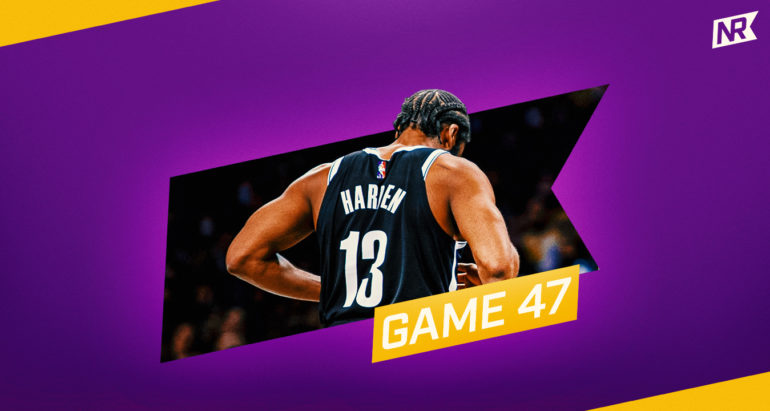 The Brooklyn Nets entered Tuesday night’s game with a giant task in front of them. Fresh off a disappointing outing against the Minnesota Timberwolves, the Nets sans-Kyrie were back at The Clays to welcome LeBron James, Russell Westbrook, and the Lakers. They’d also welcome Anthony Davis who made his return to the lineup after being out since suffering a sprained MCL in his left knee on December 17.

Davis made his presence felt early as LeBron found him for an alley-oop slam for the first points of the game. Along with his six first-quarter points, Davis collected three blocks as well. His hot start would have been the focal point if not for the offensive showcase James Harden was putting on. The Beard had the contingent of Nets fans in the arena buzzing as he racked up 15 points in the quarter. It looked like a much different Harden than what we saw on Sunday.

As expected, the Nets offense stalled out in the second quarter with Harden on the bench. Without a true ballhandler and facilitator, the Nets’ offense became clunky. The thought would be that Brooklyn could run their offense through LaMarcus Aldridge in the post however that wouldn’t be the case for whatever reason. It also didn’t help that the Lakers’ offense started to get it going spurred on by the three-point shooting of Malik Monk.

The Nets would go down by as many as 14 in the second before Harden returned. And to nobody’s surprise, the offense was rejuvenated. The only problem is that Los Angeles had finally found its groove offensively and would take a nine-point lead into halftime. Although the Nets out-rebounded the Lakers by 12 (30–18) the difference in the half was three-point shooting. Brooklyn shot an abhorrent 2-for-14 from deep compared to the Lakers’ 7-for-19 shooting. Los Angeles was also cleaning up in terms of fastbreak points, holding a 20–9 edge over Brooklyn in that category.

The second half started pretty much how the first half ended, with the Nets scratching and clawing to hang around. The scrappy play from the Nets was good enough to cut the lead to two, however, the Lakers would respond with an 8–0 run to push the lead back up to double digits. Again, Malik Monk’s three-point shooting prowess was on display as he’d finish the game with six triples. Brooklyn’s offense simply could not keep up as Los Angeles ended the third quarter on a 21-9 run.

Although it was a tough night for the Nets, they did also have a multitude of opportunities. The Lakers started the fourth quarter missing their first eight field-goal attempts leaving the door as wide open as possible for the Nets to get back in the game. Alas, with James Harden on the bench to start the final period the Nets had nobody to help burden the load offensively.

Like a shark smelling blood in the water, LeBron James started attacking like the apex predator that he is on the basketball court. With the Nets still hanging around LeBron would blow the game open with consecutive steals resulting in two thunderous breakaway dunks which threw the large contingent of Lakers fans in attendance into a frenzy. Turnovers would plague the Nets down the stretch and the Lakers took advantage, coasting to a 106–96 win.

Perhaps Steve Nash could have staggered the minutes of Harden and Aldridge more throughout the game to avoid some of the offensive road bumps. With Anthony Davis on a minutes restriction, there were plenty of opportunities to feed LaMarcus either in the low post or work the offense through him in the high post. It was also a puzzling DNP for Blake Griffin as well. Obviously, Blake has had his struggles this season but as of late he has been putting in some decent efforts. Blake most certainly could have helped in battling with AD and LeBron on the defensive end.

There weren’t too many positives from this night so the only thing worth talking about was the outing that James Harden had. As mentioned earlier in the recap, Harden was going off from the opening tip. He was aggressive throughout the night particularly to start the game. He attacked the paint and was rewarded with three and-one opportunities. To say Harden was the engine for the Nets is an understatement. James scored or assisted on nine of Brooklyn’s first 10 field goals. By the end of the first, he had a stat line of 16 points, five rebounds, and three assists.

Brooklyn struggled mightily to generate offense whenever Harden would go to the bench for rest. The strain of carrying an offense is hard enough but truly magnified when going against a team with the star power the Lakers possess.

Harden’s attacking mentality continued into the second half as he continuously got downhill. The frustration levels seemed to rise a bit as the half progressed due to a lack of foul calls. But Harden did all he could to keep the Nets locked in and fought to the very end until the Lakers busted the game open.

Without raining too much on the Harden parade, nights like these continue to leave not only myself but other Nets fans wondering why efforts such as the one put forth in this game can’t happen on a more consistent basis. It’s almost as if Harden picks and chooses when he wants to showcase that he’s still the MVP-caliber player the Nets traded for. At this point, the excuses of “playing back into shape” or “the hamstring” can be thrown out the window. With Kevin Durant and Joe Harris sidelined until after the All-Star break, it’s imperative the Nets get MVP Harden at least for home games when Kyrie doesn’t play.

Yes, the lineups and rotations are still baffling so not all the blame can be shifted to just him playing better. However, sometimes superstars just have to put on the Superman cape and save the day or at least hold out until reinforcements arrive.