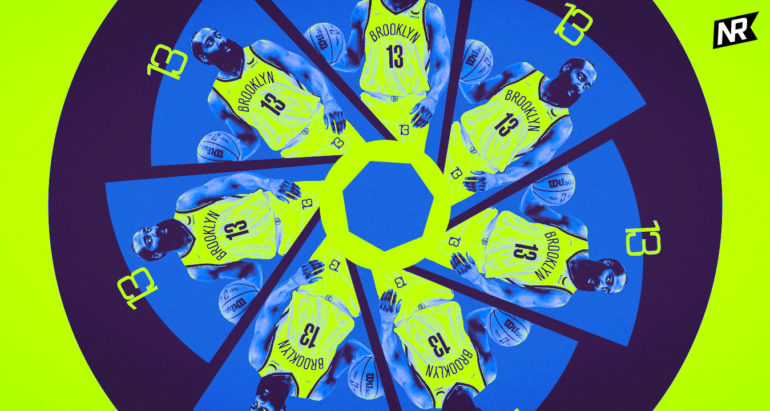 In August, Kevin Durant signed a four year extension with the Brooklyn Nets. General Manger Sean Marks said he expected to have the Nets’ other superstars James Harden and Kyrie Irving “signed, sealed, and delivered” by the time training camp started. Nets fans immediately started looking forward to seeing the Big Three in black and white through 2026.

Halfway through the season, such a possibility has never seemed further away.

Kyrie Irving cannot play in home games as long as he remains unvaccinated, and his contract situation is about as uncertain as it gets.

This week, a report from The Athletic‘s Shams Charania said that the Philadelphia 76ers were pursuing a trade for Harden this offseason. Soon after, Bleacher Report‘s Jake Fischer said that Harden “would welcome new scenery next season.”

There are infinite possibilities on how to see this news and why it’s all happening now. Here are seven ways for Nets fans to view all of this.

The Skeptic View: Is Any of This Even Worth Paying Attention To?

This view mainly addresses the first article, from Charania. The article’s main point is that the 76ers would like to make a trade for James Harden—which, I mean, who wouldn’t! I’m sure there’s 29 NBA teams that would like to have Harden on their team. If given the opportunity, would I add Harden to my George Washington Colonials basketball team? It’s a no brainer. So, it’s fair to question if Charania’s report really means all that much.

Fischer’s article is more explicit with Harden’s frustrations. But as the old saying goes, “winning cures all”. So you could again bring the question of if frustrations with the weather and Steve Nash are really enough for Harden to leave if the Nets continue to succeed.

The Trade Deadline Anticipator View: This is Posturing from Harden for the Nets to Go All All-In

One could view the Harden news as The Beard’s attempt to push the Nets even more all in (did we think such a thing was even possible?).

The team has two traded player exceptions that could be used. Owner Joe Tsai is unlikely to use them due to the costs associated with it, given the team’s already outrageous luxury tax bill. But given Harden and Irving’s uncertain contract situations going forward, could Tsai change his tune and do what is needed to give his team a championship this year?

Brooklyn could also move players with real value that they wanted to keep before due to the new pressure from Harden. The rookies or, dare I say it, Joe Harris (whose ankle injury rehab has taken longer than expected) may find themselves on different teams come late February. While Kessler Edwards, Day’ron Sharpe, and Cam Thomas have come to play legitimate roles, it’s not inconceivable that another team could value one of them in a trade for a piece that moves the Nets closer to a championship.

Harris is Brooklyn’s only mid-level salary, and is their only way to match salary in many trades. If his ankle injury keeps him through the playoffs, it’s not inconceivable that Brooklyn flips him for another piece to win a championship this year—the headlines circling Harden could make the need to go all all-in more pressing.

Here’s a fun viewpoint: what New Yorker doesn’t hate the cold? Or complain about taxes? Or hell, even have some problems with their boss and co-workers? And who hasn’t fantasized about moving somewhere warmer and cheaper?

The Frustrated Nets Fan View: Blame it on Steve Nash

Fischer’s report mentions that part of Harden’s frustration with the team has come from head coach Steve Nash’s lack of consistency with the starting lineups. Either Fischer or Harden must be reading Nets Twitter, as basically any Nets fan would tell you the same thing.

I was a supporter of Nash’s decision to experiment with lineups earlier in the season, but we’re now over 45 games in. We know that Jevon Carter-James Johnson-Bruce Brown lineups don’t work, and yet they’re still thrown onto the floor. Harden’s frustration with these rotations is understandable considering he often has to carry the scoring burden with these groups and can’t form a clear chemistry with the lack of a consistent closing lineup.

Is he trying to put pressure on the team to fire Steve Nash? Doubtful. On Nash to start being consistent? Far more likely.

This one doesn’t need much explanation. When a fan of really any sports team sees that a favorite player of theirs might be leaving, it’s easy to declare that the sky is falling—when the Big Three’s time together in Brooklyn has been marred by missed opportunities, Nets fans don’t want another one.

The “Back in the Glory Days” View: It’s All a Plot to Move the Nets Back to New Jersey!

It probably won’t help the tax situation, but it might be marginally warmer! Plus, Kyrie could play! Harden could just be a huge early 2000s hoops fan that wants the Nets back in Jersey!

Okay, maybe this one isn’t quite as realistic as the others.

The Practical View: He’s Rightfully Frustrated, But There Isn’t a Better Situation for Him

All of Harden’s frustrations are understandable. Playing with Kyrie Irving part-time and inconsistent lineups is hard. New York is cold and expensive.

But I challenge you to find a better situation in the NBA than what he has in Brooklyn.

Harden—and the Nets’ other superstars—clearly have a huge voice in the organization. New York provides great business opportunities. He gets to play alongside some of the all time greats in Kevin Durant and Kyrie Irving.

What does, say, Philadelphia offer over Brooklyn. He may be close with Sixers GM Daryl Morey, but that’s really it. If Harden’s worried about the inconsistencies of the Nets lineups, the 76ers are the only team to have more different starting lineups than Brooklyn this season. If he’s worried about his co-superstar’s health, Philadelphia star Joel Embiid is even more injury prone.

Brooklyn offers Harden his best chance to win a championship and play how he wants to. He may have frustrations, and there’s tons of ways to view all of this, but it remains hard to see Harden leaving Brooklyn.

Even if it is cold.