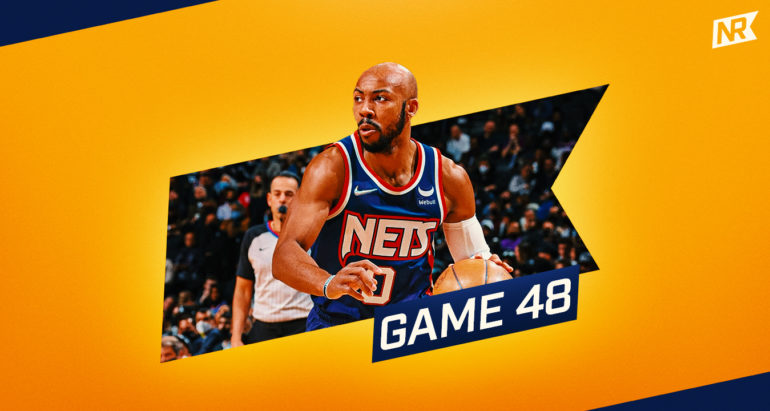 For the first time this season, the Brooklyn Nets took on Nikola Jokic and the Denver Nuggets on Wednesday night. The Nets were coming off a tough loss against the Los Angeles Lakers the night before, and had hopes of breaking their two game losing streak.

It would not be an easy task, especially considering the team was without stars Kyrie Irving and Kevin Durant; plus James Harden was ruled out with less than an hour to go before tip off.

To no one’s surprise, Brooklyn struggled mightily to find offense early in the game. Denver was stifling on defense, forcing the Nets to take low percentage shots, while rebounding the ball efficiently. Within a few minutes, the Nuggets held a 15–4 lead, and Steve Nash took a timeout.

After the break, Brooklyn was able to find a bit of a rhythm. The ball movement improved, and a layup by Kessler Edwards pulled the Nets within four. That positive momentum continued throughout the next several minutes, and Brooklyn tied the game at 22 a piece.

While Brooklyn was severely undermanned, they went into the second period trailing by only one point, 29–28. As the quarter got underway, the Nets were competitive on both ends of the floor, preventing the Nuggets from pulling away. Cam Thomas proved to be a key spark off the bench, knocking down back-to-back threes, which gave Brooklyn a 48–46 lead midway through the period.

LaMarcus Aldridge also made some major contributions. A string of three point opportunities for the veteran resulted in the Nets taking a double digit lead into halftime, 65–54. Kessler Edwards and DeAndre Bembry were fantastic down the stretch of the half, playing excellent defense and keeping Jokic from making much of an impact on the glass.

In the third quarter, however, the reigning MVP started to find a groove, effortlessly knocking down shots and creating plays for his teammates. In less than four minutes, the Nuggets were down only three, forcing Nash to call a timeout. As the period progressed, Brooklyn’s lack of energy caused their lead to fold, and Denver went up 81–79.

Towards the end of the quarter, Denver went on an extended run, taking a 92–84 lead as Brooklyn had no answers for Jokic and company. Austin Rivers was unstoppable during the final few minutes, shooting the lights out from beyond the arc. A deep three pointer from Thomas kept it a five point affair going into the fourth, with the Nuggets on top 96–91.

During the fourth quarter, multiple Nets players hit timely shots, but their inability to get stops at the other end allowed Denver to maintain a lead.

Patty Mills brought some much needed energy to Brooklyn’s offense late in the fourth, hitting back to back three pointers to pull the Nets back within five. Despite their best efforts, some late breakdowns on the offensive side of things kept Brooklyn from overcoming that deficit. Denver held on to win 124–118, as Brooklyn lost their third game in a row.

Next Man Up Mentality

Even though Wednesday night’s outcome was not ideal, this Nets squad fought incredibly hard. Considering the team was without the big three, Nic Claxton, Day’Ron Sharpe, and Joe Harris, to only lose by six should not dishearten the players moving forward. Sure, a win would have been nice but with the odds stacked heavily against them, Brooklyn still almost found a way to come out victorious.

This was due to the next man up mentality that has been a staple of Brooklyn’s season so far. Every player that saw minutes gave it their all on the court, which allowed the Nets to have an opportunity for an upset. Thomas showed that he can score at a high level, scoring a career high 25 points in just 26 minutes.

Patty Mills contributed with 21 points of his own, DeAndre Bembry scored 14, and LaMarcus Aldridge still put up 18 despite struggling late. Even Jevon Carter notched a season high 13 points, some of which helped Brooklyn maintain a lead during important stretches.

Ultimately, the team needs to capitalize on opportunities down the stretch, which is something they failed to do against Denver. Aldridge missed a rare pair of free throws, Johnson and Bembry both missed open layups, and Mills left a wide open three short on the rim during the final minutes.

As the team’s health improves, we should expect to see Brooklyn regain their confidence, especially if the role players continue to perform at a high level. When Durant, Irving, Harden, and Harris are all healthy, we know the Nets will be hard to beat.

Until then, Brooklyn will have to continue chugging along. It is imperative that each and every player realizes how important the next man up mentality is, and stick to it. Playing with high energy always gives a team a chance to win, no matter who is on the court. Nets fans, don’t lose hope; the future is still bright for this team as we approach the All-Star break.