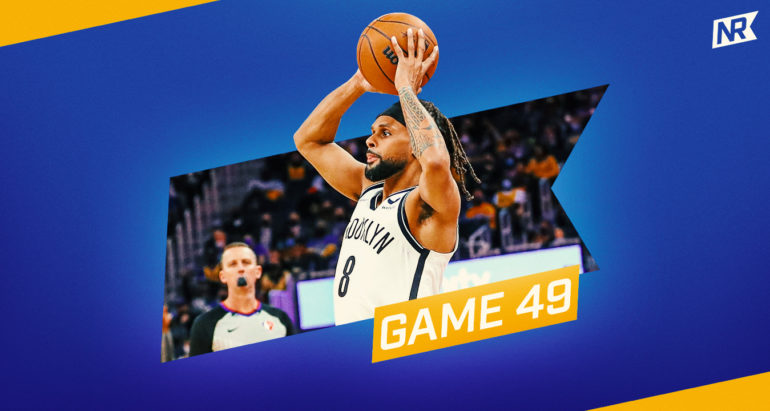 The past few weeks have not treated the Brooklyn Nets kindly. The battered team entered Saturday having lost three straight, struggling to find a rhythm without Kevin Durant and dealing with a part-time Kyrie Irving. Despite a valiant effort, the Nets were unable to break their losing streak against Stephen Curry and the Golden State Warriors.

Since he was a visiting athlete, Irving was cleared to play in Golden State. This was welcomed news for Brooklyn as James Harden was abruptly diagnosed with a strain in his right hand prior to the game, forcing him to sit this one out.

Brooklyn opened up the game with high energy, forcing turnovers and attacking the Warriors’ defense. Nic Claxton looked sharp to start, scoring a quick five points at the rim. Irving was, well, Irving, with his first bucket coming off of an impressive drive and score on Curry.

Brooklyn’s confidence wavered as the quarter progressed, though, as both Patty Mills and rookie Cam Thomas could not find their rhythm. Meanwhile, Andrew Wiggins was unstoppable in the quarter, scoring 14 points alongside several rebounds and two blocks. Golden State led for most of the period and entered the second quarter with a 31-20 lead.

Kyrie Irving came back into the game early in the second, driving aggressively and getting to the foul line. An extended run powered by solid defense and smart plays in transition helped cut the lead to four points as the Nets gained momentum. Patty Mills was able to find his stroke, hitting impressive back-to-back three-pointers that gave Brooklyn a 39-37 lead.

Toward the end of the first half, the Warriors’ offensive onslaught was too much for the Nets to handle with Irving back on the bench. Otto Porter Jr. hit two three-pointers in a matter of seconds, helping to lift Golden State to a 54-47 lead at halftime.

The third quarter was no different to start, as the Warriors did just about everything right, while the Nets struggled to find momentum. Golden State scored effortlessly on almost every possession, taking a quick 66-49 lead. Despite Irving’s smooth efforts on offense, Brooklyn’s lack of cohesive teamwork caused it to fall behind by as many as 19 points.

Still, toward the end of the period, Brooklyn’s defensive efforts stepped up in a big way. LaMarcus Aldridge played a key role, scoring and rebounding in the paint while notching three blocks. Irving scored fourteen points in the third quarter alone as Golden State’s lead was cut to 78-76 going into the final twelve minutes.

Brooklyn took its first lead of the second half on a James Johnson three-pointer, going up 81-78. But, Aldridge was forced to leave the game after suffering a left ankle sprain. Brooklyn’s defense faltered without Aldridge on the floor, allowing Golden State to regain the lead.

Despite the frustrations the Nets faced during the night, they found a way to stay within striking distance. Mills continued to hit timely buckets while Irving was simply sensational, though some close shots bounced in and out. With under a minute to play, it was a 104-103 ballgame.

That’s when things got wild. Mills lost Klay Thompson on a screen, who buried a three to give Golden State a four-point lead with 12 seconds to play. Then, Irving responded immediately, hitting a familiar shot to pull Brooklyn back within one.

A weird sequence on the inbound pass resulted in the Warriors being rewarded with a free throw attempt and possession, which ultimately sealed the game. Golden State hit all three attempts, and the Warriors closed out an exciting Saturday night showdown with a 110-106 home victory over the Nets.

Kyrie Irving is a Superstar

The legend of Irving continues to grow with each game, though he has been quite limited this season. On a night when Brooklyn was missing Durant, Harden and Joe Harris, Irving put the team on his back and gave it a chance to win down the stretch.

Irving finished the night with 32 points, seven rebounds, seven assists and three steals. When Brooklyn went down by 19 points in the third quarter, Irving single-handedly willed them back into the game, leading the Nets on a 20-4 run to close the period. When everything was on the line, he continued to knock down clutch buckets to keep Brooklyn afloat.

As the Nets continue on this road trip, they are going to need every ounce of Irving’s abilities to come away with wins; otherwise, this losing streak may continue.

Ultimately, Brooklyn did not do enough to leave Golden State with a victory. While there were some questionable calls down the stretch, the Nets still had opportunities to pull ahead and could not do so. This loss cannot be solely blamed on the refs, and should not be. Steve Nash is partially to blame, as he could have challenged a few calls in the fourth quarter but did not, leading to free throws for the Warriors.

Aldridge getting injured in the fourth was also a tough blow, and footage showed him leaving the Chase Center on crutches. Hopefully it is not serious, but fans will have to wait and see what happens.

On the bright side, Brooklyn nearly found a way to win despite the missing pieces. Both Curry and Thompson hit big-time shots toward the end of the game, but Brooklyn did an impressive job of containing those two throughout most of the night. Nets rookie Kessler Edwards was outstanding with clutch blocks in the final minutes on both Curry and Kevin Looney.

Health continues to be a major factor throughout Brooklyn’s regular season. Nash did say after the game he is “hopeful” Harden will be able to play Tuesday against the Suns. With Phoenix currently on a nine-game winning streak, the Nets will need all the weapons they can muster.