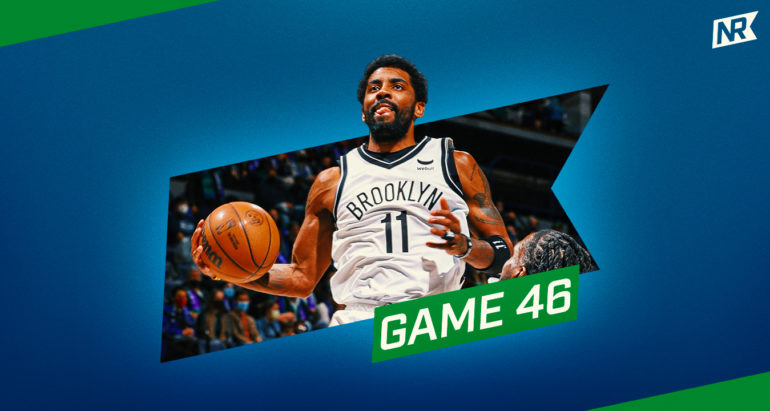 After an overall solid performance against San Antonio, the Nets were unable to complete their four-game road trip with a win. The Timberwolves’ scoring was too much for Brooklyn to counter as the Nets fell, 136-125, on Sunday.

The game started out fast and furious as both teams had it rolling offensively. By the midpoint of the first quarter, the two teams had combined for nearly 50 points. Leading the way early for Brooklyn was Kyrie Irving, who scored eight of his team-high 30 points in the opening frame. He got going early with a pair of threes, one of which was a heat check pull-up from Steph Curry range. He also did a nice job facilitating, picking up a trio of assists. The Nets as a team (aside from James Harden) were scorching, scoring 36 points on 55 percent shooting in the first quarter.

The problem for Brooklyn, however, was that the Timberwolves were operating at a higher frequency, which was the prevailing theme of the night. The second quarter saw the Nets get into an offensive slog, starting with Kessler Edwards picking up his third foul early in the quarter. Once he left the game, the Nets did not have the adequate floor spacing that has been seen in previous games. For the rest of the quarter, Harden and Irving had to deal with lineups with just one other floor spacer. Harden’s slow start also appeared to affect him mentally as he picked up a technical foul arguing with the officials.

Overall, the Nets had no answer for Minnesota’s scoring assault. And when they did have an answer, the Timberwolves had a counter. Though the Nets continued to chip into Minnesota’s double-digit leads, the Wolves would then go on a mini-run to keep Brooklyn at an arm’s length.

The nail in the coffin was when Steve Nash decided to go small and inserted James Johnson at center, replacing Day’Ron Sharpe at the 7:04 mark. With the Nets down six, Karl Anthony-Towns exploited his mismatches and helped power Minnesota to a 13-3 run, all but putting the game out of reach.

Brooklyn was not helped out by the officials, who missed some momentum-shifting calls. At the end of the day, though, the Nets were simply outplayed, outmuscled and outclassed.

Harden had arguably his worst performance since the Phoenix game earlier in the season. Although the assist numbers (13) were there, he managed to score just 12 points on 4-for-13 shooting from the field. His poor performance was a combination of a lack of foul calls, hindering his aggressiveness early, and playing with some unfamiliar lineups. But if Irving was able to make it work, then Harden could have, too. With Kevin Durant out and Irving only available for road games, the Nets cannot afford to have these kinds of outings from Harden.

Meanwhile, it was another great night for rookie Kessler Edwards, who put up a 15-point, five-rebound stat line. It is becoming clear that Edwards needs to remain a fixture, particularly in the starting lineup. Edwards’s ability to provide the Nets with another perimeter threat was on full display on Sunday as he splashed in a trio of deep balls. He also showed off his skill in the midrange by sinking a handful of pull-ups from the free-throw line. Kessler did rack up some tough calls, though, that took him out of the flow of the game.

It’s a shame Irving will be on the shelf for a few days as the Nets travel back home. Uncle Drew is starting to find his groove after his 30-point night to go along with six rebounds and five assists. He was the engine for Brooklyn’s offense all night and was a big reason why the team was able to stick around in the second half.

Of note: Irving averaged 27.8 points over the four-game road trip.

The Nets have two tough matchups at home next as they welcome the Lakers and Nuggets to town. Though Irving will not be available, the Nets may be getting some reinforcements back with Nic Claxton possibly returning to the lineup.