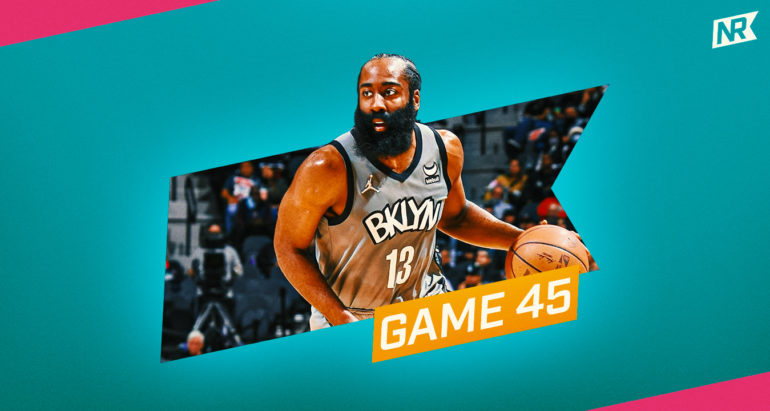 The road trip continued as the Brooklyn Nets traveled to San Antonio. After picking up a win against the Washington Wizards on Wednesday, the team hoped to continue to build momentum against the Spurs. In what was a tale of two halves for Brooklyn, the Nets earned their victory. The first half was ruled by a stifling defense, while the second half the Nets offense exploded. Positively, the Nets were also able to dominate the boards and score in the paint with ease. More importantly, was that the dynamic backcourt duo of James Harden and Kyrie Irving showed how dominant they can be in the win.

By the second quarter the Nets still shot cold, only 42 percent overall with 1/6 from three. However, James Harden joined the action, getting hot and scoring 10 points himself. Harden continued his solid playmaking and facilitating, by halftime he had seven assists to go along with 14 points. The Spurs still maintained a 51–50 lead heading to halftime, as they answered the Nets with quick runs. The big story with Brooklyn was the amount of players in the rotation. After only an eight-man rotation in recent games, head coach Steve Nash employed 11 players in the first half.

The third quarter is when the script flipped for the Nets. Shots began falling as the team shot 50 percent from the field. The third quarter was Harden’s to own. His aggressiveness led the charge with 12 points, made emphatic with a strong poster on Spurs center Jakob Poetl. Bench sparkplug Patty Mills also started to cook. After starting the game 0/6, Mills didn’t miss in the third. Aldridge also controlled the paint and the boards. Brooklyn continued their stifling defense, forcing a poor shooting quarter. The Nets took a five-point 79–74 lead in the fourth.

The NBA’s best backcourt in James Harden and Kyrie Irving showed how dominant they can be. The dynamic duo combined for 61 of Brooklyn’s 117 points. For Harden, after a subpar outing in Washington, it was great to see him be aggressive. Harden took charge and made his presence known at the rim, and found rhythm from the three point line. Harden also notched another 30-point triple double, finishing with 34 points, 11 assists, and 10 rebounds.

However, it was Harden’s mid-range game that really opened up the scoring. When he would not be able to get to the paint, it seemed like Harden’s mid-rangers would be automatic. I, like many other Nets fans, would love to see Harden take more mid-rangers, just like he did back in Oklahoma City many years ago. The middies open up his game more and will allow more opportunities to score other than settling for the step-back three. Harden’s mid-range can also help with spacing as it can allow cutters to back-cut to the basket as Harden draws so much attention from the defense.

Irving has continued his phenomenal play ever since his return. Irving scored 24 in the victory. All this in usual Kyrie fashion, looking like a magician on the court. The big takeaway for Kyrie is how much better he makes his teammates around him. With lineups that thrive on transition, Irving made it a priority to race out into transition for quick easy buckets. His ability to get into the paint with ease allowed for enough spacing on the floor for big men like Aldridge or Blake Griffin to cut to the basket for easy buckets. It also doesn’t hurt to mention that Irving is an absolute microwave and delivers when it matters in crunch time.

LaMarcus Aldridge and Patty Mills made their return in San Antonio for the first time since they signed with the Brooklyn Nets. As such, video tributes were necessary.

However, when it came to the actual game, both Aldridge and Mills showed how important they are as roleplayers in Brooklyn. Aldridge continued being a mid-range maestro and his solid play. Aldridge’s ability to pick-and-pop has been a huge bonus to the Nets offense. Importantly, Aldridge’s control of the paint has been a key to the Nets success. Not only can he bully-ball his way to the rim, but his defense around the rim as of late has been better. Controlling the boards with seven rebounds and swatting two shots away allow the Nets to get into offense quicker and more often.

As it has been all season, Patty Mills will never not have confidence shooting the ball. Case in point was this game. Even after starting 0/6 from the field, Patty kept shooting and found a rhythm in the second half. Though finishing 4/11 overall, his second half of shooting 4/5 was a huge boost to the Nets offense. His confident, sparkplug scoring was timely and helped build momentum, and the lead.

Throughout the season, Blake Griffin and Bruce Brown, who were key rotation players last season, have been struggling. Through bouts of being in-and-out of the rotation and being part of the “stay ready” group, they always brought upon good effort and energy. Tonight, they both made their presence known in positive plays.

Blake Griffin showed off his blue collar play in San Antonio. Memorably, he drew a charge that somehow sent his shoe flying. His pick-and-roll play tonight was a solid contribution in the victory. Griffin was able to get into the paint and drop in 10 points. Griffin also held his own on defense, and grabbed big rebounds that led to quick transition points. However, Griffin still is struggling to find his three-point shot. If Griffin is going to be a key rotation player again, he’s going to need to find that shooting stroke again.

Bruce Brown had a great stretch of defensive plays in the second half. On top of snagging two rebounds, Brown had a couple key blocks as well. Brown’s biggest contribution tonight was the momentum building two-way play to end of the third. On the last play of the quarter, Brown got a clean block on Derrick White, which led to an emphatic fast-break dunk right at the buzzer. Hopefully, Brown can build upon positive plays and improve and earn more rotation minutes amidst his current struggles.

I also would be remissed to not mention Day’Ron Sharpe yet again. Though he didn’t light up the scoreboard, but tried to put Spurs center Jakob Poetl on a poster, his rebounding was the big takeaway. Sharpe had 10 rebounds to his name in the game. Sharpe’s activity on the boards has been a big bonus for Brooklyn and could be a huge reason why he can be a candidate to be a key playoff contributor.

The Nets end their road trip by traveling to Minnesota to take on the Timberwolves. The game will take place on Sunday, January 23 at the Target Center. Tip-off will be at 8 p.m. EST.

With the win, the Brooklyn Nets improve their record to 29–16, and are currently on a two-game win streak. Hopefully, the Nets can keep momentum to finish off the road trip. Brooklyn is also back in first place in the Eastern Conference, holding a half-game lead over both the second-place and third-place Chicago Bulls and Miami Heat.