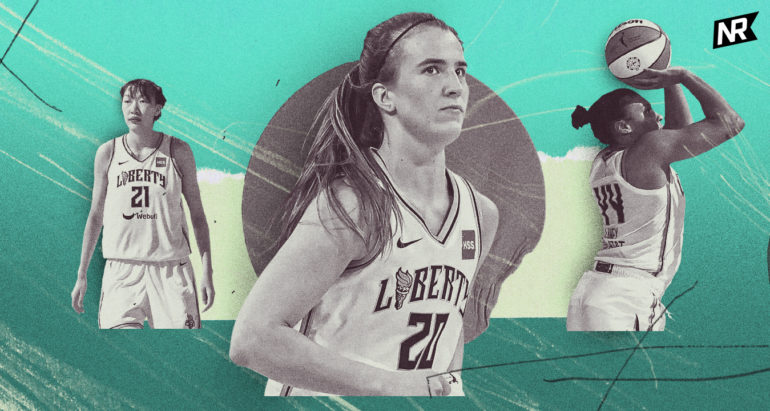 The 2022 season didn’t end with a championship for the New York Liberty, but they accomplished a lot. The team achieved its goal of making the playoffs, and gave the defending champions, the Chicago Sky, a good fight. They hosted their first home playoff game since 2017 and sold out the Barclays Center. As the season progressed, the Liberty attracted more and more fans into the building, continued to reestablish themselves as a franchise that cares about both winning and fan experience. They also tried some innovative things, like the Xbox alternate court, which earned rave reviews. With a big offseason coming up, we’ll look at the lessons they can take into 2023.

The Liberty played high-stakes basketball for three weeks to make it to the playoffs. Pressure busts pipes, but it also makes diamonds. As battle-tested as they were, they still were at a disadvantage. The Sky’s experience made the difference. In the fourth quarter, Sabrina Ionescu had the champs reeling and Barclays Center rocking:

A lesser opponent would’ve folded, but champions rise to the occasion. The Sky went on a series-clinching 16-0 run that silenced the sold-out Brooklyn faithful. The Liberty’s inconsistency, a season-long struggle, shined through as they rushed through possessions to make up the deficit, but the uneven shot selection led to odd-man rushes in transition. Now that they’ve gone through their first playoff series, they’ll look to build on this year’s foundation.

In their exit interviews, Natasha Howard and Betnijah Laney mentioned that the team could use a veteran, experienced, point guard. Having another guard to keep the offense flowing and take pressure off of Ionescu, as Crystal Dangerfield did this season, will be critical. When Chicago turned the pressure up in game two, New York wasn’t able to adjust, losing them all the momentum they’d earned in game one.

Related to that point of experience is continuity. Under a new head coach, it took Liberty players time to get used to how Sandy Brondello ran things. Michaela Onyenwere spoke of that transition from Walt Hopkins to Brondello:

“There were a lot of growth points this year where I had a hard time understanding exactly what my role was. I had a hard time understanding what the system was. It was new for me, new coaching staff. Different than last year where I was mainly a shooter and spacing the floor. Here, you had to really learn the game, know the game, know the reads. Setting ball screens, which is something I wasn’t doing last year. It was tough for me for sure, but just staying the course is something that I really learned. I think it’s gonna make me better in my career. Learning this so young, I think it’s really, really good that not everything is gonna be peaches and cream like maybe it was my rookie year. And I’m gonna continue to get better, face it head on, and I’ll be OK.”

Stefanie Dolson mentioned that it wouldn’t make sense to turn over the entire roster, and she’s right. Throughout the exit interviews, everyone acknowledged that they’re a few tweaks away from breaking into the upper echelon of the WNBA. With the 2023 season expanding out to 40 games, keeping most of the roster in tact will help them get off to a much better start to the season.

Scoring at the rim

We previously mentioned that the Liberty’s ability to get into the paint and finish at the rim was important to their success. In the series vs. Chicago, their paint struggles returned. Although they took 22 shots a game inside the restricted area (third highest), they only made 58 percent of them. That mark was the second-worst in the playoffs. The Liberty had some bad luck at the rim in game three, but they can still improve in that area. In her exit interview, Sandy Brondello spoke about one thing the team will need to fix:

“We relied too much on outside shooting, so that’s why we have to add that other piece where we can get to the rim a little more.”

Sandy also mentioned the team could use more isolation scoring. Luckily, a healthy Betnijah Laney solves that problem. Laney is the team’s best scorer and can get buckets in all three levels. When games get tight, Laney can create her own shot and make good things happen. With Laney back at full strength, the Liberty have a chance to be more consistent and higher than the seven seed when the playoffs hit.

Isolation scoring is something Ionescu will be working on this offseason as well:

“(Beating defenders off the dribble) is definitely something I’m capable of. I just haven’t been able to train at for the last two years. I’m definitely excited to bring that next season.

This year, I faced a lot of teams trapping and hard hedging and bringing two on the ball. If I’m able to create offense without using a ball-screen, it helps that much more.”

With Ionescu getting better at creating her own shot, she’ll get to the free throw line more and earn easier scoring opportunities. She’s also healthy in the offseason for the first time, which will allow her to build on her game. She’s an All-WNBA player already; if she can up her game to an MVP level, watch out world.

A fully healthy team in 2023 will also give them more depth and athleticism. Throughout the season, Brondello noted the loss of Rebecca Allen to concussion symptoms. Allen is one of the team’s best athletes and finishers at the rim. A full season with Allen and DiDi Richards will give the team the size and athleticism needed to battle with elite forwards across the WNBA.

The Sky won this series, in part, based on their board work. Rebounding was a Liberty bugaboo all year, and the Sky outrebounded them in each playoff game. Han Xu struggled with the Sky’s physicality, which will be a point of emphasis for her as she returns to China for the winter.

Laney shouted her out in her exit interview, and also mentioned Nyara Sabally’s 2023 WNBA debut. Sabally, taken fifth overall in the 2022 WNBA Draft, addresses a lot of the team’s needs. Assuming they want to fill out the holes internally, a rotation of Dolson, Han, Howard, and Sabally will help on the interior and offer New York a potentially stronger low-post presence.

Altogether, the Liberty are on the right path heading into 2023. They’ve developed a good young roster and are knocking on the door of contention. If they can take the lessons they learned from the 2022 playoffs, continue developing, and make a good move in free agency, they can take care of some unfinished business.