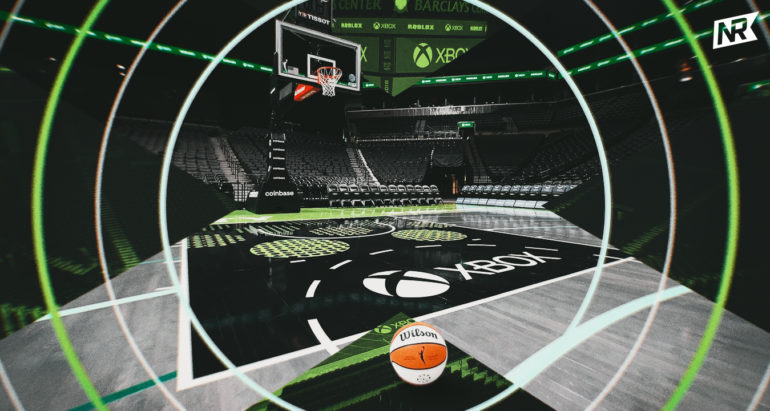 Tuesday, August 2, was a banner evening for the New York Liberty. They beat the Los Angeles Sparks by 29 points as they helped their playoff push. They also made a little bit of history off the court… well, on the court, in a manner of speaking. In collaboration with Xbox, they debuted the first gaming inspired basketball court and the first secondary court among current teams. The court earned raves across social media and has fans excited to see what’s coming next. We spoke with Chris Munson, Senior Global Xbox Sports Partnerships Lead, on the court about the collaboration and plenty more. Here’s our conversation:

On how this collaboration came about:

“We are partners with the New York Liberty and as we started to ideate about things we can do with them, we came up with a really cool idea of ‘What if we brought a real life court into your universe here? And oh, by the way, maybe we can also work with Roblox and bring it into the virtual world as well!’ So, we started working on it for many months. Went through a lot of different approval processes and finally got to the place where we actually built a court. So we collaborated with the Liberty, Roblox, of course ourselves Xbox, and even Pepper [Persley] provided some really great perspective to actually add a lot of stuff into the Roblox version of the game. Today, you see the proof in the pudding right here.”

On how he sees the collaboration building out in the future:

“We are long time partners with [the Liberty], so we’ll continue to work with them. The Roblox product is a game that is on our platform, the Xbox gaming platform, so we’re really excited to continue working with them on all these types of things. Certainly and ultimately, the ideas that we can come up with the Liberty are gonna get bigger and better as the result of this. I think the future looks really great when something like this comes to fruition.”

On bridging the gap between fans who may be more familiar with video games and the actual real life experience:

“Xbox is all about empowerment and as our platform has expanded from just only a console, to PC, mobile, Cloud, etc., so too are the consumers and the fans out there that we want to speak to. So for us, sports is a great vehicle for us to speak to a lot more people. Here in basketball, the WNBA, and certainly the most critical thing for us is empowering the next generation of game changers out there. Women, young women, boys, girls, you name it. We’re all out here making sure that we’re also speaking the language of people who are all playing their sports or video games already.”

On the importance of having diversity and building the pipeline for young people to stay connected to the game:

“Ultimately, the way that Phil Spencer has spoken about our platform, and even Satya Nadella, who’s the CEO of Microsoft, the idea is that more inclusion delivers better results. Whether it’s business or just doing better in society, and at Xbox, it’s vastly important that we speak the multitude of languages of people who are already on our platform, because it’s wonderful, it’s diverse, and we’re really gonna push the boundaries of that type of inclusion. So for us to work with the Liberty, for us to work with the [Atlanta] Dream and other teams within basketball, it’s vastly important that we speak to women gamers and also women who play sports because ultimately there’s a great collaboration and connectivity between that to extend everything within women’s sports. Very, very important for Xbox to be a part of that new wave into women’s sports.”