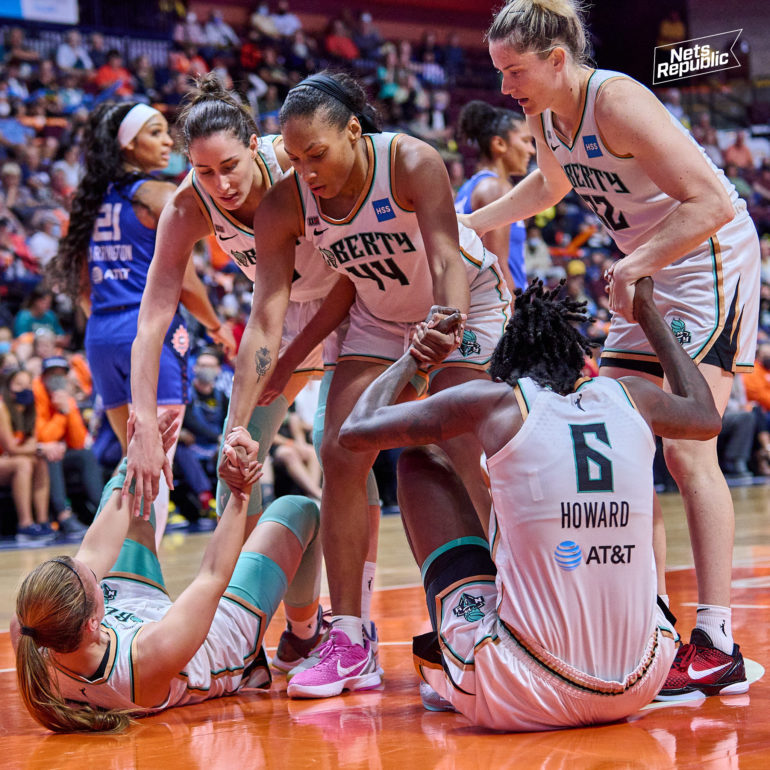 It’s a mad dash to the finish line. With an expanded, yet condensed 2022 WNBA season beginning to wind down, the New York Liberty are in an interesting position. Their record is 10-17, but heading into Friday night’s matchup, they sit just 1.5 games behind the seventh and eighth seeded teams. The team has nine games to go in the season, and the final eight will be against the teams seeded sixth through ninth. There are some questions that will define the rest of their season and determine if they can make it to the postseason. Let’s get into it!

Can they get to the basket more?

Throughout the season, Sandy Brondello has noted that her team isn’t the most athletic in the league. They’re more of a jump shooting team, and it bears out in the numbers. On the season, the Liberty are:

The Liberty traded in threes for more rim attempts against the Chicago Sky, as their 31 shots inside the restricted area were a season-high. They only made 45 percent of those shots, which is something they need to improve. Also, the Sky shot more threes than the Liberty, the first time that’s happened all season. I asked Michaela Onyenwere about getting to the basket more, and here’s what she said:

We are really known as being a three-point shooting team. That’s not all we are. We have really great post play, but there’s other ways to get into the paint. That’s driving to the paint, getting fouled, being aggressive in that way. We were able to exploit that just a little bit on the pick-and-roll matchup where they weren’t rotating as well to the roller, so we were able to get a lot of those rolls. We’ve talked about being a team that can get good to great. We’re always gonna be a good three-point shooting team. That’s a given, we have really great shooters who put in the time, the effort, and the work. But you can really tell the sentiments of a team when they can get into the paint and get really good shots. So I think that was good for us to be able to continue that and build on that.”

Sandy Brondello has mentioned that Sabrina Ionescu is probably the best on the team at getting downhill and putting pressure on the rim.

Stefanie Dolson had one of her best games of the season on Saturday; her passing and finishing ability opens up a world of possibilities.

The team getting easier baskets at the rim will improve the offense and give opposing defenses something else to worry about.

Natasha Howard has carried the team on the inside this season. She’s taken close to five shots a game in the restricted area, good for seventh in the league. Howard has developed wonderful chemistry with Ionescu and been a steady presence all season long. She’s mentioned in the past that she cares more about her impact on defense, but her offensive skills are second to none.

Will Betnijah Laney be back in time?

Right now, the injury report for the Liberty is the cleanest it’s been all season. However, they’re still missing one of their best players.

Betnijah Laney has been out of action undergoing knee surgery in June. A knee injury slowed her down during the second half of the 2021 season, but she powered through it. The Liberty have spoken about how they’ve missed what Laney brings to the table, such her scoring, defense, and on-court leadership. When Laney makes her return, the team will finally be complete.

Laney’s return will provide an immediate boost. She gives the Liberty another elite scoring option to pair with Ionescu and Howard. Jackie Powell of The Next made a fascinating point recently. We haven’t had a chance to see the big three fully healthy as all three members have dealt with injuries over the past two seasons. If everyone’s healthy and playing well, NY will be in prime position to go on a run.

After the blowout loss to the Las Vegas Aces, Sandy Brondello acknowledged that Marine Johannès and Han Xu have been struggling recently. It’s understandable as they were both playing their first ever Camp Day games. They also played overseas and didn’t take a break before resuming WNBA action. A lot of players in the W play year round, and 11 AM games place an extra toll on them.

Now that the WNBA is done with this year’s morning games, Johannès and Han are back to their normal routines. Against the Sky, Han scored in double figures for the first time since her Las Vegas masterclass in early July. MJ has found her shot after a slump, and her role as a shot creator will be critical. Johannès is a creative finisher at the rim and a sensational passer. Han has a soft touch at the rim, is developing by the day, and is a fan favorite at Barclays Center. If they play to their standards, the Liberty bench will become formidable.

Can Sabrina Ionescu close out the season on a high note?

In a lot of ways, this has been a breakout season for Ionescu. She made her first All-Star Game, set triple-double records, and has been the star New York basketball needs right now. She’s been healthy and lived up to her star potential. With that potential comes teams placing a lot more attention on her. So far, she’s adjusted and overcome all the obstacles defenses have thrown at her.

With nine games left, Ionescu will look to build upon her game-winner against the Sky. She doesn’t get as many calls as she’d like, but referees are finnicky, so that might change for the better. At the same time, she hasn’t let the lack of foul calls slow her down and has succeeded despite it.

As Sabrina goes, so go the Liberty. When she is assertive, applying pressure, and pushing the pace, she’s outstanding. She always makes the right play and makes sure to get her teammates clean, open looks either at the rim or from deep. If Ionescu is controlling the game, then the team can push, get out in transition, and get those rim attempts we talked about earlier. If she can help lead the team into the playoffs, it’ll boost her All-WNBA chances tremendously. It would be a great reward for an excellent season and something to build on in the future.