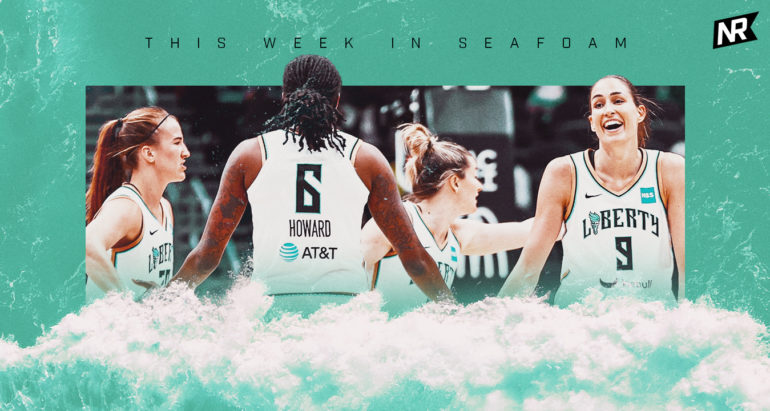 Well…the New York Liberty played some basketball games this week. They did not go well.

The team’s first game after the All-Star break was a home game against the Aces, which New York lost 107-101. Not great…but hey, a close one against one of the league’s elite teams!

And then the team followed that up with another loss, this time 108-74, also to the Aces. Now, they’re gearing up for a week that features two early games: hence the title this week, Noon York Liberty. Clever? No, not really. Sorry.

The Liberty left their offense in Vegas

What happens in Vegas stays in Vegas, which must be why the Liberty went to Las Vegas and had their best game of the season, putting up 116 points in a win, and then they left Vegas and lost three straight games, including two to the Aces. New York’s ability to beat the Aces must have stayed behind in Sin City.

This three-game…series? sure, let’s call it a series even though a loss to Phoenix was sandwiched in between…showed us that the Liberty have moments where they can score on anyone…and other moments where everything falls apart.

That probably shouldn’t have been a surprise, though. The Liberty are an imperfect team. They turn the ball over too much. They have random nights where the shots go cold. They’ve piecemealed together their rotation through injuries and midseason signings.

The fact that the Liberty offense looked progressively worse in each game is a concern for this team if it manages to sneak into the postseason. They just don’t have enough ways to hurt you. Shut down Sabrina, and you sort of shut down the rest of the team.

In that third Vegas game, Ionescu was 1-for-8 from the floor. She was a -21 for the game, second-worst on the team behind Natasha Howard, who was a -31.

This isn’t to say Ionescu deserves the blame for the losses. Everyone has off nights. If Ionescu’s off night sees her finish with nine points and six assists, that shouldn’t mean the Liberty should just be penciling in a loss. Other players have to step up.

Maybe the impending return of Jocelyn Willoughby and Betnijah Laney will be the thing that changes that.

Anyway, that was a long rant. Sometimes you’ve just got to get the ranting out of the way, right?

Anyway, some positives from these two games:

Jocelyn Willoughby is set to return

Jocelyn Willoughby is back for Tuesday’s game against the Sun. This will be her first action since May 15, when she played 17 minutes against Dallas.

Willoughby’s numbers from her four games this season aren’t great, but a four-game sample with her returning from an Achilles injury probably isn’t really indicative of who Willoughby is.

It’s been a bit, but in 2020, Willougby was one of the few bright spots on that Wubble team. Here are some things I wrote after her Achilles injury about what I was expecting her to bring to the Liberty:

[In 2020], Willoughby was the only Liberty player to shoot over 40 percent from deep, connecting on 40.5 percent of those shots. While she only attempted 1.7 threes per contest, her shooting ability was still a positive sign on a team that struggled all year.

Among all players to attempt at least one shot per game from less than five feet, Willoughby had the league’s worst field goal percentage at 31.0 percent.

But if we isolate things down to just her jump shooting, we get a much different story. She generated 1.096 PPP on her jump shot attempts, which ranked in the 86th percentile. She was in the 97th percentile in dribble jumper PPP, and was effective shooting from deep and from the midrange. Her jump shooting numbers show someone who could be an elite level spot-up threat, even if she was essentially the league’s worst finisher at the basket. Playing with better talent around her could have likely helped Willoughby’s efficiency when she drove, as there would have been more space inside for her.

She was also a solid defender. Per Synergy, opponents shot 39.1 percent when guarded by her, and she was especially strong when guarding outside on spot ups, ranking in the 73rd percentile in PPP allowed when defending spot ups.

Adding another player who can shoot and, more importantly, defend back into this lineup will be important. If Rebecca Allen can get back to full strength after she missed time earlier this month with a concussion, the Liberty will have a pair of versatile forwards who can play the two, three and four (though I know, I know, this team doesn’t play small ball, as much as I want them to). Willoughby will provide some good bench production.

So, what’s up next for the Liberty?

The good news: that Sky game is at home.

Then there’s the Mystics. New York has been surprisingly good against Washington, beating them 74-70 and 77-65 in two meetings. Another surprising result! Though it should be noted that only one of those games featured Elena Delle Donne.

And finally, there’s Chicago. After beating Connecticut on opening night, hopes were high for New York. Those hopes were quickly crushed in an 83-50 loss to Chicago. Things got closer in the next meeting, with New York losing 88-86. Maybe they’ll get even better on Saturday?

After this week, the Liberty’s toughest stretch of the season will almost be over. They’ll face the Sky again on July 29, but after that, the team closes with eight games in a row against teams under .500. They just need to steal a win or two over these next four games to set up a potential playoff push.