Despite a lack of draft picks, Sean Marks and the Brooklyn Nets front office has managed to build a respectable young basketball team.

As soon as Sean Marks joined the Brooklyn Nets organization, the former San Antonio Spurs Assistant General Manager hit the reset button and got to work.

Just days after Marks joined the Nets front office, the team flipped Bojan Bogdanovic and Chris McCullough to the Washington Wizards for two throw-in players and a first-round draft pick. That pick, (the 22nd pick in the 2017 NBA Draft) would be used to select Jarrett Allen.

When the draft came along, Marks flipped Brook Lopez and the 27th pick in the draft for Los Angeles Lakers standout D’Angelo Russell and Timofey Mozgov‘s contract.

Later that summer, the Brooklyn Nets would once again take on salary in order to gain assets. Brooklyn absorbed the contract of DeMarre Carroll in exchange for the Toronto Raptors’ 2018 first round (top 14 protected) and a second-round pick. As things stand, the Nets will be going into the 2018 NBA Draft with one first-round pick and potentially three second-round picks.

Following the trend of Brooklyn rebuilding through a combination of draft picks and reclamation projects, here are two young players that the Nets should look into acquiring before the trade deadline:

The Orlando Magic selected Serbian-born Mario Hezonja with the fifth pick of the 2015 NBA Draft after the youngster showed potential playing with FC Barcelona Basketball in Europe.

Hezonja’s first two seasons in the league were nothing short of underwhelming. However, former Orlando head coach Scott Skiles might have been trying to fit a square peg into a round hole. With Skiles, Hezonja spent 72 and 73 percent of his minutes at small forward and even spent time as a guard.

Under Frank Vogel, the 6’8, 22-year-old has performed 69 percent of his minutes at power forward and just 31 percent at small forward. In his third campaign, the young forward is posting career highs across the board. Hezonja is scoring 7.5 points per game while shooting 46.4 percent from the floor and 35.5 percent from three.

Marc Stein of the New York Times reported the Magic will be selling hard prior to this year’s trade deadline, including Hezonja:

“Rival executives expect Jeff Weltman, Orlando’s new team president, to aggressively hunt for new homes for the likes of Fournier, Payton and Hezonja, given that Nikola Vucevic’s broken finger is likely to preclude dealing the center.”

Why Hezonja works for Brooklyn Nets?

Turning 23 years old in the coming weeks, Hezonja still has potential to develop into a respectable role player. The Magic’s asking price shouldn’t be too hefty, especially if they’re trying to sell.

Hezonja shown the league his potential just this week in a win against the Miami Heat. The forward had an all-around respectable night, ending with 20 points, five rebounds, and three assists. He also came away with two steals and a block on the defensive end.

When Hezonja is playing confidently and his shot is falling, he oozes potential. Against the Heat, he shot an efficient 7 for 14 from the floor and was 4 for 9 from three. Hezonja’s highlights from the game against Miami are noted in the video below.

You can see the potential in Skal Labissiere just by looking at him. The soon-to-be 22 year old stands tall at 6’11 and has a wingspan of 7’0.

Coming out of the University of Kentucky, Labissiere was seen as a stretch-four prospect similar to Channing Frye. Originally projected as a top-ten pick, the Haitian-born baller shockingly fell all the way to the Kings at 28th.

Labissiere hadn’t stuck out at Kentucky, but all the intangibles were there. He had a nice shooting touch and could block shots.

But, his skinny frame allowed him to be bullied his freshman year.  Moreover, his passion and motor were questioned. Now in his sophomore season, the youngster is once again showing the potential to become great. 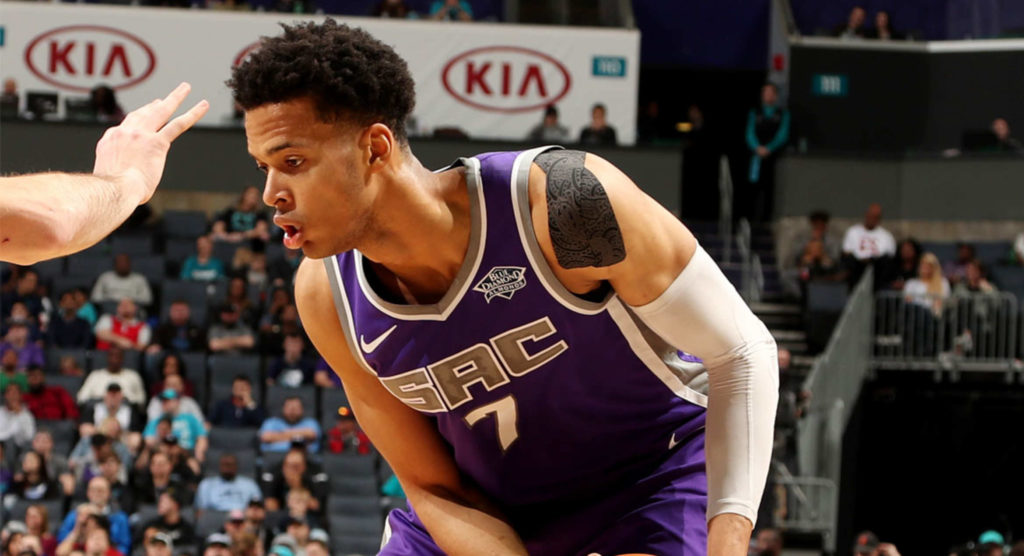 Labissiere is averaging 7.9 points and 4.5 rebounds in an abysmal Sacramento offense. His shooting numbers of 46.3 percent from the field and 34.8 percent perimeter average don’t stand out. However, they also aren’t terrible. Most importantly, the forward is young and still developing with plenty of fundamental areas to improve.

Earlier this season versus the Charlotte Hornets, Labissiere scored 17 points and grabbed 15 rebounds. The forward can score in a variety of ways and has shown a soft touch with both hands. Most importantly, his jump shot mechanics are on point and the potential of becoming a three-point threat is obvious.

When Labissiere can get to his spots on the floor, he almost looks unstoppable. The biggest issue with the forward is that he’s still bulking up and can easily get knocked out of these spots. Here are Labissiere’s highlights from the 17 point, 15 rebound game against the Hornets:

Why Labissiere works for Brooklyn Nets?

Labissiere is the perfect player at the power forward position to compliment Nets’ rookie Jarrett Allen. Allen has also shown promise in regards to a three-point jump shot, which would make the combination deadly. Labissiere can stretch out the defense with his shooting and open up the paint for Allen, or vice versa.

The forward’s name arose in trade discussions when the Kings were discussing a George Hill trade with the Cleveland Cavaliers. An ESPN article mentioned that Sacramento had been discussing deals for Labissiere along with Malachi Richardson.

While the trade never went through, it wouldn’t be shocking if the Kings were still actively shopping Labissiere. Their roster is full of big men and the team used a first-rounder on another power forward, Harry Giles, in last year’s draft.