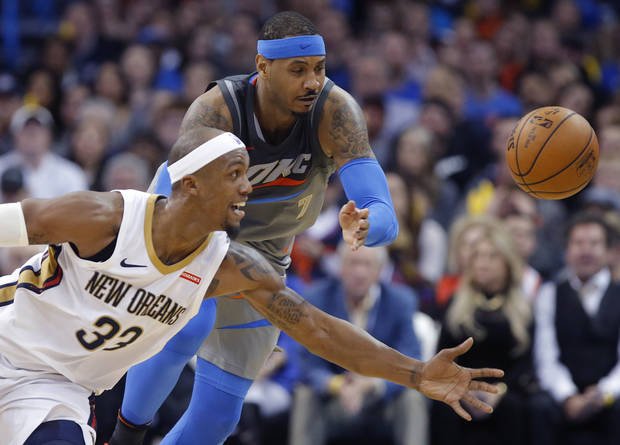 Per Yahoo Sports’ Sham Charania, the Brooklyn Nets have acquired Dante Cunningham from the New Orleans Pelicans in exchange for Rashad Vaughn.

The trade comes just days after the Nets traded Tyler Zeller to the Milwaukee Bucks in exchange for Vaughn and a second-round draft pick.

While Vaughn only saw four minutes for the Nets, the young guard was excited about a fresh start. However, Vaughn was bound to have trouble breaking into a Brooklyn rotation full of young guards.

Oddly enough, Dante Cunningham had a veto-power via his contact with the Pelicans but did not veto the Brooklyn trade. Additionally, TNT’s David Aldridge added that the 30-year-old will not seek a buyout from the Nets.

Dante Cunningham had an implicit no-trade with the Pels. He apparently waived it to go to BRK, squares w? @DaldridgeTNT report he will not seek buyout

Cunningham was almost traded to the Detroit Pistons earlier in the day in exchange for Brice Johnson and a second-round pick. However, the trade ended up falling through for reasons unknown.

Detroit would be sending a future second round pick to New Orleans in potential Brice Johnson for Dante Cunningham deal, per source. Wolves also potential Cunningham destination if Pistons deal doesn’t get completed.

In his trade deadline live blog, Sports Illustrated’s Jake Fischer revealed that league sources had told the crossover that Cunningham had requested a trade from the Pelicans.

The eight-year veteran forward can play the three and four spots interchangeably. Dante Cunningham played decently for the Pelicans this season, averaging 5.o points and 3.8 rebounds in 21.9 minutes per game. With only one true power forward on the roster, Cunningham will likely be used as DeMarre Carroll‘s backup. Atkinson will likely switch Cunningham between the small and power forward spots. The forward is a career 32.5 percent three-point shooter. Cunningham provides scrappy wing defense, something you can never get enough of.

How Cunningham Affects the Cap:

Dante Cunningham’s contract is an expiring $2.3 million deal that will have little to no effect on the Net’s cap situation. With Vaughn’s $1.8 million contract going out, the Nets are left with around $3 million left in cap space. The team can choose to re-sign Cunningham in the offseason if the front office is happy with his production.

Cunningham is a 30-year-old wing that can’t shoot but coming off a career year with the Pelicans. His contract isn’t awful, but it seems counter-intuitive that the Nets would trade a young player like Vaughn in exchange for a veteran. Cunningham will surely help Brooklyn in the short game, as they are short on wings/forwards. However, the eight-year veteran doesn’t help the Nets rebuilding efforts in the long run. If anything, the trade is one of Sean Marks weaker deals. It doesn’t help nor hurt the Nets in the long term.

Brook-Lin.com thanks Rashad Vaughn for the few days of service and wishes him well in his new endeavors. Additionally, the Brook-Lin writing team welcomes Dante Cunningham (Twitter:@DlamarC33) and looks forward to covering his efforts with the Nets.