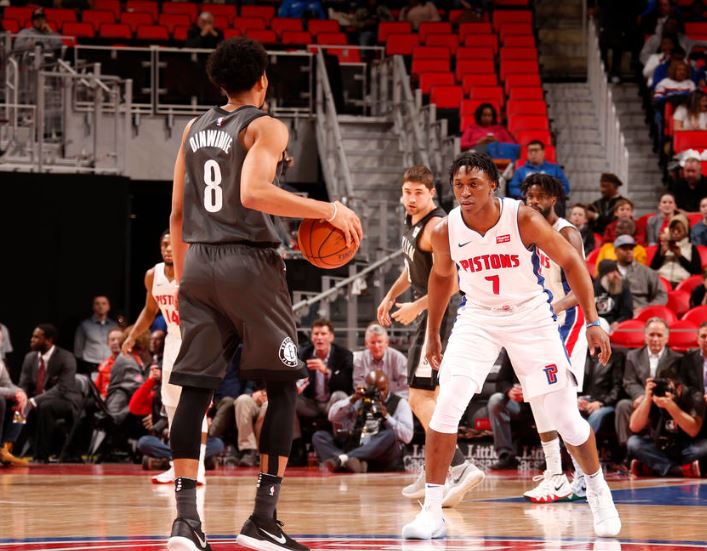 The Brooklyn Nets were unable to finish off the new-look Detroit Pistons Wednesday night. The game seesawed back and forth. The Nets’ bench play allowed for blowout scares at times, unfortunately putting even more pressure on the Nets’ starting lineup. The last five minutes of the 4th quarter gave the Nets hope, but Blake Griffin seized the moment in the final minutes of the game. The Pistons went on to win at home 115-106.

Andre Drummond and Blake Griffin finished the game shooting a combined 38 percent. Typically, forcing an opponent to shoot such a low percentage is a positive. However, the Nets gave up 30 rebounds between the two, which allowed the Pistons to keep the Nets desperately fighting on the boards. Drummond snagged 27 rebounds, including seven offensive boards. Per NBA Stats, Drummond’s rebound total is the most recorded by a single player this season. He also recorded three blocks; Drummond executed two rejections on the same possession victimizing two separate players.

In the past, Drummond’s free throw numbers were under heavy scrutiny, rightfully so.  This season would make a free throw coach blush. Drummond is shooting 61 percent from the charity stripe. He shot 7-10 tonight, not exactly a hack-a-Drummond kind of night.

Blake Griffin was not to be ignored tonight either.  Despite the mere three rebounds he collected, Griffin was the facilitator for the Pistons, dishing out seven assists. Early in the first half, he wasn’t as effective in the post, but down the stretch of the game, Griffin found his confidence (note the flashy handles in the 4th quarter) which allowed for him to open up the floor with his passing. Griffin’s off-the-dribble three-pointer was icing on the cake.

No rational Nets’ fan was expecting D’Angelo Russell to play lights out while recovering from knee surgery. With that said, some mistakes aren’t as forgivable as others. Russell’s alarming six turnovers (four in the 1st quarter) is what stood out Wednesday night. In the first quarter, Russell traveled at the top of the key after picking up his dribble while matched up with Drummond. He did have the pass of the game, converting a bounce pass to finish off a fast break. However, in the grand scheme of the game, he had a poor showing.

Jahlil Okafor only played nine minutes Wednesday night. Mainly due to Andre Drummond putting him in the torture chamber in the post, forcing four fouls on the outmatched center. Okafor posted a game-low -18 in the +/- boxscore. Not much else to say on Okafor’s behalf.

Nik Stauskas posted a goose egg in all scoring categories. His recent play is discouraging, his looks were as open as a player could ask for, and yet, he couldn’t convert. Stan Van Gundy only played three players off the bench, while Atkinson rotated out six.  Perfect case of quality over quantity.

Stanley Johnson is never confused for an offensive juggernaut. However, his play on Wednesday night needs to be acknowledged. Johnson finished with 19 points on 9-15 shooting, including a rare three. His sheer strength and size helped him in matchups with Nets’ guard Joe Harris. Johnson didn’t force any bad shots and knew how to use his body to his advantage.