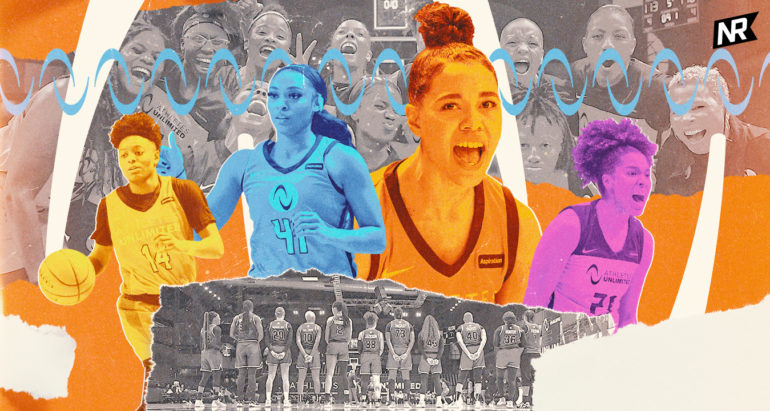 On the closing night of Athletes Unlimited’s first basketball campaign, nobody wanted the league to end. It had been five long weeks in Las Vegas, and players had settled into the routine: the televised draft, a couple of days of film and practice, three games in four nights, then do it all again. The last game on the schedule paired the top two points leaders (and Washington Mystics teammates), Tianna Hawkins and Natasha Cloud, platforming some of the top talent participating in AU.

The on-court product thrived, as evidenced by the game taking three overtimes before Team Hawkins could secure the win. But it was the off-court camaraderie, showcased throughout, that grew AU’s culture so quickly, so organically.

“As far as the atmosphere,” Kelsey Mitchell said, “it’s a lot more fun, a lot more authentic. AU just allows you to be who you are, whatever presence you are, wherever your feet is.”

Basketball is the fourth sport AU has built a league around, following softball, volleyball, and lacrosse. “When we started Athletes Unlimited, basketball was on our radar right from the beginning,” CEO Jon Patricof told Nets Republic. “Honestly, we didn’t know if the timing was right. We knew that, with the WNBA and certainly a lot of other professional opportunities that are around, we knew the bar was going to be high.”

When they were ready to give hoops a shot, Patricof knew who to reach out to for the potential league’s first assist. “Natasha Cloud had come to our first softball season [and was impressed with the on-field product], so we decided to call her and say, ‘What do you think? We think now might be the time.’ And she said, ‘Absolutely, let’s do it.’ Last spring, we started the planning, and things started to fall into place last summer. We decided to go for it.”

With the existence of the WNBA, along with both college and overseas hoops, AU had no shortage of options when filling out the talent pool. Some names were announced early, like Cloud, Sydney Colson, and Ty Young. Open tryouts in Atlanta filled more spots, while word of mouth helped to onboard more players from the W.

While Patricof was quick to note that these were “incredibly talented, amazing players that have a lot of options,” AU provided something many of these athletes didn’t have otherwise: a chance to stay in the United States to play basketball in front of friends and family. A majority of W players need to supplement their income by lacing it up for a secondary offseason league, and there’s been an untapped market domestically. Athletes Unlimited—and the WNBA, for that matter—still has a long way to go if it’s to match the salaries offered across the Atlantic, which often triple or quadruple the pay offered in the league that attracts the world’s top women’s basketball talent.

“The reality is that the WNBA season is only about five months,” Cloud said. “So, to have a league here, to establish another league here in the States, where women don’t have to go overseas and be away from their families, where they don’t have to put their bodies through year round-play. Just five weeks playing competitive basketball. It means everything for me to be an intricate part of bringing this here, because it’s a progression of women in sports. When we’re talking about investing in women, believing in women, valuing women and what they bring, AU is a prime example of that.”

That success extends further than just having the league here. It’s building off the successes of AU’s existing sports to put a polished product on TV. It’s pairing women’s basketball legends, Sheryl Swoopes and Cindy Brunson, on the broadcast. It’s taking input from players every step of the way, and even providing flexibility to players that needed it, like Mitchell, who missed a week to participate in USA Basketball FIBA Cup qualifiers.

“I don’t know how many organizations would have been okay with that,” Mitchell said. “For this to be the first year [of AU], for me to be committed to them and also want to commit to Team USA, I’m forever indebted to them because most people wouldn’t have allowed it.”

Another unique side effect of AU’s January-to-February timeline: it coincided with WNBA free agency. Some current W players had to absorb transactions—or even negotiate contracts—while at Athletes Unlimited. Mercedes Russell re-upped with Seattle while in Vegas, while Hawkins and Cloud saw former teammate, Tina Charles, sign with the Phoenix Mercury. Detailing her own experience in covering the league, Khristina Williams wrote, “Athletes Unlimited is not meant to compete with the WNBA, but to complement it.”

Some of the league’s top minds took notice. Curt Miller of the Connecticut Sun and Mike Thibault of the Washington Mystics were among the head coaches to stop by to watch the action. Both had multiple players participating in Vegas, and both added new talent to their training camp rosters after scouting from the sidelines.

Taja Cole, who is headed to Connecticut, was the first AU player to ink a TC deal, while MeMe Jackson, who impressed with her consistency from deep, is DC-bound. Seattle Storm head coach Noelle Quinn also popped by, and sure enough, Seattle made a roster addition of their own, inviting Lauren Manis to training camp. Both the Mystics and Storm also had scouts in the huddles, with assistant coaches Shelley Patterson and Pokey Chatman acting as AU facilitators.

“I think it’s certainly given them a chance to see players that otherwise might be overseas or not as accessible,” Patricof said. “And playing right here in the United States probably helped. It gave them some more visibility, which I think is awesome and terrific. We’re all about creating more opportunities.”

With the undeniable success of the first campaign, even more players will want to participate in season two of AU Hoops, already announced for 2023. As it’s already proven itself to be a pipeline for professional hoops, it’s sure to entice top-tier talent for the sequel. And, existing at the intersection of skill (as an opportunity for players to hone their craft) and fun (enriching the women’s sports meme landscape), Athletes Unlimited found a way to channel basketball in its purest form.

“To me, it was different when you hear it on the phone or see it on a PowerPoint,” Mitchell said, reflecting back on the pitch meeting back when the hype was all hypothetical. “But being here and seeing the setup, with everything that went into it, it’s the dopest thing I think I’ve ever seen. It was just an experience we’ve been looking for.”