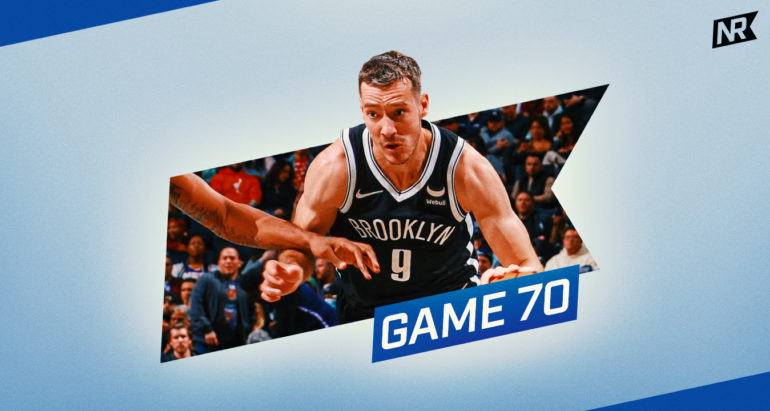 The Nets entered Wednesday night looking to win their fifth straight game with the Mavericks coming to town. Though Dallas has been hot as of late, Brooklyn has put up a handful of brilliant performances as the team has seemed to find its groove. A familiar face put a halt to the winning streak, though, as the Nets showed fatigue at the end of their third game in four days.

Andre Drummond was an absolute menace as the game got underway. The big man racked up eight points and 10 rebounds in just six minutes of action, doing just about everything to start. With a smaller center in Norman Powell on defense, Drummond used his size and strength to score and rebound at will. Kevin Durant and Bruce Brown both made an early impact as well, pushing Brooklyn to a 30-23 lead after one.

It was Goran Dragic’s turn to find a rhythm in the second quarter, dicing up Dallas’ defense on every possession. His presence allowed Brooklyn to weather the storm while Durant rested. Dragic had fourteen points in a flash, keeping the Nets in front by a solid margin.

Despite the impressive efforts, Luka Doncic had his way in the first half, scoring 24 points while creating open looks at-will. Heading into halftime, the Nets led 61-58.

Dallas continued to put pressure on Brooklyn in the third quarter. Durant was double-teamed on practically every possession, which led to some difficulties offensively. The Mavericks seemed to have grabbed hold of the momentum and retook the lead during the frame. However, Brooklyn kept its head in the fight, adjusting to the double teams appropriately. Fueled by Durant and Dragic’s playmaking, the Nets took an 84-72 lead. Despite Dallas using a timeout, the Nets continued to pick apart the double teams and held a 91-79 advantage with twelve minutes left to play.

The fourth quarter, though, told a different story, as Dallas made its surge. After the Nets led by as many as 14 points in the frame, Spencer Dinwiddie and Jalen Brunson came alive at the rim. Dallas took control, slowly suffocating Brooklyn on both ends of the floor. As time wound down, Doncic hit multiple backbreaking fadeaways to keep the Mavericks on top. That was, until Durant knocked down a deep three-pointer to give Brooklyn a 111-110 lead with just ten seconds let.

But the game wasn’t over just yet. Dinwiddie, the former beloved Net, buried a triple as time expired, lifting Dallas to a 113-111 victory on the road. The Nets ultimately failed to capitalize in the fourth period on what would have been a fifth straight victory.

It has felt like an eternity since Brooklyn played consistent team basketball across the board. Between Durant’s injury, James Harden’s efforts (or lack thereof) and Irving’s part-time status, the Nets have struggled to find a groove. That being said, things have changed in March. Durant’s return has played a key role, alongside the team’s overall improvements in players knowing their roles.

Wednesday night’s matchup against Dallas was a perfect example of just that. While Durant did not score 50 points, the team put together an impressive performance that gave them a chance to win, even with missing pieces.

Durant finished with 23 points, six rebounds and 10 assists. Brown racked up a quiet 17 points alongside nine rebounds and five assists of his own. Drummond put up 14 points and 17 rebounds, and Nic Claxton had 13 points, playing excellent defense when his name was called. Dragic was spectacular, scoring 21 points and facilitating at an elite level with and without Durant on the floor. Even Kessler Edwards saw valuable minutes, scoring 12 points after being out of the rotation for several weeks.

It was a heartbreaking loss after the momentum the team has shown as of late, but the Nets put together a near complete effort, minus the fourth quarter breakdowns that left the door open for Dallas. Fatigue likely played a role, considering the team had played in Orlando the night before. Still, the Nets have to find a way to win these important matchups down the stretch, as their playoff aspirations are in the balance. With the Trail Blazers coming up on Friday, Brooklyn has another opportunity to get back in the win column.