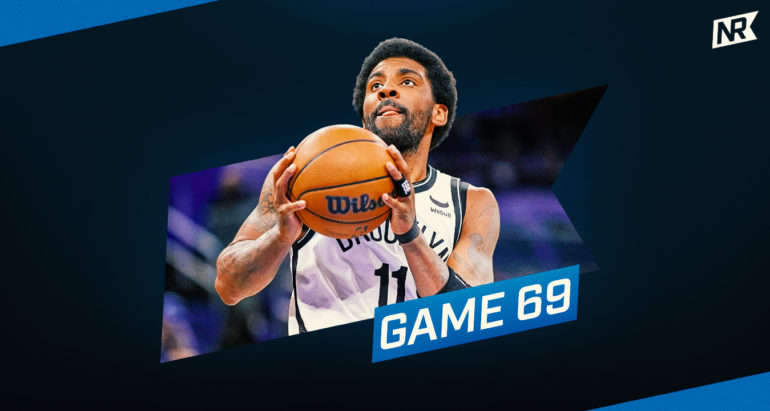 The Brooklyn Nets are streaking. Coming off three straight wins, the Nets looked to continue their streak against the tanking Orlando Magic on Tuesday night. Since this was a road game, star point guard Kyrie Irving was available. Good thing for the Nets, and Nets fans alike, as Irving put on a spectacular show for all to watch. Irving put his artistry on full display as he dropped a career-high and franchise record 60 points in the lopsided 150–108 victory. Irving’s scoring outburst even led to the Orlando crowd giving him a standing ovation and chanting his name.

The first quarter set the tone for the entire game. Irving started his scoring outburst with 16 points on 6/8 shooting, going 4/5 from three. Fellow Nets superstar Kevin Durant also scored 10 points on 4/5 shooting. Both of their hot starts rubbed off on the other players as the team overall shot 74.1 percent with 83.3 percent from three. The Nets set a franchise record 48 points in the first quarter.

The scoring onslaught continued into the second quarter. As it was in the first, the second quarter was the Kyrie Irving magic show. Of the teams 38 quarter points, Irving was responsible for 25. By halftime, Irving had scored 41 points on 14/19 shooting, 6/7 from three. On the back of Irving, the Nets had built a giant 30 point lead with a 86–56 lead.

Irving cooled off slightly in the third quarter, but he still scored 10 points. Orlando started the quarter hot offensively and started to cut into the large deficit. But Durant and Nic Claxton helping Irving with the scoring killed any possible chance for a comeback. The Nets still shot 52 percent from the field and aggressively got to the free throw line. With a full 12 minutes remaining, Brooklyn had already scored 116 points.

The fourth quarter was record time for Irving. With coach Steve Nash subbing Irving back onto the court, the Nets let him work to beat Deron Williams’s franchise record for most points in a single game of 57. Majestically, with a crossover into a pull-up three, Irving broke the record and ended his night with 60 points. The lifelong Nets fan became a part of history forever.

However, there was still eight minutes to go. Both teams emptied the bench as garbage time buckets ensued. As time dwindled, the Nets extended their winning streak to four and put up a season-high 150 points in the victory.

Irving’s artistry on the court en route to his 60 point masterpiece drew the attention of many around the league. Many players and fans alike praised Irving’s skill and ability to score in any way possible. With Irving’s current part-time status, seeing his great ability to play spectacular and efficient basketball was a wonder. At the moment, Irving is on pace to complete a second straight 50/40/90 season.

Amazingly, this is Irving’s second game within a week to score 50 or more points. Better yet, following Durant’s 53 point spectacle on Sunday against the New York Knicks, Irving and Durant became the first pair of teammates to score 50+ points in consecutive games.

The way Irving and Durant have been tearing the league in scoring should bring the Nets so much hope and put the league on notice. Even with current circumstances, the Nets are showing how good they can be. With a locked in Durant and Irving who can score at will in any way possible, defenses will focus on the two superstars. This means several players will be left open, which leads us to…

Even with Irving’s 60 point performance, there was still a big team contribution to the win over the Magic. Outside of the stars in Durant and Irving, the Nets still had five other players score in double digits. Patty Mills scored 15, Nic Claxton scored 12, Kessler Edwards seemingly broke the rookie wall with 14, and both Bruce Brown and Andre Drummond scored with 10.

Though they are role players, the supporting cast excelled in their positions tonight. Brown continued his hounding defense, Mills seemed to break out of his shooting slump, and Drummond and Claxton anchored their defense at the rim. Drummond had one of the more impressive blocks of the Nets season, meeting Magic center Mo Bamba at the apex and rejecting the dunk attempt.

Just like Durant and Irving, the supporting cast hit a groove. With Seth Curry, Cam Thomas, LaMarcus Aldridge, and third star Ben Simmons returning from injury soon, the Nets are going to be able to accomplish more things on the court in pursuit of a title. With Durant and Irving drawing a majority of the attention, the Nets supporting cast has big opportunities to capitalize and support their stars. Depth will always be a key part of a championship team, and the Nets are showing that they are a deep team.

The Nets will have a back-to-back as the team returns to Brooklyn to take on the Dallas Mavericks at Barclays Center. Unfortunately, barring any sudden changes to the vaccine mandate, Kyrie Irving will be unavailable for the game. However, Irving did confirm he will be in the crowd again, just like last Sunday versus the Knicks. Tip-off will be at 7:30 p.m. EST and will be broadcasted on ESPN.

The current four game win streak Brooklyn is on brings their record to 36–33. Unfortunately, the team is still the eighth seed and would still be in the play-in tournament to qualify for the playoffs. Ideally, the Nets would like to keep winning in order to secure a top six seed to guarantee a playoff spot. The Nets are 2.5 games behind the seventh seeded Toronto Raptors and 3.5 games behind the sixth seeded Cleveland Cavaliers. Hopefully, the red hot Nets can continue their consistent winning and momentum to rack up more victories.