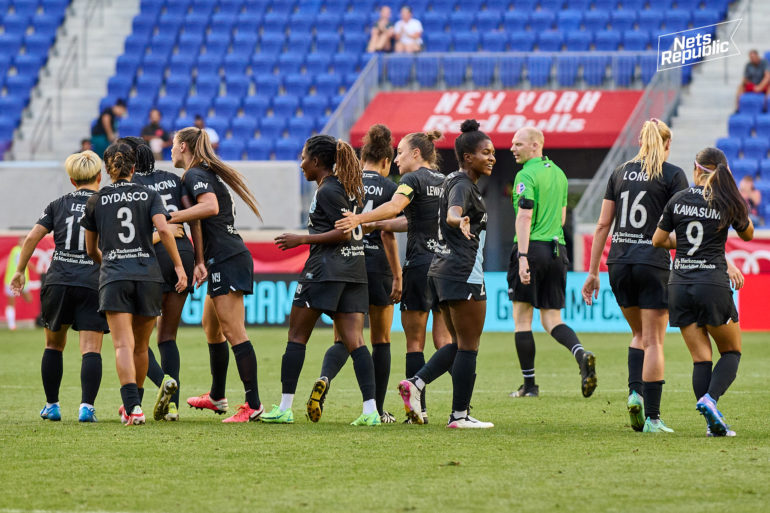 With Algorand Partnership, Gotham FC Explores the Future of Blockchain in Sports

On March 2nd, NJ/NY Gotham FC announced a multi-year partnership with Algorand, which will replace Avaya as the New Jersey/New York’s front-of-jersey sponsor. As part of the deal, Algorand will also become the team’s first-ever “Official Blockchain and NFT Partner,” allowing the team to unveil blockchain-enabled payments and NFT integrations in-stadium and in the community.

The three-year, mid-seven-figure cash deal will be paid out to the club in equal yearly installments over that period. The deal was facilitated by Excel Sports Management’s Properties Division.

A First of its Kind Partnership

Although it might not seem that a women’s soccer team and a blockchain company have much in common, there’s more to it than at first meets the eye.

“The issues and missions on both sides are very much aligned, so it was easy to get to this point and move quickly to start implementing some of our key priorities,” Andrea Pagnanelli told Nets Republic

Gotham FC hopes to capitalize on the momentum stemming from last year’s well-received re-brand, and bringing on Algorand is part of their next steps.

“Algorand and Gotham both want to impact the community off the field, empower women both in blockchain and in sports, and improve the fan experience by implementing Algorand’s award-winning technology, ” Pagnanelli explained.

“It’s important for tech companies to partner with traditional organizations,” Keli Callaghan told Nets Republic. “There is so much opportunity to gain a new edge with tech.”

In addition to sponsoring the front of Gotham’s 2022 kits, Algorand will also help Gotham enhance the fan experience during gameday and beyond. Fans can look forward to a series of in-game NFT giveaways, blockchain scavenger hunts, and blockchain-enabled purchasing for tickets and merchandise, all powered by Algorand’s native digital wallet.

As technology evolves, the companies deploying it are looking to step forward and make an impact in any way they can. As Pagnanelli explained, Algorand believes they can make an impact by stepping forward in sports.

“At Gotham, we can adapt quickly. We’re not the same as other leagues,” Pagnanelli explained. “Because of that, you’ll see us make a big impact. I’m so proud of this deal, and so is Gotham FC.”

From the moment they enter the stadium this season, fans are going to see a difference in their experience. Any way fans decide to interact with the team, be it a community event, gameday watch parties, or social activism, Algorand will be implemented in every seed of what Gotham FC is.

Everything from giveaways to scavenger hunts to blockchain-enabled purchasing at Red Bull Arena is on the table as part of the partnership with Algorand. “What we can guarantee is that for soccer games in the area, Gotham games will feel different,” Pagnanelli said.

Fans can get limited edition NFTs just by showing up for games, win free concessions and get discounted merchandise through the blockchain-enabled scavenger hunts.

But What is Algorand?

Unlike normal consumer goods and household items, understanding the underlying technology of Algorand isn’t easy, but according to Callaghan, this technology can change the way sports work across teams, fanbases, and communities.

As Callaghan explained, the most basic way to understand the concept of Algorand’s technology is to think about it as a way to exchange value quickly and without friction.

“It’s the same way the internet lets information go back and forth,” Callaghan explained. “But the way that value transfers between two people is still full of friction.”

As an example of that friction, Callaghan pointed to money transfers between individuals which typically require either a physical currency, a bank where the institutions facilitating the transfer take on risk, or a wire transfer which costs money and takes time.

The use of blockchain technology makes value transfers more accessible compared to more traditional mechanisms like a wire transfer where a bank might charge a fee while also requiring a minimum transfer amount.

Algorand is a company that touts a commitment to sustainability, an issue at the forefront of the conversations on cryptocurrency and NFTs.

Callaghan is aware that the blockchain and cryptocurrency industry sometimes gets a bad reputation, but explained that blockchain is not going away any time soon. In fact, this technology is already providing real value to economies and is gaining traction all around the world, especially outside of the United States.

“If you look at the growth that it’s seen in a short amount of time and the actual substantial use cases where people are able to benefit – whether you’re a person that doesn’t have access to a bank account in another country, or you’re avoiding currency fluctuation in Latin American countries where the inflation has skyrocketed and you need an alternative – blockchain and crypto are providing actual real value to economics right now,” she said.

Callaghan also believes that there are some misconceptions regarding the environmental impact of blockchain technology.

Where some of the earlier generations like Bitcoin and Ethereum utilize significant amounts of energy, second and third-generation alternatives like Algorand are focused on the sustainability aspect of their technology.

In fact, the founder of Algorand, Silvio Micali, saw that those early generations were flawed, and rebuilt Algorand from the ground up to be sustainable, scalable, less expensive, and more inclusive.

According to Leafscore, a website that aims to help consumers make climate-friendly purchasing decisions, Algorand ranks among the most sustainable cryptocurrencies. As the site explains, Algorand does not involve mining and is fully carbon-neutral thanks to a partnership with ClimateTrade which was announced in April 2021.

“If you look at Bitcoin versus Algorand, we use 200 million times less energy,” Callaghan explained. “At Algorand, we take it very seriously. We were the first blockchain to go carbon negative.”

Gotham FC and Algorand are also planning to collaborate on several sustainability-focused community initiatives. One such initiative is hosting recycled soccer equipment drives at Soccer Post locations throughout New Jersey and New York to benefit the MORE Foundation Group and its One Million Tree project in Ghana.

For both Pagnanelli and Callaghan, sustainability is at the core of their own personal values.

“Community events are at the core of this deal, like partnering with the MORE Foundation Group to recycle used equipment,” Pagnanelli explained. “Sustainability is at the core of Algorand.”

An Investment in Women and For the Future

For Gotham FC, this three-year, mid-seven-figure cash deal sets up the future growth of the club in an historic way.

“It will help us streamline our business operations,” Pagnanelli said. “We have very lofty goals for the front office and soccer operations of this club, and we have plans in place to help us get there.”

For Pagnanelli and the Gotham FC front office, it’s not just about them. “It’s ensuring that we’re making the voices of our players louder,” she explained.

With the NWSL about to enter its 10th year, Pagnanelli expects the league to continue to grow exponentially. “We’re excited to be part of that and be the gold standard of clubs in the league,” she said. “We’ll be the proof every day.”

For Callaghan and Algorand, it is equally as important to partner with organizations that support women and women’s initiatives. Partnering with Gotham FC will allow Algorand to expose the NJ/NY market to their technology and push the envelope of what blockchain can do in the sports industry with a partner who wants to embrace new tech and do things in a unique, compelling way.

“We are so glad that Gotham FC was open to partnering with us. We want a deeper relationship, not just here’s some money and here’s the logo,” Callaghan explained. “It’s about the partnership.”

Blockchain technology and women’s sports are not exactly synonyms, but for Gotham FC, the team thinks it is time that companies stop sleeping on women’s soccer. And Algorand has heeded the call. In fact, the young fan base in women’s soccer was part of the appeal of partnering with the NWSL team.

“This partnership makes absolute sense!” Callaghan said. “It’s absolutely in our best interest to make sure we’re educating the younger generation that will be native to blockchain, especially young women and girls, who can understand this and go on to have careers in STEM.”

“Why women’s soccer? Because we can move quicker,” Pagnanelli explained. “A partnership of this magnitude at a different club could take years, but we can be nimble and bring it to fans. We can be a case study and then be that gold standard in a way that is efficient.”

As part of the process, Callaghan came and spoke with the Gotham FC Players Council on what NFTs are and what this deal means to them.

Callaghan was excited to see their interest in blockchain and how they could leverage it in their own lives and careers. “It was great – there are really smart, powerful, and inspiring women on the team,” she said. “It’s great to see them have a genuine interest in innovative technology like blockchain.”