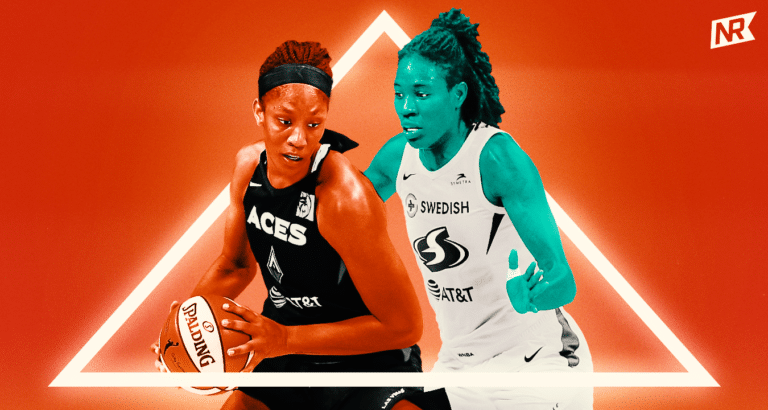 The New York Liberty Have a New Defensive Identity

This off-season, the New York Liberty have pulled off one of the most dynamic retoolings in recent WNBA history. Following up the signing of 2020 Most Improved Player Betnijah Laney, the Liberty acquired Natasha Howard from the Seattle Storm in a sign-and-trade, sending their #1 overall pick in the 2021 draft to the Storm, alongside several other picks. The Liberty have transformed their identity this off-season, and nowhere is this truer than on the defensive end.

Last season, the Liberty struggled on the defensive end. New York was in the bottom third of the league in defensive rating, allowing opponent offenses 104.5 points per 100 possessions. In particular, as a team, the 2020 Liberty had trouble guarding the pick and roll, stopping transition plays, interrupting passes, and defending the painted area.

After acquiring Laney, a member of the 2020 All-Defensive Team, and Howard, the 2019 Defensive Player of the Year, the defense has quickly gone from a liability for New York to one of their strengths. “We can do more things defensively now,” New York Liberty head coach Walt Hopkins told Nets Republic, “We can turn up the heat a bit, and all of that has to do with the players who we’ve brought in.” Let’s take a closer look at how those players make the Liberty better in a few specific defensive areas:

The New York Liberty struggled last year in defending transition play, allowing 1.065 points per possession off of transition, eighth in the league per Synergy. Even more worrying is the Liberty allowing 19.1 points per game off of turnovers, the worst mark in the league. While the other team is naturally going to get some transition opportunities, New York became a target on transition, giving opponents too many easy looks off turnovers and failing to stop them on the fast break.

Betnijah Laney should do a lot to help mitigate the threat of scoring off of turnovers just by reducing the Liberty’s turnovers. Laney brings another ball handler to an offense that was at times stagnant and easy to exploit last season. Between Laney and other playmakers returning to the team like Marine Johannes, Layshia Clarendon, and Sabrina Ionescu, the offense should have more structure, and fewer turnovers. When turnovers and other transition scenarios do happen, Betnijah Laney also gives the Liberty a skilled on-ball defensive presence to help fortify their transition D.

In Natasha Howard, the Liberty acquire a player who, for the past three seasons, served as an anchor for one of the best defenses in the WNBA. The Seattle Storm defended transition plays better than any other team in the league last season, allowing only .978 points per possession on such plays. Of course, Howard isn’t totally responsible for the Storm’s success defending in transition–but she does deserve a lot of credit for it. Adding Howard makes New York’s transition defense better immediately, and hopefully, her energy defending in transition will set an example for the rest of the team.

On top of helping the Liberty defend in transition, both Howard and Laney project to create much-needed transition opportunities with their ability to generate steals. Last season, New York couldn’t do much to force their opponents to make mistakes, ranking second to last in the league both in steals per game (6.3) and opponent turnovers per game (12.4).

In Laney and Howard, the Liberty addresses this by adding two players who ranked in the top 10 in steals per game last season. As fellow Nets Republic writer Justin Carter pointed out in his recent film analysis of Natasha Howard, Howard has “elite-level anticipation…able to track the ball and jump the passing lane, leading to the steal.”

The exact same thing is true of Betnijah Laney–she’s a player with sharp eyes and quick hands, no pass is safe from her. Both Howard and Laney furthermore are very talented at turning defense into offense off their steals, with a swift bucket or a well-placed pass. Check out this play, where Laney plucks off a loose ball for the steal before finding an open Chennedy Carter at the bucket.

“I love playing defense,” Natasha Howard told Nets Republic, “I love getting under people’s skin and making them uncomfortable.” In Howard, and in Laney, the Liberty get two defenders who, as Howard says, love making opponent offenses uncomfortable. Together, they’ll form one of the most disruptive defensive duos in the league.

Defending the pick and roll

Last season, the New York Liberty were one of the worst teams in the league at defending one of the most common plays in basketball: the pick and roll. As a team, the Liberty allowed .987 points per possession when defending the ball handler in the pick and roll, the second to worst mark in the league. Getting caught on screens and allowing ball handlers to get open shots and drives, it was way too easy to shake the Liberty’s perimeter D last season.

Luckily for New York, they’ve just picked up one of the league’s best pick and roll guarding wings in the league in Betnijah Laney. Laney was stellar at guarding the ball handler off pick plays last year, allowing only 55 points on 77 possessions guarded (84th percentile), or put another way, holding her defensive mark to only 33% shooting on pick and roll plays. Laney is adept at navigating screens and staying in front of opposing ball handlers, and brings a much needed counter to the pick and roll to Brooklyn.

A young, small team, the New York Liberty were often taken advantage of in the post last season, allowing 40.9 points in the painted area per game, the fifth-most in the league. New York was particularly vulnerable to post-up plays, allowing their opponents to score 1.063 points per possession on post-ups, bottoming out the WNBA in defending such looks. While center Kiah Stokes offered some resistance to this punishing barrage of post-ups, it was abundantly clear that the Liberty needed more help guarding the low post.

Natasha Howard brings just the defensive deterrent that New York has needed in the paint. The former Defensive Player of the Year allowed just .667 points per possession on post-ups with the Storm last season, holding players to just 26.9% on post-up plays. Howard is one of the most skilled post defenders in the league, exerting her will in the post and making life difficult for offenses. She is exactly the paint presence&nbsp; that the Liberty needed to get their defense in line.

Natasha Howard and Betnijah Laney’s skillsets address the shortcomings of this New York Liberty team’s defense perfectly, fitting in on D like two puzzle pieces. Laney and Howard bring a firm defensive structure to New York, the kind of foundation that, along with a solid offensive system, you can build a contender on. It’s going to be a fun season for the New York Liberty.

All stats courtesy of stats.WNBA.com and Synergy Sports.