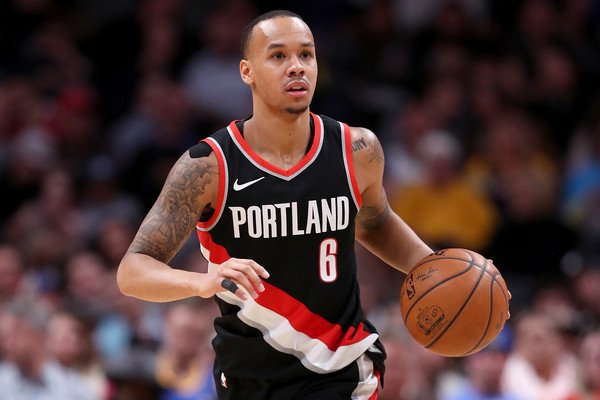 Shabazz Napier And What His Role Could Be In Brooklyn

Coming out of UConn, Shabazz Napier was the talk of the NBA, a player who didn’t have the top-end upside that would make him a lottery pick, but someone with the skills to run an NBA offense. LeBron James famously talked Napier up so much that the Miami Heat traded for him after he was drafted by Charlotte in hopes that it would keep James in Miami.

Napier spent the past two seasons as a Trail Blazer and is coming off his best NBA season, posting career-highs in points per game, field goal percentage, three-point field goal percentage, and a whole host of other things. Now, after leaving a role where he was pretty solidly established as the third guard behind Damian Lillard and C.J. McCollum, he comes to a much less clear situation in Brooklyn. What can we expect to see from Napier this year?

Where This Backcourt Is At

Before we look at what Napier can do in Brooklyn, let’s try to figure out where he fits in with what Brooklyn already has. Per Jacob Goldstein’s position estimates, Napier played 100% of his minutes at the point last season. Thankfully, he played with a point guard, Damian Lillard, who could also operate effectively at the two, and in the 580 minutes that the two of them shared on the court, the Blazers had a luck adjusted net rating of 2.5. That number is better than Portland’s net rating was with either player on the court without the other or in situations where both players were off court.

What does all this mean? Pairing Napier with a strong shooter in the backcourt can be an extremely effective way of playing basketball.

Here’s the list of players who can see minutes at one of the guard spots this year for the Nets, with their 2017-2018 season positional breakdowns:

A few quick notes about those numbers and their relationship to Napier:

First, the positional breakdown suggests we won’t see much of Dinwiddie and Napier together in the backcourt seeing as neither player played the two last season. If they do share the court, it would make more sense to have the ball in Dinwiddie’s hands.

The addition of Napier and the logjam that creates at the guard spots probably means LeVert’s 14.4% mark at the two needs to go down. The problem, especially for Napier? LeVert is a good passer — check out this video breakdown of his passing from Nicholas LeTourneau — and head coach Kenny Atkinson has said that LeVert could see some run at the point this season.

If LeVert is going to play at the one occasionally, and if Dinwiddie and Napier are best suited to that spot as well, that leaves D’Angelo Russell as a major question mark. His best position seems to, umm, also be the point. Someone will have to be Allen Crabbe’s main backup at the two. The two-man combination of Russell and Crabbe had a negative net rating last year, but it was a much better negative net rating than the two-man combination of Russell and Dinwiddie had, so it makes sense to use Russell at the point based on the team’s personnel and the poor fit of lineups featuring him and Dinwiddie.

So, we’re back to Napier. Where does he fit in? Maybe Atkinson needs to deploy him differently than he’s been used in the past.

Positions are mostly dumb, but recognizing which players need to be initiating the offense and which can thrive off the ball is still important, and Napier’s shooting ability suggests he’ll be a better choice off-ball than Russell or Dinwiddie.

Per Synergy, Napier ranked in the 76th percentile last season on spot ups. He shot 37.6% from deep. Napier is just 6’1’’, but he’s not a major defensive liability. NBA.com’s on/off data has Portland with a slightly better defensive rating last season when Napier was on the court. Couple that with D’Angelo Russell’s underrated abilities as a defender — shouts to another article from this very website, which you should definitely be reading if you care about the Nets — and a Russell/Napier backcourt pairing might be workable on that end. That pairing is predicted to have a slightly better defensive rating than lineups with Russell and Crabbe do.

Putting Napier off the ball with Russell at the point allows Napier to focus his offensive attention on shooting. Napier’s best play types last season, with his percentile score in each:

and his least efficient:

Brooklyn probably wants to get the ball out of Napier’s hands. It definitely doesn’t want him ISOing. But spotting up? Shooting off the handoff? These are things that Napier can excel at with the Nets, increasing the upside of the team offensively.

If you want the TLDR version of all of this, here it is: Shabazz Napier has spent almost all of his NBA career playing the point, but the Nets have a crowded group at the one with D’Angelo Russell, Spencer Dinwiddie, and the rumors that Caris LeVert will see time at the position as well. There’s a bit of a void behind Allen Crabbe at the two, though, and Napier’s shown enough as a spot up shooter to suggest that the Nets can play him off the ball this year as a backup to Crabbe. It will help keep him away from his less efficient play types and let him focus on becoming an even better shooter.