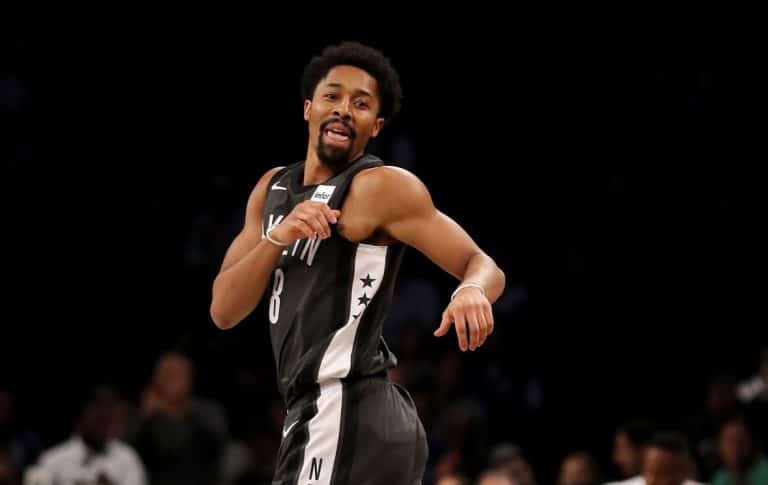 Spencer Dinwiddie had a breakout season in 2017-18, finishing 3rd in Most Improved Player voting and leading the Nets on many occasions to some clutch wins. Not many foresaw the elevated play of the guard who in the absence of D’Angelo Russell due to injury was a standout for Brooklyn.

The numbers were great, career highs across the board (12.6 PPG, 6.6 APG, 3.2 RPB) but his efficiency was lacking in terms of his shooting overall. Only once did he shoot above 40% across a monthly period, per Basketball-Reference:

Of players that had more than 800 shots last season, Dinwiddie finished last in field goal percentage (38.7%). He was one of only three players to finish with a field goal percentage of less than 40% with that many shots. The other two coincidentally were point guards – Terry Rozier and rookie Dennis Smith Jr. Of the 80 games, Spencer played he shoots 45% or greater from the floor only 25 times.

The Nets point guard has made it a goal of his next season to become a more productive scorer, telling NBA.com,

“Scoring efficiency is the main area of improvement.”

If Dinwiddie can make that a reality he has every chance to take his game to the next level. Depending on his role he could even be a 6th Man of the Year contender.

With the current iteration of the Nets roster, it’s unlikely he’ll start ahead of the likes of D’Angelo Russell, Allen Crabbe or even Caris LeVert. That means a likely role heading the second unit. Dinwiddie did start 58 of his 80 games last season but the injury and inconsistency of D’Angelo reason was the main reason for that.

Brooklyn’s 2nd most used lineup in terms of minutes featured both Spencer and D’Angelo (Allen, Carroll, Crabbe, Dinwiddie, Russell). That lineup had an offensive rating of 111.1 which in comparison would’ve ranked as the third best offense in the league overall.

This sort of synergy and unselfishness between the pair bodes well going forward.

The defense, on the other hand, wasn’t as impressive. The 109.1 defensive rating would’ve ranked as the equal 3rd worst in the association.

When it came to 2-man lineups, Dinwiddie and Russell spent 353 minutes together on the court. Their offense and defense weren’t anything to write home about. The offensive rating of 107 ranked on par with the Charlotte Hornets who were 13th in that area last season. The offense might have been average but the defense was flat out horrible. The Phoenix Suns finished with the worst defense last season (110.6) while the Dinwiddie/Russell combination combined for a miserable 118 rating.

The takeaway from all that is with the right players around them Spencer and D’Lo can work well. As a duo, however, they simply don’t. If Dinwiddie controls the reserve unit he’ll still likely spend portions of time with the starting unit. His success alongside them and Russell, in particular, could go a long way to determining his success in 2018-19.

While the scoring efficiency is an area of improvement for Dinwiddie (and will be a huge area for him being in the 6th Man of the Year race), his passing is not an issue whatsoever. It’s well known his prowess on that facet of the floor (2017/18: 7th in total assists, 9th in assist percentage, 2nd in assist to turnover ratio) and could elevate him above fellow pure scorers who are generally in the running for the award.

These sort of passes in the pick and roll aren’t the easiest yet the control and timing of Dinwiddie is second to none.

Such plays are what put im in a separate tier from fellow 6th MOTY contenders.

Here’s a comparison of the last 10 6th Man of the Year winners and their points and assists in comparison to Dinwiddie’s numbers last season.

Outside of Lou Williams last season there were no great passers on that list. The offense ran very heavily through him last season for the Clippers, especially with the absence of Milos Teodosic and Patrick Beverley for significant parts of the season.

Looking at those numbers Dinwiddie will have to take a minor jump in the scoring department to be in the 6th MOTY race. That could easily happen if his 3-point and field goal percentage take a minor improvement. If he made just 28 more shots from the field last season that 38.9% number goes up to a far more respectable 42%. As for the perimeter shooting, an extra 10 3-pointers would increase his percentage from 32.6% to 35%. That’s completely in the realms of possibility, especially with performances like this.

Such efficient nights combined with a better chemistry with D’Lo could lead to Dinwiddie being in the running for yet another postseason award.