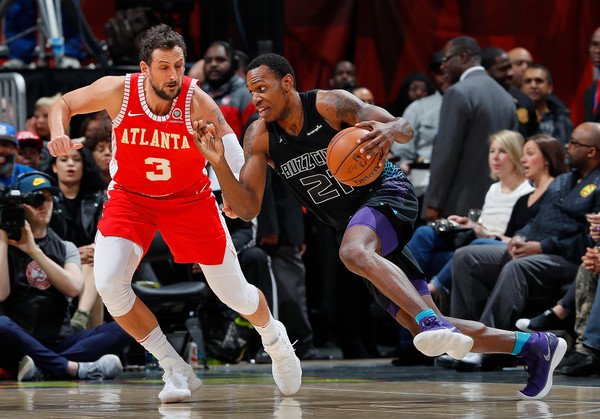 Why Treveon Graham Is Due For A Big Year In Brooklyn

Treveon Graham is a player that probably doesn’t move the needle for a lot of people that watch the NBA. He went undrafted out of VCU in 2015, spent a majority of his first professional season in the D-League with the then Idaho Stampede, and after a good showing in at the 2016 Summer League he was signed by Charlotte to bolster the bench.

Graham played sparingly in Charlotte over his two seasons. Last season, he played a little over 16 minutes while averaging 4.3 points, 1.9 rebounds, 0.9 assists, and 0.5 steals while shooting 43.4 percent from the floor and 41.2 percent from deep.

At season’s end, Charlotte declined a qualifying offer to him and made him an unrestricted free agent. Almost a month later, Brooklyn scooped him up off the market much to the surprise of analysts and fans alike.

Why would Sean Marks take a flyer on someone that appears to offer so little? Because he fits Kenny Atkinson’s system perfectly.

Since Kenny Atkinson took over as head coach in Brooklyn, the Nets have taken the most spot up shot attempts in the league by a longshot. In his first season as head coach, they didn’t hit a lot of them. Last season that changed after Brooklyn got some personnel that fit the system better like Allen Crabbe. In addition to that, Brooklyn likes to run in transition and use their ball handling guards as scorers out of the pick-and-roll.

Treveon Graham just happens to do all of this.

According to Synergy Sports Technology, nearly 50 percent of Graham’s shot attempts are spot up shots. He is pretty good at making this shot, scoring 1.007 points per possession while scoring 41 percent of the time. Graham clearly made the most out of his time as a shooter in Charlotte.

One thing that strikes me on these shot attempts is how open he is on a majority of them. Graham is either moving around a lot before each shot or benefitting from defenses collapsing into the lane to deal with the dribble penetration from Charlotte’s guards and their bigs posting up.

This is exactly how Brooklyn has taken advantage of defenses too. D’Angelo Russell and Caris LeVert are always penetrating defenses and passing out to the perimeter, creating open looks. In addition to that, Brooklyn’s offense is predicated on a lot of movement so Graham should be able to take advantage of a system that he can thrive in.

What Treveon Graham might do better than shoot spot-up attempts is get out in transition. Transition scoring accounted for almost 16 percent of his total output and he was very efficient. He ranks in the 96th percentile in Synergy’s system, scored 1.442 PPP, and over 62 percent of the time whenever he was running in transition. What makes Graham even more tempting for Brooklyn — a team that struggles scoring in transition despite how they push the pace — was how he shot it from deep in transition.

Brooklyn ranked dead last in the NBA in transition points per possession, only scoring 1.002 PPP and shooting a little over 45 percent from the floor in transition. Graham is someone that could come in off the bench and be a much more reliable and efficient contributor than options in years past.

Treveon Graham isn’t someone that is going to come in and play significant minutes, especially with all the options Brooklyn now has on the wing and frontcourt but he is going to be an upgrade over players like Quincy Acy and fill the hole in the roster than Dante Cunningham left.

Acy was someone that shot a high volume of shots from deep but didn’t hit very many of them and ended up almost shooting the team out of contention of some games when the starters left the floor. Cunningham came in halfway through the season, provided some much-needed depth, offered things like shooting and rebounding to a team that wasn’t getting either from the bench bigs but is now in San Antonio. Graham has a chance to fill the role Acy originally occupied and Cunningham eventually took from him.

Under Kenny Atkinson, Brooklyn has been known as a place players can come in, develop their game, and leave looking much better than when they got there.

Guys like Sean Kilpatrick, Quincy Acy, and Spencer Dinwiddie were in the G-League before getting to Brooklyn and have all had NBA success since joining and in some cases leaving the Nets. Brook Lopez famously developed a reliable three-point shot that served him in Brooklyn, Los Angeles, and now Milwaukee. DeMarre Carroll has reinvigorated his career after a subpar showing in Toronto. Dante Cunningham looks like someone that could be a key rotational piece in San Antonio after spending half a season in Brooklyn.

Treveon Graham could see a similar jump this season too in a system that fits him and with a coach that can mold him into the best version of himself. Expect Graham to be someone that averages between 18 and 20 minutes per game and play multiple positions. He is someone that is skilled enough to play the two or three but also someone tall enough to play the four in some lineups. As Brooklyn’s rookies adjust to like in the NBA and Kenny Atkinson tries to find a good balance between all the new pieces, Graham is someone that could find his way into the 8-9 man rotation early in the season.