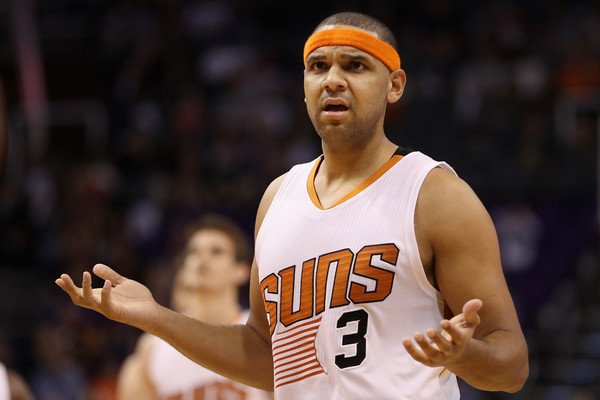 Does Jared Dudley Have Anything Left?

Did you know that the Nets traded for Jared Dudley back in July? While the main thing Brooklyn got out of that trade was a 2021 second round pick, Dudley was still technically part of it. He’s still on the Nets roster. He could conceivably see the court at some points during the season.

Dudley’s 2017-2018 numbers weren’t good. Playing a career-low 14.3 minutes per game, Dudley averaged 3.2 points per game with a field goal percentage under 40%. He shot 36.3% from three on 1.7 attempts per game, but the once versatile Dudley appears to be past his prime and not someone who’ll contribute in Brooklyn this season.

Is that assertion true, though? Can Dudley bring anything to the table, or will he stay glued to the Nets bench?

Let’s answer the second half of that question first. Dudley will very likely spend most of his time on the Nets bench. Sure, he’s just a couple years removed from starting 41 games for the Wizards, but Dudley, who played everywhere from the two through the four early in his career, has seen his skills regress at this point and is essentially a stretch four whose only real contribution is shooting threes. There’s not really any room in the current Nets rotation for a guy like Dudley, as Rondae Hollis-Jefferson will start at the four, Ed Davis and Kenneth Faried represent more traditional bigs who can back up the position, and DeMarre Carroll will likely see a lot of run at the position as well. If Dudley ends up playing, things haven’t gone the way Brooklyn expected.

But hey! Here at Nets Republic, we want our readers to be informed about any possible situation. If injuries hit and Dudley ends up playing a reserve role on this team, what will that look like? How bad will things get? Does he still have something left? Let’s find out.

What Jared Dudley Can Still Do

I don’t want to be overly negative here when talking about Dudley. I like him. He was a good NBA player for a few years and you’re going to be able to find plenty of people talking about the flaws in his game. Dudley has definitely regressed over the years, but there are still things he can do to contribute with Brooklyn this year in the (likely) limited time he’ll spend on the court.

Dudley can bring spacing to the floor at the four spot. A 36.3 percent shooter from three last year and a career 39.6 percent shooter from deep, Dudley’s able to help bring spacing to some lineups that need it. Spencer Dinwiddie, D’Angelo Russell, and Rondae Hollis-Jefferson all shot below 33 percent last year. In lineups that will feature both Dinwiddie and Russell this, Brooklyn will need to increase the spacing frontcourt court to open things up. Having two of DeMarre Carroll, Allen Crabbe, and Jared Dudley in the game with those two at the guard spots helps to open up the offense. While Dudley had the worst defensive rating of those three players last season and should be the last choice for minutes in those lineups, he can still give Brooklyn decent spot minutes.

Let’s start with a clip that isn’t Dudley shooting a three. In one of his best games last season against the Heat in November, was playing in a lineup with Dragan Bender at center. But this lineup is essentially a five-out lineup on the offensive end, with the five (Bender) and the four (Dudley) operate on the perimeter. Dudley does a good job coming in from the wing as Bender releases, grabs the offensive board, and puts the ball back in the hoop. Here’s another play from the Bender/Dudley front court pairing:

Dudley comes in down the baseline and makes a good pass to Bender for the assist. I saw a lot I liked in that Dudley and Bender pairing from the tape of the Heat game, especially on the offensive end, so I turned to Jacob Goldstein’s teammate on/off data to see if the numbers backed up what I was seeing.

The defense is obviously an issue there. That’ll happen when you have a player who hasn’t unlocked his defensive potential (Bender) and a player who, at age 33, is past the point of being able to bring consistent defense to the table (Dudley), but the offensive rating for the Suns with the two of them on the floor is much higher than it was in situations where one or neither was on the floor. While the pairing played just 409 possessions, there’s enough there for me to wonder if there’s a good way to replicate that offensive success for the Nets. Could Dudley see time at the five with DeMarre Carroll at the four, allowing the team to play this five out offense? Dudley shot 47.1 percent on corner threes last year. Carroll shot 40.8 percent from the corner. I’m guessing a front court with those two would look pretty rough defensively, but Carroll, coming off his best rebounding season, and Dudley, who isn’t a slouch on the boards, could do enough on the offensive glass to make these lineups work. Maybe?

I’m obviously not sold on that idea because it would hurt defensively a lot more than just running Ed Davis or Kenneth Faried at the five would, but it’s an option that could produce above-average offensive results.

The other thing Dudley can still bring is high-level shooting in more tradtional lineups. Again, he shot 47.1 percent on corner threes last year. Putting him in the corner and not asking him to worry about things like playmaking can give the Nets something they don’t really get elsewhere on the roster. Of the players expected to play a role in this rotation, Dudley’s corner three shooting percentage is by far the highest, with Carroll’s mark ranking third (and new addition Shabazz Napier ranking second at 41.2 percent, though only 15.6 percent three-pointe point attempts came from the corner as opposed to 21.3 percent of Dudley’s.)

I’m not sure about the rest of y’all, but I’ve been worried about the Nets shooting this year. At his best, Jared Dudley alleviates some of those concerns, even if it’s just for a few minutes per game. I understand that the ideal place for him on the floor offensively makes him tough to play on the other end, but there will be spurts during the season where having a shooter as capable as Dudley comes in really, really handy.