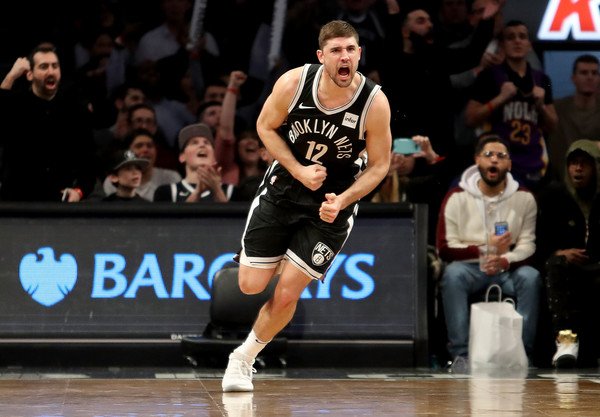 Joe Harris had an impressive 2017-18 campaign and positioned himself for an even better season next year.

If you know the story of Joe Harris, you know he is a hard worker. The man would eat a basketball for breakfast if it would give him some sort of basketball superpowers.

As a kid, Harris would sleep with a basketball until he was a senior in high school. He also covered his walls in quotes from famous NBA players and coaches and listed out his goals, one of those being to “reach the NBA.”

Though it may have started rough, Harris is living his dream and playing for a team in the NBA. Not only is he playing, but he is lighting it up as a shooter for the Brooklyn Nets.

The first thing you notice when you watch Joe Harris play is how incredibly accurate he is from deep. If he’s good at nothing else, at least the Nets have a consistent player who can hit it from deep and keep the defense honest.

Last season, he shot an outstanding 42 percent from deep. And looking at his shot chart, Harris was most impressive from the top of the key where he connected roughly 46 percent of the time. One issue is that right corner, Harris has trouble connecting from there, but throughout the whole season, he only attempted 35 shots from the corner, so unless he improved on that spot in the offseason, don’t expect a whole lot of corner three’s from Harris.

Yes, Joe Harris has a true shooting percentage of 63. You did not read that incorrectly.

In terms of non-big men in the NBA, Joe Harris had the 2nd highest TS% in the league, behind the one and only Stephen Curry, who is an anomaly. The 3rd highest is Kevin Durant (63 percent) and Joe Ingles (62 percent) is the fourth highest.

I don’t know of a better way to describe this than a feel-good story. When you watch Harris play, you can’t help but imagine the little 10-year-old inside of him freaking out when he nails a three from deep. It’s an instant mood booster, especially when you’ll be seeing him knock down game winners for Brooklyn.

Though the shooting is great from Harris, he does have glaring holes in his game. His defense is not up to par and he is not a creator for his teammates. But, he does play the role of JJ Redick very well for the Nets.

Harris will need to improve his defense if he wants to eclipse the 25-minute mark of playing time. But, as it sits right now, the Nets have a great young stud who can be crafted and molded into a fantastic 3-and-D player.

If the ceiling of Harris is JJ Redick, then Brooklyn landed a great guy and he is an absolute steal at $16 million for two years.