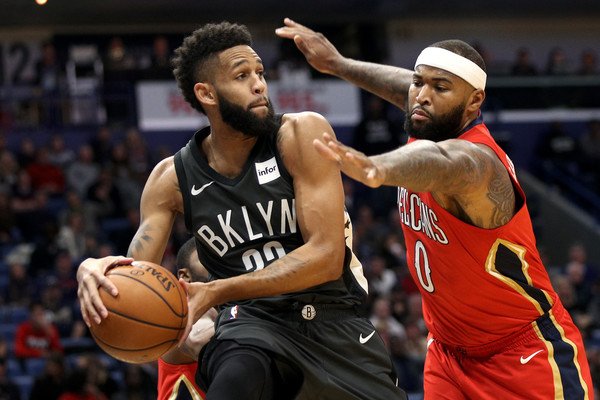 Player Profile: Allen Crabbe Will Lead the Charge From Deep

Brooklyn took a second stab at Allen Crabbe and landed him last summer. Now, Crabbe looks to continue his improvement and carry Brooklyn to a playoff spot.

Allen Crabbe had a deja vu experience when he signed a deal to play in Brooklyn for the 2016 NBA campaign. But, he was a restricted free agent, so the Portland Trailblazers were able to snatch him away from the Nets by matching his offer sheet. Then, not a year later, Crabbe finds himself exactly where he was supposed to be, in Brooklyn as the secondary face of a franchise in the midst of a colossal rebuild.

After Crabbe’s deja vu became a reality, Brooklyn’s numbers jumped in all three categories. Their three-point percentage rose from 34 to 36 percent, their three-pointers per game moved from 6th to 2nd (12.7), and the attempts bumped from 4th to 2nd (35.7).

Before Allen Crabbe came to Brooklyn, the highest number of three-pointers attempted per game was 5.2, and that number belonged to Brook Lopez. Fast forward one year, and Crabbe is attempting 7.1 three’s a game. And even with his high volume, he’s converting on 38 percent of his shots, two percentage points higher than the team average.

Another note: Crabbe has the highest three-point percentage on the team among those taking more than three shot from deep, with the exception of Joe Harris who I’m excluding right now because this is a Crabbe profile, ya feel?

First off, we’re excluding Jeremey Lin and Jacob Wiley. They played a combined total of six games last season, so they are out of the equation. Next is Joe Harris. This man is beast from deep and he deserves to have his spot over Crabbe. Long live Joe Harris.

After Harris, we have Nik Stauskaus, Isaiah Whitehead, Tyler Zeller, and Dante Cunningham. All of these players have less than three deep shots a game, so they’re all eliminated.

Then we have Crabbe: the man who is resurrecting the Brooklyn three-pointer.

The one issue, and it’s a big one, I have with Crabbe is the fact that he can do one thing, and only one thing. Sure, he’s a great shooter and is a blessing to have on the floor, but he is not great on the defensive end of the floor, he’s not a facilitator, and doesn’t help to create open shots. But, he doesn’t need to.

The lineup that he plays with centers D’Angelo Russell as the playmaker of the unit. So, Allen doesn’t need to worry about creating shots or helping his teammates with shots because that’s Russell’s job. Allen is paid to go and shoot lights out every night.

If he fails to do that, then there’s a problem.

With that, I leave you with Allen Crabbe dropping 41 points on his birthday.