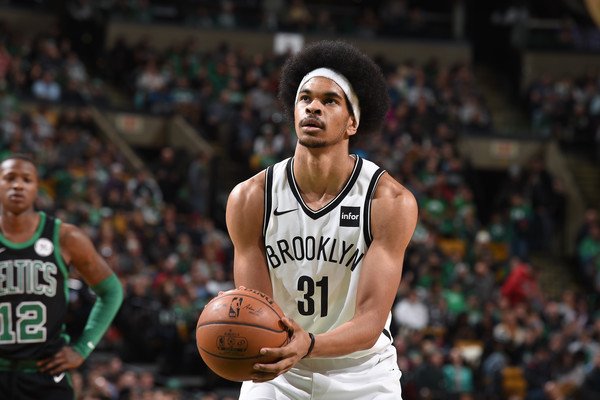 Player Profile: Jarrett Allen is Ready To Make the Next Jump

Jarrett Allen jumped into the league with high expectations but did not shine like the other rookies in his class. This is the year that Allen will prove why he belongs in Brooklyn.

Jarrett Allen, the 6-foot-10 center from the University of Texas entered the NBA a little under the radar. He had a decent season with UT, scoring 13.4 points and snagging 8.4 rebounds per game (per 100 possessions, Allen scores 24.3 and collects 15.3 rebounds). His performance throughout the season garnered national attention, and though he was not as tenacious as some of the players taken before him in the draft, he was exactly what the Brooklyn Nets needed at pick number 22.

Now, with a year under his belt, Jarrett Allen will take the most of all his opportunities this year (and Brooklyn needs him to). With the only other center on the roster being Kenneth Faried, the Nets need Allen to stay on top of his development to keep progressing into the beast he is supposed to be.

The only problem? When Allen first entered the league he had a difficult time setting solid screens and being physical down low.

But last year, Allen kept improving on his weak points and showed the coaching staff he is the perfect fit for pick and rolls. Just look at this simple give and go with Caris LeVert.

Jarrett Allen gets the ball around the 3-point line, checks to find if his cutter, Spencer Dinwiddie is open, and when he sees the passing lane is closed he dribbles out to LeVert and gives the handoff. Allen then quickly sets the screen on Josh Richardson and LeVert drives to the hoop. Allen then finds the hole in the defense and catches the ‘oop from LeVert for the slam.
While there are many good things to say about Jarrett Allen, he still has his deficiencies. Every now and then he still has a mental lapse on defense or loses sight of the offensive play, but he is a young player. As he starts to have more in-game reps and puts more work in the gym, those small mistakes will start to disappear.
Speaking of time in the gym, Allen has supposedly been in the gym quite a bit this offseason. Sean Marks said during a press conference that he and LeVert have been there “since the season was over.” That’s good news for Nets fans because Allen is proving he wants to continue his growth.
As a potential cornerstone for the franchise, Allen has a long way to go, but his growth is fun to watch.