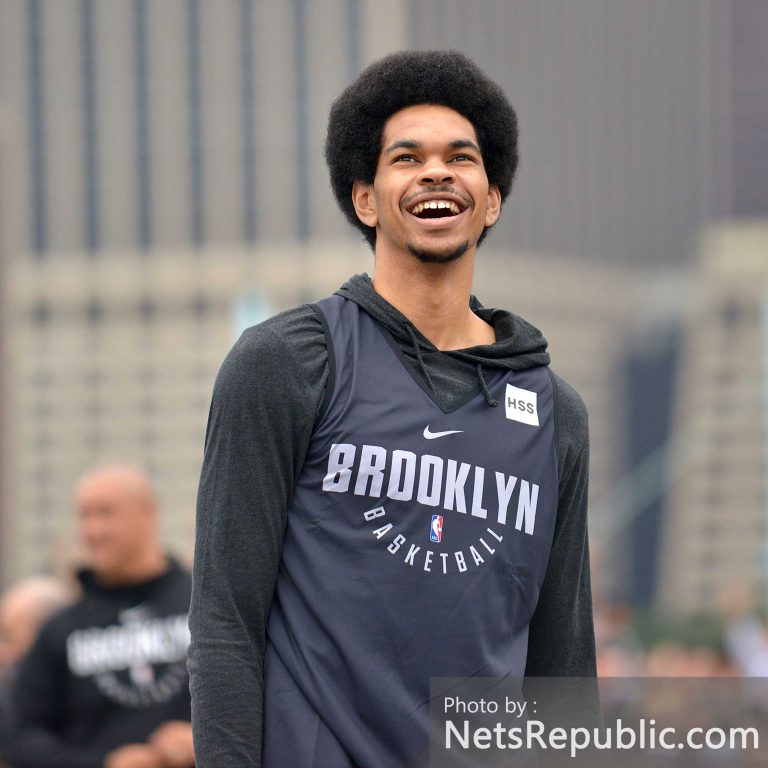 Just a few days ago I discussed the new meanings to acquire NBA talent and how different franchises, namely the Brooklyn Nets, are banking hard on those methods to get a huge deal of benefits. From getting European players and making them prominent roster pieces to developing own draft picks to snatching undervalued players from other teams that happen to be stuck in G-League squads, the Nets have become a staple of exploiting these new avenues of success.

Someone that I didn’t mention in my last article, though, is one of the best (if not the best, full stop) players of those playing for Brooklyn this season. He’s no other than Jarret Allen, hailing from Austin, TX.

Allen’s story is quite something. We can all agree he is not the average prospect in that he is performing way over what we could have expected from him from day one. Yes, but we must also concede that he wasn’t that far off the radar, to begin with.

By the Recruiting Services Consensus Index (RSCI), which ranks recruits yearly based on an average of rankings coming from different scouting services and websites, Jarrett Allen was deemed the 15th-best prospect of the HS class of 2016, committing to the University of Texas where he became a one-and-done. Too bad for the Longhorns, they missed on the Natty after having made it for the past three seasons.

At Texas, though, Allen saw the floor with other highly ranked players in their respective classes such as Andrew Jones (No. 26 in 2016), Kerwin Roach Jr. (No. 39 in 2015) and Shaquille Cleare (No. 34 in 2012). Although Jarrett Allen numbers were not eye-popping (he averaged 13.4 points, 8.4 rebounds and 1.5 blocks in 33 games), he showed some upside during his lone college season.

While his scoring dragged him down a little, he still was one of only 14 players to average those statistics during the year. Between the rest of the names: Bam Adebayo, Miles Bridges or John Collins. The former and the latter would go on to be selected before Allen in the 2017 draft and Miles Bridges would turn into a lottery pick in 2018. It doesn’t take a genius to discover that level of performance, but it seems like everybody was sleeping a bit on Allen.

We can dig a little dipper. Considering total numbers instead of averages, Jarrett finished the season with registers of 442 points, 278 rebounds, and 51 blocks. In this case, only 21 players ended the 2016-17 year with 400+points, 250+ rebounds, and 50+ blocks. Allen, you bet, was one of them. And the problem, again and to the eyes of most, was his poor scoring outcome. While in the aforementioned group as the only freshman with Adebayo, he ranked 18th out of 21 in total points.

Since 2010, though, there have only been 19 players to surpass the threshold as freshmen. Again, under-the-radar production spotted by Brooklyn since the early days. No wonder what Allen is doing in the NBA when between those 19 guys you find names as those of Anthony Davis, Karl-Anthony Towns or this season’s phenom Zion Williamson. The clues were there.

Come draft season, both mock drafts and big boards put Allen just outside of the lottery range, between the 15th and 20th spot in most cases. As in any sport, draft picks’ value drops the further they fall in the selection order. Barring the first pick and potentially the rest of the top five, the rest of the draft selections tend to be a crapshoot in the best of scenarios. 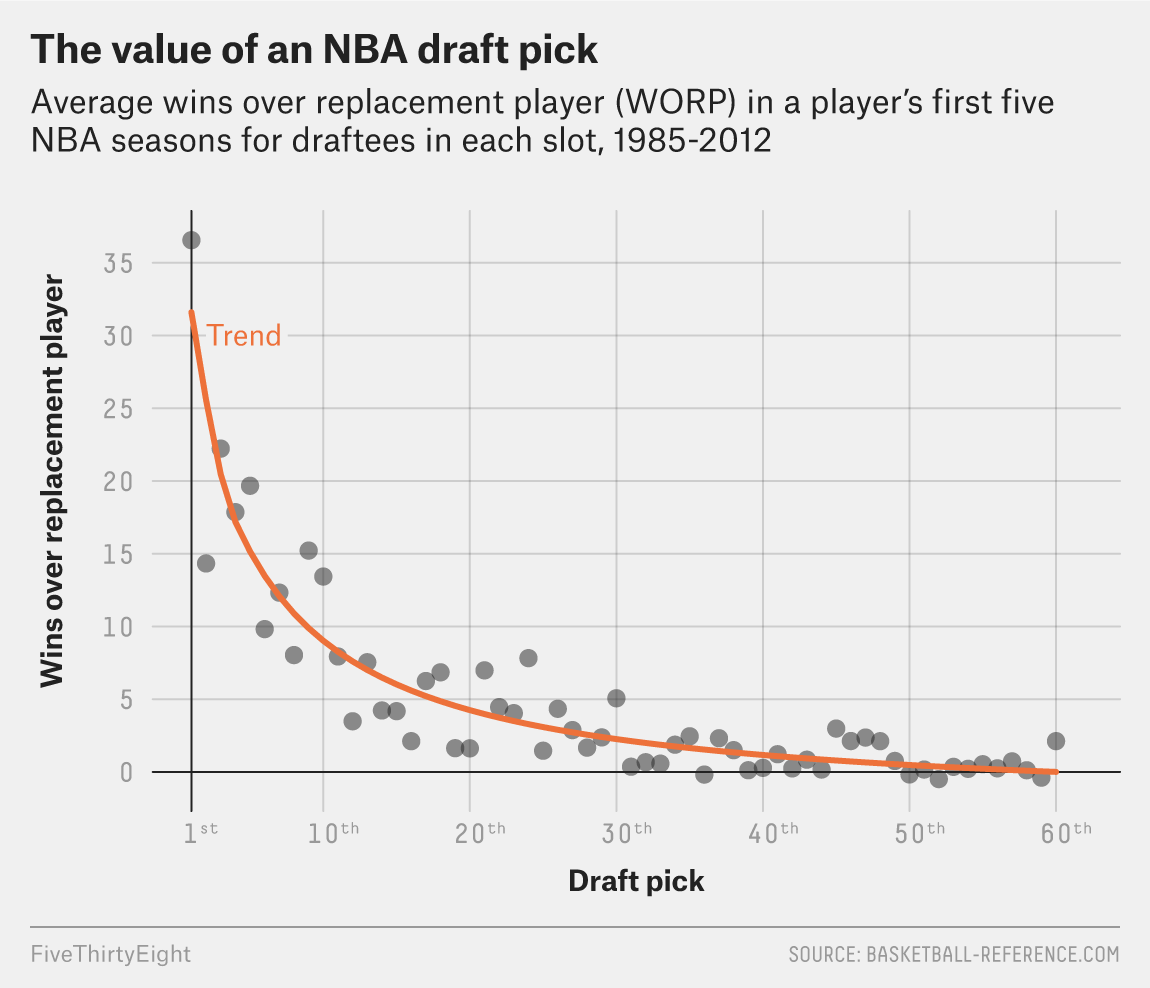 The Nets arrived at the 2017 draft night with the 22nd pick, definitely something to not get too excited about. Only they had done their homework.

At that position, the average selected player (thanks to a study made by 82games.com) has a 0% chance to be a star, 20% of becoming a solid one, 15% of turning into a role player and most probably with a 65% chance just becoming a deep bench guy. Not only has Jarrett Allen defied all those odds, but he has also become one of the best players of his class.

By the time the Nets’ were on the clock, the likes of Lonzo Ball, Jayson Tatum or big-man Lauri Markkanen were already off the table. Other good-to-be players were available, such as OG Anunoby, Kyle Kuzma and Jordan Bell. Brooklyn took the gamble on the guy with the prominent afro, making him the last Longhorn to be picked since Myles Turner was selected with the 11th pick by Indiana back in 2015 (another big from Texas, Mo Bamba, would later become another lottery pick in 2018 keeping with the Longhorn tradition of producing sure-thing big men).

Yes, it’s only been two seasons (not even full yet), but the numbers speak for themselves. If Brooklyn is not the ultimate winner of the 2017 draft up to this point it must be close.

Since being drafted, Allen has 11.2 Win Shares, only behind Jayson Tatum who was picked 3rd by Boston. In terms of WS per 48 minutes, though, Allen just breaks the mold and is second only to Thomas Bryant (who has only 75 games to his name) with .163 WS/48, surpassing the numbers of old foes Bam Adebayo (.159) and John Collins (.156). Any other advanced stat such as Box Plus/Minus or VORP also ranks Jarrett Allen as a top-2 player in his class. He keeps being one of the lowest average scorers among his peers (he’s got a career average of 9.6 points per game) but on the contrary, he’s one of the deadliest and most efficient shooters holding a 59 FG% from the field.

Always keep in mind where Brooklyn picked Allen. 22nd. At the tail end of the first round. Scouting doing what scouting is supposed to do. Oh, and Jarrett happens to be only 20 years old, 21 by seasons’ end. He’s one of the jewels of Brooklyn and definitely the future of the league at the center (if that is still something) position.

All in all, and as I wrote in my last article, the Nets know what they are doing and they are doing it to the greatest of capabilities getting the most out of it. Dzanan Musa and Rodions Kurucs are just two more examples of hitting the right buttons at the right time. Kurucs, most of all, has been praised as anyone lately. The Latvian, a 40th pick in the last draft, was part of the All-Star festivities and has started 35 of the 52 games he has played for Brooklyn in this his rookie season, increasing his minutes and production each passing day.

With the playoffs not locked but almost a sure thing in Nets’ horizon (the team sits 7th in the East, four games over Miami and Orlando with around 12 games yet to be played), Brooklyn will find itself just outside of the lottery again this next summer when Adam Silver calls the franchise’s name on draft night.

The foundation of this team is already in place, young and strong, and has as much upside as one could project. The addition of top-tier free agents is a serious possibility for the first time in years. But even if that doesn’t happen, you don’t have to worry much. Jarrett Allen, more than anyone, is reason enough to trust this front office and decision-makers when the time comes, and another chance is just around the corner to go and steal one more gem.

The draft can be a literal lottery, yes, but back-to-back premium selections on low slots prove the Nets know what they are doing, and the rewards are starting to come Brooklyn’s way.

One month from now the playoffs will roll and the Nets will once again be part of the field fighting for the chip. This season may be early to ask for a lot but given the franchise evolution and their savvy methods, don’t rule out a run in the nearest of futures. We can only trust this team.