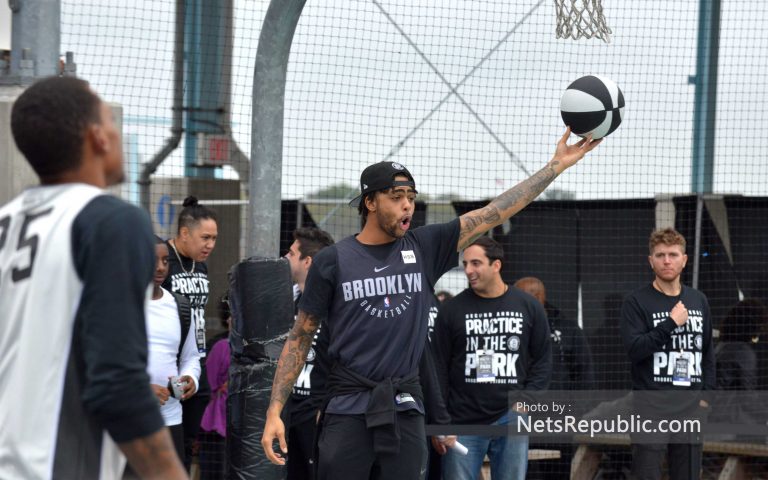 Every team’s franchise player has that signature moment that one can look back on and remember exactly where they were when they witnessed it. The prominent players in Nets history have all had their signature moments or games. For Vince Carter, it was hitting the game-winning shot in his return to Toronto. For Jason Kidd, it was his 38/14/14 games against the Suns in 2006. Now D’Angelo Russell has his Nets moment in a game that’ll go down as arguably the greatest in Nets history.

By the time the 3rd quarter rolled around in the Nets/Kings game, the night seemed lost. It was past midnight on the east coast, the last play-in-game on the night for the NCAA tournament had ended and the nets were down by almost 30. Any sane fan and person would have just cut the game off and go to bed. And many in Nets Nation did. However, those insane fans that stayed up and powered through the game were treated to something truly special.

From the first quarter, it didn’t seem like the Nets had anything going. Before the quarter was over they were down double digits. Coming out of halftime was when the game really shifted. The Kings started the 2nd half on a 20-0 run which had the Nets searching for answers. When the 4th quarter started the Nets were down by 25 points and were most likely just trying to make the final score respectable. Atkinson rolled out a very unorthodox lineup of Russell, Hollis-Jefferson, Kurucs, Graham, and Dudley. Basically a lineup with one guard and 4 power forwards. That seemed to be the magic formula as the Nets would go on to execute the greatest comeback in Nets history.

Leading the charge for the Nets in that fourth quarter was none other than their All-Star guard D’Angelo Russell. Entering the final period Russell had 17 points on the night but exploded for 27 points in the fourth. He shot 10-15 from the field and during one stretch scored 16 straight points for Brooklyn. It was something like a video game as Russell was scoring in a multitude of ways. Whether it was driving to the basket for a layup or hitting a pull up 3s in transition, the Kings defense had no answer for Russell. With every made shot and every defensive stop you could just feel the electricity in the arena. The buzz and groan of the crowd as Russell orchestrated a comeback the likes of which is extremely rare.

Russell’s 27 points in the fourth quarter were the most points scored in a single quarter by any player this season. During the game, Russell also broke the Nets single-season record for made 3-pointers (201) set by Allen Crabbe last year. D’Angelo finished the game with a career-high 44 points, 12 assists, 4 steals, and 3 rebounds. He also had his 4th 40 Point & 5+ Assist game and he’s only 23. By comparison, he now has more 40 Point/5+ Assist games than Kobe Bryant did at that same age.

Not to go unmentioned however was the play of Russell’s teammates around him. Hollis-Jefferson, Dudley and Treveon Graham were guys who had fallen out of the Nets rotation as of late but contributed in a big way down the stretch. Dudley had 2 huge 3-pointers late in the game and had a plus/minus of +27. Graham played some lockdown defense and was a +21 even though he didn’t score a single point. Lost in the hype around Russell is the fact that Rondae had arguably his best game of the season. He was also the hero of the game as he hit the game-winning layup with 0.8 seconds left. If the Nets comeback was a dessert D’Angelo would be the ice cream, Graham is the sprinkles, Dudley is the chocolate syrup and RHJ was the cherry on top.

According to ESPN stats & research, the Nets became the 4th team in the shot clock era to overcome a 25 point deficit in the 4th quarter. Before this game, teams trailing by 25 or more points entering the fourth quarter were 3-3,028. The Nets had also been 0-178 in games where they trailed by at least 25 points at any point in a game. Years from now this game and performance by Russell will definitely be on NBA Classics.