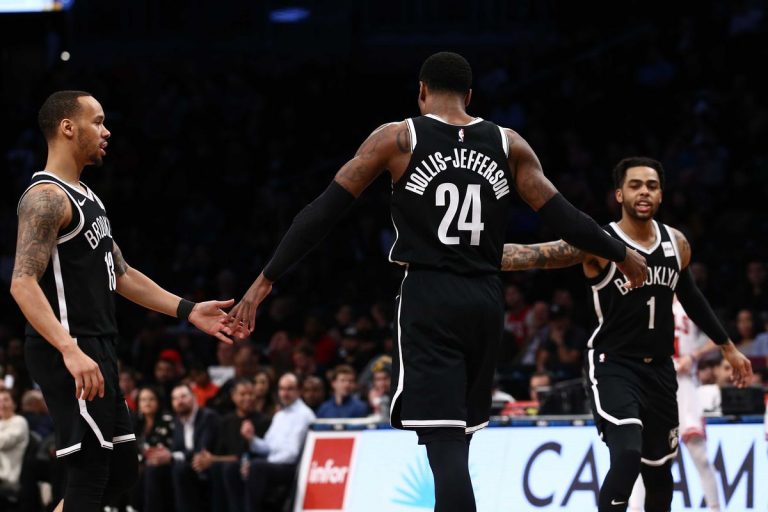 As the Brooklyn Nets head into their final 10 games of the season with the playoffs in sight, it is time to review the lineup combinations that have succeeded, failed, or just kept things afloat. Shown below are the five-man lineups that Coach Kenny Atkinson has played for at least 100 possessions this season. All statistics are from Cleaning the Glass unless otherwise noted, and exclude garbage time and possessions at the end of quarters likely to end up in a heave.

The most impressive lineup this season, by a significant margin, has been the fivesome of Russell/Dinwiddie/Harris/Carroll/Allen.  Prior to Sunday’s devastating loss to the Los Angeles Clippers, this lineup had only played 93 possessions.  After playing 19 possessions together Sunday, this lineup is currently sitting at +33.6 points per 100 possessions (98th percentile in the league) and is allowing only 79.8 points per 100 (100th percentile). Interesting to see how much run this group gets down the stretch based on the ridiculous defensive results so far.

The second and third strongest lineups this season include D’Angelo Russell, Allen Crabbe, Joe Harris, and Jarrett Allen, and either Jared Dudley or Rondae Hollis-Jefferson. The Dudley lineup surrounds Allen with four shooters and despite Dudley shooting the 33.6% from beyond the arc, which is the lowest rate since his rookie year, the team is +1.1 per 100 possessions better when he is on the floor (5th best mark on the team).

Although the concern for Nets fans most of the season has been the defense, none of the 10 lineups listed rank higher than the 62nd percentile in offense. Surprisingly, the strength of each of the top three lineups is the defense, for different reasons. The success of the Hollis-Jefferson lineups is fueled by forcing turnovers, while the Dudley unit ranks in the 97th percentile in effective field goal percentage against (eFG%).

Three of the top six lineups include a Russell-Dinwiddie backcourt, easily the Nets two highest profile players at the current time. It would be remiss not to mention that D’Angelo Russell is in the midst of an All-Star campaign at the age of 22, which has also seen him remain the healthiest in his career since his rookie campaign in 2015-2016.  Per Basketball-Reference, he is currently ranked second in the NBA in assist percentage, ninth in three pointers made (sixth in attempts), and 19th in offensive box plus/minus, with an assist to turnover ratio that has improved from 1.7x to 2.3x.  Although he has defensive limitations and has struggled to get to the free throw line, he has provided high volume floor-spacing and moderate efficiency as a go-to scorer, while showcasing the handling and distribution ability that originally made him such an exciting prospect.

Spencer Dinwiddie is a very different player from Russell.  He is able to get to the rim almost at will and is a highly efficient scorer, ranking in the 91st percentile in the league in points per shot attempt, despite maintaining a high usage rate.  Although neither currently looks like a plus defensive player, they are part of one of the stingiest five-man lineups in the league.

Treveon Graham is included in the 8th and 10th worst lineup combinations, which also rank as the two worst defensive lineups.  Despite a reputation as a solid defender, both the defense and offense have been worse when he is on the floor.  Graham was coming off of a 2017-2018 season where he shot 45.2% from 3 with the Charlotte Hornets, in only 15 minutes a game, when the Nets signed him to a two-year contract for $3.2 million. He profiled as a low-risk player with 3-and-D upside who could guard multiple positions, but has struggled with injuries and inconsistency on his way to shooting 26.3% from 3 this season (7th percentile in the league).

The lone Ed Davis lineup combination is currently -2.3, despite strong defensive numbers. Although Jarrett Allen profiles as a future elite-level rim protector, Davis has the best on/off differential on the team at +6.0 while anchoring the Nets bench mobs, driven by the defense performing 8.8 points better when he is on the floor (97th percentile).

While Allen has been a highlight machine this season, he ranks last on the team with a -4.5 on/off differential and the defense is 6.0 points worse with him on the floor. Part of this contrast is due to the strength of the Nets bench units, but as the playoff atmosphere starts to grow and teams start to shorten their rotations it would make sense for Davis’ to get increased minutes to close out the season.  DeMarre Carroll is second on the team in on/off differential behind Davis, and increasing his minutes in the stretch run could be another key adjustment for the team.

With 10 games to go and the Eastern Conference playoff picture murkier than ever, it would make sense to for the Nets to push the combinations that have worked so far.  A heavy dose of the Russell/Dinwiddie backcourt, a shift of some minutes from Allen to Davis, and more DeMarre Carroll combined with less Treveon Graham could be what the Nets need to finish strong on lock up a playoff spot.