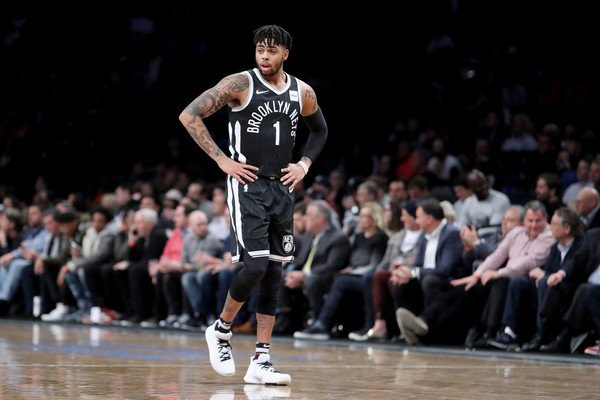 D’Angelo Russell Is Far From A Bad Defender

When D’Angelo Russell was traded to Brooklyn, people knew he was a dynamic offensive player but had serious questions about his defense. Even though he is 6’5 with a decent wingspan, fans and writers alike have questioned his abilities and commitment on defense. Even though the consensus is that he isn’t a good defender, the statistics tell a different story.

According to Synergy Sports Technology, D’Angelo Russell is a very good defender in general. He ranks in the 69th percentile for overall defense — ahead of Terry Rozier, Avery Bradley, Fred VanVleet, and teammate Rondae Hollis-Jefferson — allowing only 0.873 points per possession. Aside from spot up and off screen shot attempts, Russell ranks very good to excellent on every other shot type.

Unlike NBA stats defensive tracking — which is often debated as being inaccurate due to a variance of results compared to other defensive measurement methods — Synergy Sports Technology uses video clips to back up every single statistic and measurement. They are essentially the gold standard of basketball statistics because they are statistics that are based in video.  So the fact that D’Angelo Russell ranks so well in their system really does change the narrative that he is a hopeless defender.

Finding specific defensive footage without a coaching subscription to Synergy isn’t easy but you can see his flashes of defensive prowess through the handful of blocks he registered last season. A lot of what he does on defense doesn’t translate into the box score as blocks and steals but still have an impact on the game.

In these clips you see him defend both the pick-and-roll ball handlers and roller. What is the common theme in both is how he doesn’t give up on the play, is focused on trying to poke the ball loose whenever the offensive player exposes it, and doesn’t foul. Russell is very good at not fouling on defense, averaging under two per game.

You see more of the same in this series of clips. Even when D’Angelo Russell is seemingly screened out of play, he is able to recover and make a play on the ball that disrupts what the offensive player is trying to do. Russell is also able to use his long arms to reject or poke the ball loose at the right time to prevent the shot attempt from falling.

It is the same story in isolation situations as well. In the first clip, D’Angelo Russell is matched up with Joel Embiid. Instead of fouling or giving up a basket Russell is able to poke the ball loose at the right moment to prevent an easy basket. On the next play, Russell is matched up with Michael Kidd-Gilchrist and there is a similar result. Russell is able to poke the ball loose as Kidd-Gilchrist attempts to lay it up and prevents the shot from ever happening. In the last clip, we see something the proves D’Angelo Russell has both good instincts and ability on defense following a kick out pass to Wayne Selden. Russell is able to knock the ball out of his hands before he can even shoot it.

D’Angelo Russell might not be a lockdown defender but he is far from helpless. He has all the physical tools to hold his own against most offensive players and has good enough instincts to make up for anything he might lack physically. When he is focused on the defensive end, it is hard to score against him. Given how hard Russell has been working to get in the best shape of his life this offseason, I wouldn’t be surprised to see him come out of the gate as an even better defender. Brooklyn is going to need him to be focused on both ends of the ball next season if they are truly going to be a dark horse playoff candidate.