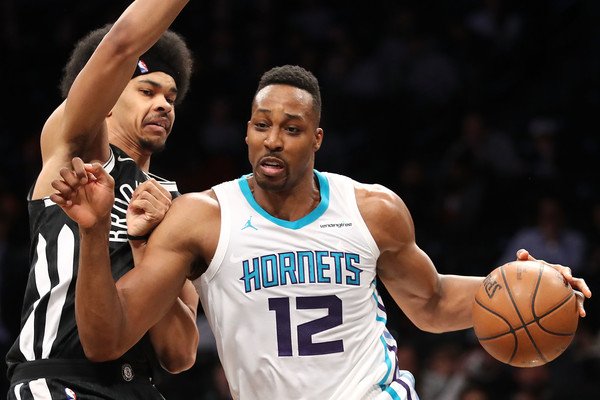 If 2017-18 forged a beacon of hope out of the Brooklyn Nets roster, it mostly used Jarrett Allen as a muse. Sure, Most Improved Player award finalist Spencer Dinwiddie broke out to play as Brooklyn’s actual best player last season. However, with Dinwiddie still projecting as an unrestricted free agent in the summer of 2019 and already being 25 years old, the safer bet is to pin future hopes on Jarrett Allen right now. And there are viable reasons to make that bet besides “I guess he is the default”!

Jarrett Allen spent the majority of his rookie season as a 19-year-old flashing all the go-to qualities of a modern big-man. Jarrett can explosively dunk from even a standstill!

Jarrett can use his 7’5″ wingspan to swat any paint trespassers’ shots!

Mister Allen has even flashed development of his jumper under Coach Atkinson after a good free throw shooting year!

Meeting the threshold of being able to run, jump, and shoot would get most to categorize Jarrett Allen as a home run pick as the 22nd overall selection of the 2017 NBA Draft. That skill-set with the standard skill and IQ incrementation of young players should lock Allen into at least a long career as an NBA starting center. However, for Allen to reach “worthy franchise cornerstone” status, the biggest weakness he must improve is playing with appropriate physicality.

The Nets felt hopeless against any center with a modicum of rebounding prowess. Andre Drummond and Dwight Howard would each celebrate TWO 20-rebound performances against the Nets last season. The Nets allowed a player to nab 15 or more rebounds 18 times during the season. The main culprit for such glass woes would be in the doe-eyed Jarrett Allen getting eaten alive by the lions. The Brooklyn Nets’ defensive rebounding rate tanked over four percentage points with Jarrett Allen on the floor, according to Basketball-Reference. An especially egregious mark with Tyler Zeller being the next most played center in Brooklyn’s 2017-18 season.

Putting a consistent body on his man proved a tall task for Allen once a shot went up.

While susceptible to ball-watching or chasing after futile blocks, Allen primarily could not help getting tossed out of the way on box-outs.

Overall, Jarrett Allen only grabbed 26.7% of the contested rebounding opportunities that came his way, according to NBA Stats. Jahlil Okafor, Tyler Zeller, Timofey Mozgov, and even 6’7″220-pound Rondae Hollis-Jefferson all exceeded that rate last season. A distinct lack of strength, concentration, and aggression combined to create a rather underwhelming presence on the glass.

With the former McDonald’s All-American’s mobility and length, Allen excelled at cutting around the rim to create open shots at the rim for himself, which he had no issues converting. However, issues did arise when the rookie center had to score around a defender or two in the paint. According to NBA Stats, Jarrett Allen missed 16.6% of his dunk attempts in the 2017-18 season. Such a rate of missed dunks would rank Allen as 4th worst among the 30 common starting centers of the league, ahead of Marcin Gortat, John Collins, and just scooching past Kevin Love. Now, dunk volume definitely matters more than dunk efficiency in the grand scheme of winning basketball. Yet, the dunk rate relays Allen’s tendency to take too long a gather and rarely go straight up when finishing, as shown below.

The too long gathers may be a reason why Allen often prefers to try to use his length on one-armed extension dunks. The extension dunks allow Allen to attack the rim quicker to avoid rotating defenders. Unfortunately, the one-armed attempts also limit him more often to one-foot explosion instead of two-feet.

The too soft approach around the rim worsens once Jarrett Allen opts for layups instead. Allen converted just 47.9% of his layups in his rookie season, according to NBA Stats. The talented center would just not attack with consistent force.

The finishing at the rim and rebounding will both improve as the now 20-year-old adds strength to his 230-pound frame. Still, strength acquisition must be coupled with a determination to rise straight up through the possibility of contact. Jarrett Allen must channel his inner bully around the rim to become a star.