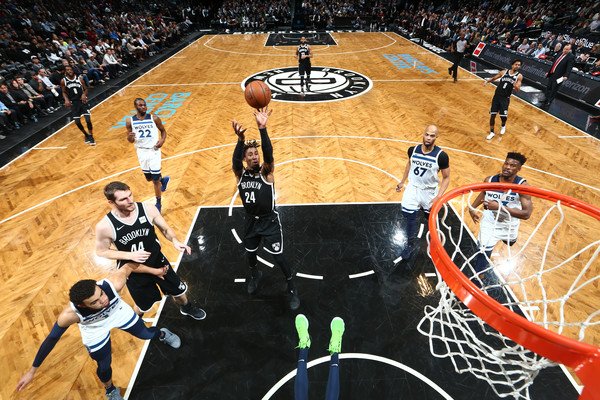 Rondae Hollis-Jefferson And The Progression of His Jump Shot

Rondae Hollis-Jefferson is going into his fourth NBA campaign, the key to unlocking his full potential still revolves around his shaky jumper. The 23rd overall pick in the 2015 NBA draft has steadily improved since the Brooklyn Nets acquired him from the Portland Trail Blazers in exchange for then-Net Mason Plumlee and the draft rights to Pat Connaughton, but questions remaining the reliability of his jump shot still remain.

Last season with Brooklyn, Hollis-Jefferson appeared in 68 games, averaging career highs of 13.9 points, 6.8 rebounds, and 2.5 assists while shooting 47.2 percent from the floor. The combo forward’s athleticism has allowed him to flourish at the rim since he entered the league, but an improving jumper has provided newfound space between him and his defenders.

According to Synergy Sports Technology, during his sophomore season with the Nets Hollis-Jefferson shot just 27.4 percent (67-242) and generated an abysmal 0.633 points per possession, ranking him in the eighth percentile on jump shots. Even the three-points and shots from distance that he did make looked unnatural.

And his misses looked even worse.

Last season, the forward shot an improved 40.6% (143/352) on jump shots and produced a slightly improved 0.839, finding him in the 30th percentile according to Synergy Sports Technology. While the improvement in both shooting percentage and PPP is a positive sign, Hollis-Jefferson’s struggles from beyond the arc remain the biggest question mark. His shot looked improved and most of the issues with his mechanics had been corrected, as seen in this video of a few of his three-point makes from last season.

While his jump shooting numbers as a whole improved thanks to a more consistent mid-range jump shot, Hollis-Jefferson’s three-point numbers showed no sign of improvement from his second season to his third. In his three seasons in the league, Hollis-Jefferson has posted three-point percentages of 28.6 (4-14), 22.4 (15-67), and 24.1 percent (13-54).

To get a better grasp of the issues surrounding Hollis-Jefferson’s jumper, here are two video clips of his shooting stroke from both the mid-range area and from three on the right side of the floor. The first shot is from an area where Hollis-Jefferson shot 10 for 15 (66.7 percent) on the season, his best spot on the floor from mid-range and the second shot is from his best area shooting from three, 4 for 12 (33.3 percent).

The mid-range jump shot looks mechanically clean aside from a residual amount of hitch clinging on from his mechanics when he first entered the league, but nothing too obnoxious.

His three-pointer mechanics, in comparison, look much less smooth.

When Hollis-Jefferson releases the ball, the left half of his body — especially his shoulder — shutters as if he’s trying to force the ball to the rim. It almost seems like he doesn’t feel that his normal jump shot has enough power to reach the rim from beyond the three-point line so he tries to make up for it. His knees come in towards each other and almost click together when he goes up for the shot. At some times, Hollis-Jefferson’s three-point shot looks amazing and all of his mechanics are clean. But the issue is that his jump shot doesn’t look consistent and often reverts back to the issues that plagued him in the past.

Many young players — even ones that are good shooters in college or their first few years in the league — have a slight hitch in their jump shot. Two seasons ago, Hollis-Jefferson’s hitch was much more pronounced but he worked in the offseason to correct it. It’s a possibility that Hollis-Jefferson could have gotten rid of the remnants of his hitch during this offseason, but we won’t know for sure until we see him in game.

If Rondae Hollis-Jefferson can become an average shooter from deep and hang around 30-35 percent for the season on a decent sample size, his game would reach the next level. If his three-point shot can start falling consistently, defenders will have to respect his shot to a greater extent and Hollis-Jefferson will be able to get past his defenders with even more space available. It’s fair to expect that he could be a 20-6-3 player sooner than later and if the Nets can gain some traction in the East with Hollis-Jefferson at the helm, he may even be able to squeeze into the All-Star game.

In short, Hollis-Jefferson’s jump shot throughout last season was much improved than his previous year, but there is still a good bit of room for improvement when it comes to his three-point shooting.