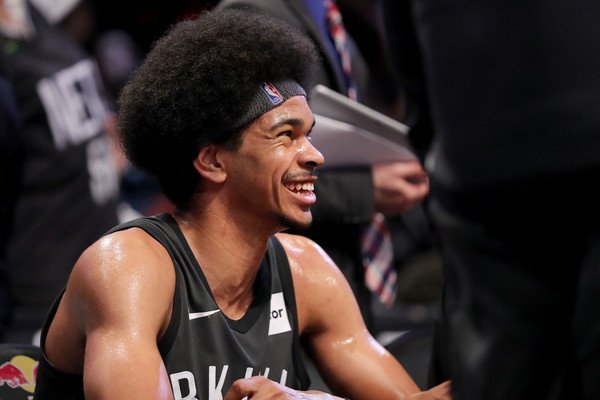 When Jarrett Allen was selected with the 22nd pick by the Brooklyn Nets in 2017, fans and writers were questioning everything from his commitment to basketball, to how his game would translate to the NBA level. A majority of analysts and fans thought he would have to spend a good chunk of time with the Long Island Nets, but that chatter was put to rest almost immediately after Allen took the court as a rookie. He and his fro exploded onto the scene with his dunks and blocks, and he forced his way into the starting lineup following the All-Star break.

He did an excellent job of playing to his strengths — not trying to do too much, and being effective when given the chance. Going into year two, Allen looks like one of the future cornerstones to this team, and it is imperative for him to improve on what he has already accomplished and become a more well-rounded frontcourt player.

Last season, Allen was very good at two things in particular on offense: scoring out of the pick-and-roll and scoring off of cuts. Pretty much all of his highlight plays came out of the pick-and-roll, where he would set a good screen, then get spoon-fed an incredible pass from either D’Angelo Russell, Caris LeVert or Spencer Dinwiddie that ended in a high-percentage shot attempt or a showstopping alley-oop.

As we see above, the combination of smart and well-timed passes with Allen’s positioning and skillset as a roller proved to be deadly for a lot of teams. What makes him even deadlier out of the pick-and-roll is Brooklyn’s jump shooters and dynamic ball handlers. Other teams’ defense can’t collapse in on Allen without freeing up the likes of Allen Crabbe or Joe Harris from deep, or double Allen after the pick because LeVert, Russell or Dinwiddie can pull up on a dime or drive to the hoop when given an opening like we see below.

Orlando’s defense not only stayed with Allen but also tried to force a charge, which is ill-advised against the likes of Russell given how shifty he is.

Scoring off of cuts was the other way Allen got it done last year. Much like how he scored out of the pick-and-roll, a lot of this was based on spacing and the rest of Brooklyn’s weapons. There were many times last season that LeVert or Russell would bait the defense into committing to their shot attempts, only to dish it to a cutting Allen for an easy dunk or layup at the rim. Pair their unique passing abilities with Kenny Atkinson’s offense that spaces out the defense and forces defenders to play three or four players to the three-point line at any given moment and it really opens up the paint for Allen to cut with ease like we see below.

Allen was the only player on the roster last season who could finish these kinds of looks or command any sort of attention in the post, but that doesn’t mean he was perfect. He still needs to work on finishing around the rim better and developing either a polished face-up or post-up game. We saw some flashes of Allen’s jumper last season and even a few three-point attempts, but nothing with great regularity. The same goes for his post-up game.

According to Synergy, post-up attempts accounted for less than one percent of his offensive production. He only attempted four shots and completed 25 percent of them. This is probably due to his lack of overall strength compared to some of the more imposing centers in the league. One area he struggled with on both sides of the ball was dealing with traditionally strong centers like Joel Embiid, Andre Drummond, Dwight Howard and others.

If Jarrett Allen doesn’t get stronger, that doesn’t spell the end of his offensive production. Like I mentioned earlier, Allen could go the face-up route and still be very effective. According to Synergy, Allen attempted 25 spot-up shot attempts — a shot type typically associated with jump shots — and had some success. He had a PPP of 1, which ranked as good in Synergy’s system.

For Allen to take the next step as a player, he needs to add to his game, and Brooklyn has to continue to play to his strengths. Dunking over everyone who walks is great, but eventually, teams are going to figure out a way to contain that tactic unless he can make opposing defenses worry about something else. Adding either a post-up or face-up aspect to his game will not only open up more for him personally but the team as a whole.

The Nets have been dying to add some sort of stretch big to their roster since it became clear Brook Lopez was going to be moved. And, since Lopez left Brooklyn, there hasn’t been a reliable low-post scorer or true stretch big in Brooklyn. If Allen develops a low-post game, it will suck defenders in from the three-point line and allow more open shots for Brooklyn’s many shooters. If he develops a face-up game, that will open up the lane for drivers and cutters from the perimeter and keep defenses from loading the paint against him or anyone on the team.

The future is very bright for Jarrett Allen. If he can do polish his game and continue to develop as a defender, the sky’s the limit for him. He could end up being one of the most important players of this Brooklyn rebuild and one of the top centers in the East when it is all said and done.