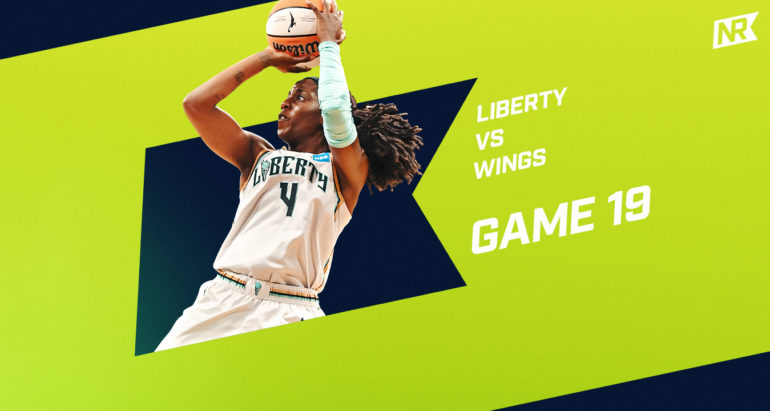 The New York Liberty and the Dallas Wings have a lot of things in common.

It’s not a surprise then that Monday’s game between the two teams ended up being a tight-fought contest, with the Liberty coming away with a 99-96 victory.

So, what all happened in the win?

The New York Liberty Make a Bunch of Threes

The New York Liberty made a lot of threes on Monday.

Like, a lot of threes. A franchise-record amount of them:

For an offense that’s predicated on the three-ball, it must feel good to see something like this happen.

On the season, New York is second in the league in three-point field goal attempts per game at 28.3 of them. They’re shooting 36.6 percent on those threes, which is the fourth-highest mark in the league.

This is especially good for this Liberty franchise after last season’s struggles from deep. The team ranked second in attempts from deep last year too, but shot a league-worst 27.7 percent from three.

But when you add players like Betnijah Laney and Sami Whitcomb in the offseason, that shooting percentage is bound to go up.

Whitcomb in particular was huge on Monday, going 6-for-11 from deep on her way to 26 points. Whitcomb is obviously one of the WNBA’s best shooters, so there’s not really a ton to say about her shooting the ball in this one. She did something she’s good at and she did it well.

There was this fun shot from her that didn’t exactly make sense:

My biggest takeaway from the three-point barrage isn’t Whitcomb though. It’s Jazmine Jones.

Jones was 3-for-7 from deep in this one. This was her second game in a row making multiple threes and the fifth time this season for her to do that. She’s now shooting 42.5 percent from deep.

Jones shot 37.8 percent from three in her final year at Louisville, but that came after two seasons of sub-30 percent shooting. Coming out of college, I don’t remember hearing a ton about Jones as a shooter. And as a rookie, she didn’t shoot well enough to really make much of a mark, but that’s changing this season, and her play was a big part of why the Liberty managed to win this one.

Sabrina Ionescu is Back on Track

There was a long stretch of time where it seemed like Sabrina Ionescu would never score 10 points in a game again, as she went seven games in a row with single-digit point totals. Factor some missed games in, and it was almost the whole month of June that Ionescu was in what can only be called a shooting slump.

But she’s now scored in double figures in three of the past four games, shooting over 50 percent in all three of those games. The efficiency is returning, and that’s good news for the New York Liberty, especially when you factor in that they’ve won those three games.

Ionescu got in on the three-point action on Monday:

But maybe the most important contribution for Ionescu in this one was her passing. She tied her career-high in assists with 12 of them:

Just an impressive collection of passing here. Finding cutting wings. Getting the ball to the roller on the pick-and-roll. Spinning away from defenders to hit an open player in the corner. Hitting the full-court outlet.

Ionescu’s scoring can be really fun sometimes, like when she’s draining a long three to win a game. But her ability to make plays and find her teammates is going to be the thing that makes her a star in this league. Ionescu can put the ball anywhere. She can start driving then notice a player across the floor and can make the tough pass over to her. She can zip one into a big at the basket even if it doesn’t look like she should be able to make that pass. The New York Liberty need her to keep playing like she was on Monday.

New York won, but it wasn’t all gravy for them. The whole “issues defending inside” thing struck again, as Dallas got 23 points from Izzy Harrison.

The Wings started their center-less lineup once again, with Kayla Thornton and Satou Sabally as the frontcourt. But Harrison played 27 minutes off the bench, including playing most of the second half. Dallas closed with a Harrison/Thornton frontcourt because…well, because with Natasha Howard out, New York has some issues inside.

I mean, Harrison doesn’t really have a reputation for being an elite offensive big, but on this play she gets the ball at the top of the key and takes Reshanda Gray one-on-one to the bucket. I like Gray, but she’s not really a rim protector defensively.

And this really speaks to a larger issue. Even when Howard returns, will the interior defense still wind up being a liability for this team. Howard’s great, but her blocks dropped to 0.6 per game last year. Does New York have anyone who can get in there and stop the league’s elite centers? Or will that wind up being the team’s biggest need come next offseason? There’s a draft with some good bigs—NaLyssa Smith, Elissa Cunane, and Shakira Austin should all end up in the 2022 class—so there’s the potential to answer that question there.

But for now, this is a concern. It’s an even bigger concern until Howard is back, and it’s also the one argument against the team recently waiving Kiah Stokes, as Stokes was a little more of a deterrent at the bucket than Gray is, even if Gray is arguably better at essentially everything else.

The New York Liberty need something to change inside. Otherwise, they’ll continue to paddle around .500.

Up Next: The Olympic break is almost here, but the Liberty still have two games before then. The first is Friday night, as the team faces the Indiana Fever on the road at 7:00 PM ET. You can catch that one on NBA TV.