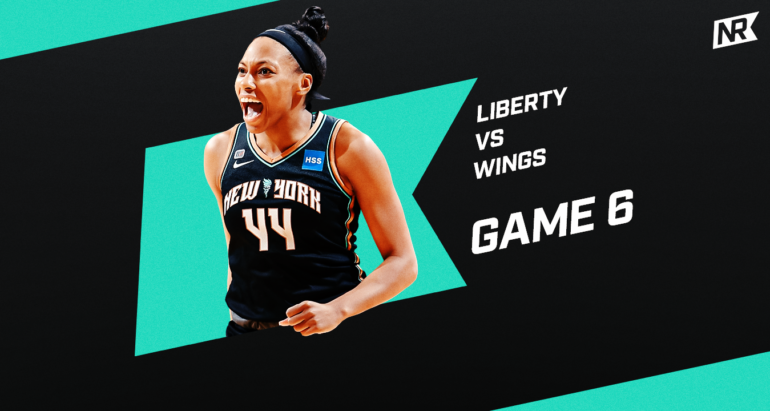 The resilient New York Liberty ended a daunting stretch on a strong note, topping the Dallas Wings in the latter part of a back-to-back.

A battle of the WNBA’s future produced a thrilling contest in the present.

Forced in a situation that had them playing three games in three cities over a four-day span, the New York Liberty emerged victorious in the final leg. Betnijah Laney paced all scorers with 26 points, and she was aided by 17 from Natasha Howard and 15 coming through Sabrina Ionescu en route to New York’s 88-81 victory over the Dallas Wings.

Monday’s game was originally scheduled for Tuesday but was pushed back due to the Brooklyn Nets’ playoff activities. The tired but relieved Liberty (5-1) took two-of-three matchups in the fast tour, previously topping Chicago on Sunday.

There have been few certainties in the latter years of the New York Liberty’s 25-year ledger. Just look at what they had to deal with in scheduling Monday’s game.

Betnijah Laney’s scoring breakout, however, has been a welcome staple, as the Liberty newcomer has moved past the 20-point plateau in each of her first six games in seafoam and black. It’s the longest streak to open a season in Liberty history and three away from tying Cynthia Cooper for the most in league history.

Playing 34 minutes and shooting 9-of-15 from the field in a narrow victory, it’s clear that Laney is the spark that lights the Liberty’s torch. The personal achievements mean little to Laney, who is only satisfied with the 5-1 mark to date.

“It’s always the win first for me,” Laney said after the game. “I’m obviously a part of the scoring threat, but I don’t ever go out and say, ‘okay, I need to get this amount of points, I need to score I need to do this’. I try and get it within the flow of the game and do what my team asks of me.”

DiDi Richards‘ entrances have always drawn the loudest cheers at Barclays Center, but the second-round rookie took it to a whole new level on Monday.

Thrust into a larger role with Howard still shaking international rust off, Richards partook in an infantile career-high 20 minutes on Monday. None of them were more vital than the final two minutes of the first half. With the Liberty trailing by eight, their largest deficit of the evening, Richards dove for a loose ball at midcourt, battling two Wings for possession.

The situation created a jumpball won by the Liberty, who would go on an 8-0 that would foreshadow the early stages of the latter half, when New York built an early lead that would be tested but never relinquished. Richards, the Baylor alumna, also posted five assists, another rookie year high.

“Didi really stepped up to change the energy of the game…the way she impacts the game is going to be unpredictable,” head coach Walt Hopkins said. Richards’ new teammate Sabrina Ionescu, a former college opponent, is glad she no longer has to deal with the former Baylor Bear as an opponent.

Save for her infamous injury game against Atlanta last summer, Monday’s game marked the first time that Sabrina Ionescu played fewer than 28 minutes in a game since February 2020 (a 48-point win over Colorado while at Oregon).

In a rather jaw-dropping development, Ionescu was pinned to the bench during the middle stages of the second half, sitting out nearly 10 whole minutes while the Liberty built a lead that summited at 13. Dallas had limited her to only three shot attempts and five points. Ionescu’s last game in single digits in scoring came back in November 2019.

But when Ionescu was reinserted with circa six minutes remaining (around the time Natasha Howard was lost for the night), she clipped the Wings with 10 points in the fourth quarter, including a crucial stretch of eight consecutive tallies after Dallas came as close as two. She ended the evening with respectable numbers, falling just short of a double-double (15 points, 9 rebounds).

Ionescu noted how crucial it was that her teammates, particularly the reserves, came in to support the lead while she had a rather un-Sabrina Ionescu-like evening.

“We went on a great run when I was out. players like (Jazmine Jones), like DiDi, came off the bench and gave us a huge spark,” Ionescu noted. “That’s what we need…we have great debt in every single position, the depth at the wing spot, the point guard spot, the post spot, I think that’s huge. That’s what we need from them, we need that spark off the bench, we need them to come in and play big time minutes and make big time plays.”

Natasha Howard has put up 14.5 points and 6.5 rebounds over her first two games…a pair of contests in which she has had no practice to prepare for. Alas for New York, Howard was forced to leave the game in the fourth quarter after an incident while setting a pick led to a knee injury. Tests will be conducted on Tuesday to see if Howard will miss any time in the long-term.

Turnovers have been an issue for Howard early on, but her teammates are looking forward to working with her in some sanctioned, structured practices.

“Her presence just speaks for itself,” Ionescu said. “The fact that she’s able to put up those numbers in those little minutes that she had is crazy, and especially in only her second time playing with us, even practicing with us. So we’re just excited to get her back and start practicing and getting familiar with her as she is with us.”

Up Next: The Liberty get some well-earned rest, as four days linger ahead in between contests. They’ll return to Brooklyn on Saturday afternoon to take on the Atlanta Dream in the first of three meetings (2 p.m. ET, YES App/Amazon Prime).