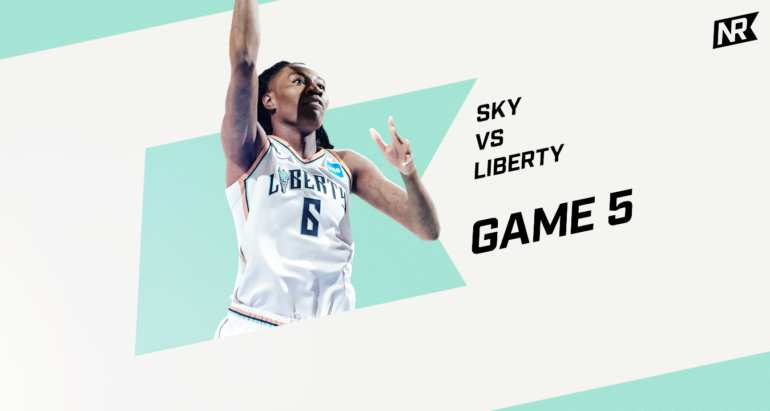 The New York Liberty are back in the win column after defeating the Chicago Sky 93-85 on Sunday. Betnijah Laney led the Liberty in scoring with 20 points, 6 rebounds, and 5 assists. Sabrina Ionescu had a double-double with 19 points and 12 assists, and added 5 rebounds. The Liberty are now 4-1 on the season.

In this young season, this was one of Liberty’s best wins. After their blowout loss against the Washington Mystics on Friday, they quickly rebounded.

Both teams shot 75 percent from three in the opening quarter, and in the second quarter, it was much of the same as both teams traded baskets. New York also committed many turnovers that led to easy points for Chicago. In the third quarter, the hot shooting continued for both teams. A Jazmine Jones three at the buzzer gave the Liberty the lead heading into the fourth quarter. New York stepped up its defense in the final frame and got some key baskets off turnovers. The Liberty firmly took the lead with a mini-run and the Sky never got closer after that.

Here are three key pieces from an excellent Liberty win:

Natasha Howard joined the Liberty lineup for the very first time after completing her overseas obligations. She started out shaky and committed some silly fouls and turnovers, but it’s to be expected considering she hadn’t practiced with the team yet. Howard finished with 12 points and 7 rebounds.

As she gets more familiar with the Liberty and how the team plays, she should perform much better. Howard changes the Liberty’s post presence inside and makes it more difficult for players to score. She and Ionescu should form a formidable duo in terms of pick-and-roll offense. It will be something to watch moving forward.

Coming into this game, Sami Whitcomb already had played well for the Liberty. She is another ball handler and can help take some of the pressure off of Ionescu. She’s also a good three-point shooter. However, Rebecca Allen struggled before Sunday, only playing significant minutes for the first time last game.

But both of them shone in this game. Whitcomb had 9 points in the first quarter and ended with 11 points in total as well as 4 rebounds and 4 assists. Allen came off the bench and had an immediate impact. She hit baskets at opportune times and got some key stops, finishing with 13 points and 4 rebounds. Allen played the most minutes out of the Liberty bench.

New York really struggled with turnovers in this game. Whether it was silly passes or the defense causing turnovers, it was bad. It finished with 22 turnovers to the Sky’s 12. Laney had 7 turnovers, Howard had 6 and Ionescu finished with 4.

The Liberty have to work on making the correct passes and making sure the players are actually catching the ball correctly and not out of bounds. It’s not going to get any easier the more teams they face. When the third quarter began, the Liberty committed two turnovers in less than two minutes, leading to head coach Walt Hopkins calling a quick timeout to get the team back on track.

Things to Keep an Eye On

Next up: The New York Liberty travel home to face the Dallas Wings tonight, Monday, at 7 p.m. ET. It will be streamed live on Twitter and will be on the YES Network. It will also air on WNBA League Pass.