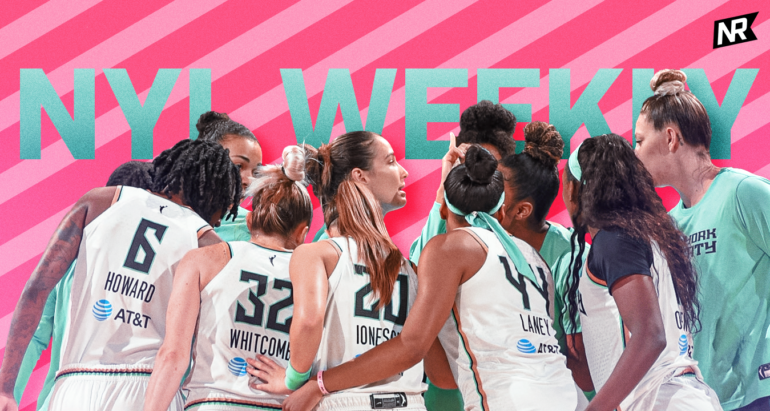 NYL Weekly: Even after Suffering First Loss, the Liberty Maintain Their Momentum

One big positive of never having won a championship? There’s absolutely no blueprint for what a “championship season” should look like.

Even the New York Liberty team that started 7-0 in 1997 couldn’t put it together in the inaugural WNBA Finals, falling to the Houston Comets as the first (and, eventually, third and fourth) casualty of the league’s first dynasty.

Of course, how a team starts the season has next to no bearing on how it finishes. The 2000 Liberty made the Finals after starting 2-4, their eventual 20-12 regular-season record their best to ever yield a Finals appearance. And while a strong start might help boost an overall record come seeding, beyond that, wins in the postseason are a required part of a successful finish.

Maybe. Or maybe it doesn’t matter. Anyone who’s watched this team knows they’re too busy writing their own history in the meantime.

In notching her first pro triple-double in Tuesday’s win over the Minnesota Lynx, Sabrina Ionescu wrote her way into the Liberty and WNBA record books in about a dozen different ways. She was the youngest player in WNBA history to achieve the feat, did it in the fewest number of games, and much more:

How did Ionescu get the job done? Obviously, she’s a well-rounded player suited for this type of success, but notching more than 10 assists with a new group of teammates is a full-team feat of its own. For more, check out Nets Republic’s Justin Carter breaking down the triple-double in his latest New York Liberty Film Room.

Speaking of a team effort, four Liberty players reached double figures in scoring in this one, including Betnijah Laney’s third straight game with 20 or more points. More on her later, because you have to understand (spoiler alert): she did it again in each of the next two games.

The win also marked New York’s first 3-0 start since 2007, and its third in team history. But as I shared last week, the season with the Liberty’s last 3-0 start didn’t end too great, and, um…

Oh no, someone jinxed something

So it’s only one loss, which doesn’t spell the end for a team, especially barely 10 percent into the season. All good things must come to an end (including Layshia Clarendon’s tenure with the team, which NR’s Dani Bar-Lavi and I discussed last week).

Let’s start with the good, and that’s Laney’s fourth straight 20-plus-point output. It was the first time in Liberty history that a player started a season with four such games. Her 90 total points in those games, though, is fourth in team history for the most points to start a season, right behind three instances of…

Okay, yeah, it’s Tina Charles, who tallied 34 points in her first meeting with her former team since being traded to the Mystics in the 2019-20 offseason. The former MVP had her way down low, as New York had no match for her there (though this was also the team’s last game without Natasha Howard, who had recently returned from overseas).

“Nothing was surprising,” head coach Walt Hopkins said postgame. “I told the team she’d probably have between 30 and 40 tonight. The goal was to stop everyone else, and we didn’t do that.”

Wait, no, we’re back on track now

Fresh off a big loss (one that looks either better or worse after knowing the Fever beat the Mystics in the same time slot), the Liberty’s task was simple: Don’t fall into the hole of lengthy losing streaks that have plagued this team in the last several seasons.

Laney led New York with yet another 20-point game, her fifth straight, making her the sixth player in WNBA history to score 20-plus points per game in a five-game stretch. Five more Liberty players joined her in double figures, including Natasha Howard in her first game in seafoam.

In the highly-anticipated first matchup between two former Kelly Graves point guards, the Sky’s Courtney Vandersloot won the assists battle (16), but Ionescu’s 19 points, 12 assists, and 5 rebounds were absolutely nothing to scoff at.

Anyway, if this is how the Liberty rebound from a truly bad loss… whew!

Hear that? It’s the sweet exhale of four full days off.

Monday marks the end of a grueling stretch of three games in four days. The original schedule saw today’s game taking place tomorrow, but the men’s team the Liberty share their arena with need it that day for some reason. (Nah, we love the Nets here. Go Nets!)

Does this mean we might see Leaonna Odom at some point in this stretch of games? Her status was upgraded to “doubtful” after the opening game and has stuck there, but the hope remains that her Achilles injury is nothing to worry about long-term. Odom represents the final piece of getting the Liberty to full strength—at least until Kiah Stokes departs for EuroBasket next month.

But, anyway, today it is, just over 24 hours removed from that big win in Chicago. The Wings have played just two games so far—a rout of the Los Angeles Sparks and an overtime loss to the Seattle Storm. But unlike the team that just didn’t have it together last season, this team, like the Liberty, looks almost contender-ish! (Again, minuscule sample size. Bear with me.)

The Dream, meanwhile, get each of the Liberty’s two most recent opponents prior to Saturday’s meeting in New York (Sky on Tuesday, Wings on Thursday). And while it’s so hard not to employ the transitive property when things line up this well… I mean, you saw that Fever win over the Mystics I mentioned earlier, right? The team the Liberty beat twice beating the team that thrashed the Liberty? Nothing makes sense! Let chaos reign!

No, you didn’t miss the Liberty signing Emma Meesseman… but she seems pretty sure who was responsible for inserting her into Friday’s starting lineup:

And here’s Hopkins on the decision to waive Clarendon, on a question asked by NR’s Geoff Magliocchetti before Friday’s game: